(redirected from Cold neutron source)
The following article is from The Great Soviet Encyclopedia (1979). It might be outdated or ideologically biased.

a source of neutron beams. Neutron sources are used in nuclear physics research and in practical applications, such as neutron logging and neutron diffraction analysis. A neutron source is characterized by a number of factors—intensity (the number of neutrons emitted per second), energy distribution, angular distribution, neutron polarization, and mode of emission (continuous or pulsed). In early neutron sources, the neutrons were produced by using the nuclear reactions (α,n) in 9Be or 10B nuclei and the photodisintegration of a deuteron or a Be nucleus, that is, the reaction (γ,n). In the first case, the neutron source is a homogeneous mechanical mixture of powders of 9Be and a radioactive isotope that emits alpha particles sealed in an ampul; the radioactive isotopes used include radium, polonium, and plutonium. The ratio of Be to, for example, Ra is 1:5 (by weight). The intensity of the source is determined by the permissible amount of alpha-active preparation. The activity is usually 10 curies or less, corresponding to the emission of approximately 107–108 neutrons per second (see Table 1). Neutron sources with a Ra + Be or Am + Be mixture are also sources of intense gamma radiation (104–105 gamma quanta per neutron). Neutron sources using Po + Be or Pu + Be mixtures emit just one gamma quantum per neutron.

In the case of an ampul photoneutron source, the ampul contains a hollow cylinder or sphere made of Be or containing heavy water (D2O) and enclosing a gamma-radiation source. The energy of the gamma quanta must be greater than the threshold energy for photodisintegration of D or Be nuclei. A shortcoming of this source is the presence of intense gamma radiation; such a source is used when monoenergetic neutrons must be produced by simple means. The spontaneous fission of heavy nuclei is also used in ampul neutron sources.

Since the appearance of charged-particle accelerators, the (p,n) and (d,n) reactions in light nuclei and (d,pn) reactions have been used to produce neutrons. In special accelerator tubes, protons and deuterons are accelerated in an electric field generated by a voltage of approximately 105—107 V. Such neutron generators differ in size and other features. Some occupy an area of 50–100 m2 and have an intensity of approximately 1012-1013 neutrons/sec (the energy can be varied from 105 to 107 electron volts [eV]). For neutron logging there are also miniature accelerator tubes with diameters of approximately 25–30 mm that emit 107–108 neutrons per second.

To produce neutrons with energies of from 2 to 15 MeV, the reactions D (d,n)3He and T (d,n)4He are used most widely. The target is a metal hydride (usually the metal is Zr or Ti) containing deuterium or tritium instead of ordinary hydrogen. A significant neutron yield is observed in the D + d reaction when the deuteron energy reaches approximately 50 keV. At this value, the neutron energy is approximately 2 MeV and increases with increasing proton energy. For neutrons with an energy of from 13 to 20 MeV, the T + d reaction, which results in a larger neutron yield, is preferable. For example, when the deuteron energy is 200 keV, neutrons having an energy of approximately 14 MeV emerge from a thick tritium-zirconium target at a rate of 108 per second per microcoulomb of deuterons.

The (p,n) reaction in 7Li and other nuclei is convenient for producing monoenergetic neutrons over a broad range of energies. It usually is used in electrostatic generators. The (p,n) and (d,pn) reactions in beams of high-energy protons and deuterons are used to produce neutrons of higher energies (approximately 108 eV). The (p,n) reaction is brought about by the direct expulsion of a neutron from the nucleus (without any intermediate stage of excitation of the nucleus) and also by charge transfer in an emerging nucleon in the field of the nucleus. In this case, the neutrons emerge principally in the direction of the proton beam and are monochromatic for a fixed exit angle. The (d,pn) reaction (the disintegration of a deuteron in the field of a nucleus) leads to the production of a neutron with an energy equal to one half of the energy of the deuteron.

Electron accelerators are also used as neutron sources. Intense beams of fast electrons are directed onto thick targets made of heavy elements, such as lead or uranium. The resulting bremsstrahlung gamma quanta induce either the (γ,n) reaction or nuclear fission accompanied by the emission of neutrons. All neutron generators can operate in both continuous and pulse modes.

The most powerful neutron sources are nuclear reactors. A neutron beam extracted from a reactor contains neutrons with energies ranging from a fraction of an electron volt to 10–12 MeV. In powerful reactors, the neutron flux density at the center of the reactor core reaches 1015 neutrons per second per square centimeter (in the continuous mode of operation). Pulse reactors operating in the short-pulse mode produce a higher neutron flux density; for example, the fast-neutron pulse reactor at the Joint Institute for Nuclear Research has a flux density of 1020 neutrons per second per square centimeter at the center of the core at the time of a pulse. 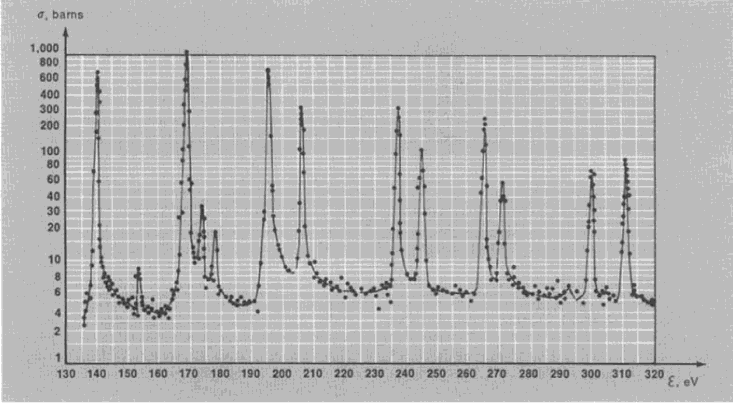 Feedback
Flashcards & Bookmarks ?
Please log in or register to use Flashcards and Bookmarks. You can also log in with
Flashcards ?
My bookmarks ?
+ Add current page to bookmarks
Mentioned in ?
References in periodicals archive ?
Harig [5] published in French experimental results comparing hydrogen and deuterium as the moderator media for a cold neutron source installed in the SILOETTE reactor.
Using CFD as Preventative Maintenance Tool for the Cold Neutron Source Thermosiphon System
The CNF will contain Canada's first cold neutron source and guide hall, opening up new areas of research that require longer wavelengths and finer energy scales than have been accessible previously.
Celebrating Canada's National Facilities
When it becomes operational in early 2005, the new cold source at the High Flux Isotope Reactor (HFIR) will be the most intense cold neutron source in the United States.
Measurement of neutron decay parameters--the abBA experiment
The cold neutron source in the core of the CNF reactor will boost the flux of lower-energy, longer-wavelength neutrons to more than ten times the level that can be achieved at the NRU reactor, which does not include a cold source.
The Canadian Neutron Facility
The precision can be reduced below 1% either by additional runs at NIST or by moving the experiment to a higher flux cold neutron source such as the Spallation Neutron Source at Oak Ridge (under construction) or the ILL reactor in Grenoble, France.
Proposed measurement of the beta-neutrino correlation in neutron decay
This proposed facility will replace the NRU reactor and will incorporate a cold neutron source.
The Canadian Neutron Facility
The Low Energy Neutron Source (LENS), currently under construction at the Indiana University Cyclotron Facility (IUCF), will be the world's first university-based pulsed cold neutron source when it becomes operational in the spring of 2005.
LENS: a new pulsed neutron source for research and education
The NPDGamma experiment [6] is the first of a new program of fundamental electroweak symmetry experiments to be run at the Lujan Center spallation neutron source at LANSCE, which currently provides the highest intensity pulsed cold neutron source in the world for fundamental neutron physics.
Measurement of parity violation in np capture: the NPDGamma experiment
In 1985 and 1987 NBS was successful in budget initiatives first to develop a large cold neutron source and then to build a cold neutron guide hail and guide tube network along with 15 new instruments that provided the United States for the first time with world-class capabilities in cold-neutron research on materials.
Materials research with neutrons at NIST
"ORNL will be unique in the world having both high-intensity pulsed and continuous cold neutron sources," explains Steve Nagler, interim director of ORNL's Center for Neutron Scattering.
Cooling neutrons for research
The parity-violating rotation of the transverse neutron polarization vector about the momentum axis as the neutrons traverse a target material has been measured in heavy nuclei and few nucleon systems using reactor cold neutron sources. We describe here an experiment to measure the neutron spin-rotation in a parahydrogen target (n-p system) using pulsed cold-neutrons from the fundamental symmetries beam line at the Spallation Neutron Source under construction at the Oak Ridge National Laboratory.
Parity-violating neutron spin rotation in a liquid parahydrogen target
Time-of-flight instruments on cold neutron sources can produce data that have a high intensity and good resolution at high d-spacings.
Multidataset refinement resonant diffraction, and magnetic structures