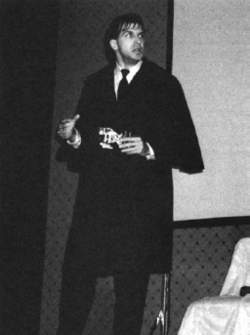 Jeff Thompson, cofounder of the Collinsport Players, on stage in a production of The More Things Change. 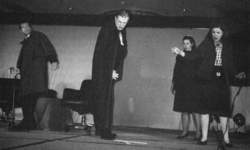 The Collinsport Players is a fan-led Dark Shadows dramatic group founded at the Dark Shadows Festival in Newark, New Jersey, in 1984 by Jeff Thompson and Dr. Laura Brodian, hosts of the festival. Both were already in costume and decided to enliven their hosting chores with a set of improvisational sketches. The positive reaction of the audience led to a formalizing of their activities as the Collinsport Players (named for the town in which the Collins family resided in the television show). Improvisation dominated the 1985 performance of a skit entitled Julia’s Trump. From that point, scripts were written and the cast size increased. Spelling Bee, presented in 1985, involved five actors. In 1986, the twentieth anniversary of the premiere of Dark Shadows, the group performed The More Things Change: The Official Twentieth Anniversary Skit, a major step forward into a full one-act play with some two dozen actors participating.

The Collinsport Players has regularly performed at every annual national Dark Shadows Festival since its initial performance in 1984. It draws its cast from fans around the country. The new scripts each year are sent to the players six weeks ahead of time. They memorize their parts and gather upon their arrival at the festival site for two rehearsals before their performances. The plays have been comedies full of inside jokes. Many have spoofed actual episodes of the television series while others have moved in more speculative directions, taking the characters into hypothesized situations. Among the Collinsport Players’ most successful comedies, complete with costumes, sound effects, and music, have been Quiet on the Set, The Times They Change, The Loco-Motion, Double Play, and A Julia Carol. In 1993 the first of two volumes of the Players’ skits was published by HarmonyRoad Press. Connie Jonas, the press’ founder, is a member of the group.

Jeff Thompson, co-founder of the Players and its current producer-director, has been a Dark Shadows fan for many years, and has written widely for several of the fanzines. He wrote most of the plays for the Players, one fan-press book on The Dark Shadows Comic Books, and in 1990 completed his master’s degree program with a thesis on the historical novels of Daniel Ross, who wrote 33 Dark Shadows novels under the pseudonym Marilyn Ross. Thompson completed his thesis at Tennessee State University, where he teaches English.

The Collinsport Players were among the performers at Dracula ‘97: A Centennial Celebration in Los Angeles. They performed their twenty-fifth annual performance at the Dark Shadows convention held in Elizabeth, New Jersey in 2009.