Atomic and electronic defects of various types which produce optical absorption bands in otherwise transparent crystals such as the alkali halides, alkaline earth fluorides, or metal oxides. They are general phenomena found in a wide range of materials. Color centers are produced by gamma radiation or x-radiation, by addition of impurities or excess constituents, and sometimes through electrolysis. A well-known example is that of the F-center in alkali halides such as sodium chloride, NaCl. The designation F-center comes from the German word Farbe, which means color. F-centers in NaCl produce a band of optical absorption toward the blue end of the visible spectrum; thus the colored crystal appears yellow under transmitted light. On the other hand, KCl with F-centers appears magenta, and KBr appears blue. See Crystal

Color centers have been under investigation for many years. Theoretical studies guided by detailed experimental work have yielded a deep understanding of specific centers. The crystals in which color centers appear tend to be transparent to light and to microwaves. Consequently, experiments which can be carried out include optical spectroscopy, luminescence and Raman scattering, magnetic circular dichroism, magnetic resonance, and electromodulation. Color centers find practical application in radiation dosimeters; schemes have been proposed to use color centers in high-density memory devices; and tunable lasers have been made from crystals containing color centers.

The illustration shows the absorption bands due to color centers produced in potassium bromide by exposure of the crystal at the temperature of liquid nitrogen (81 K) to intense penetrating x-rays. Several prominent bands appear as a result of the irradiation. The F-band appears at 600 nanometers and the so-called V-bands appear in the ultraviolet. 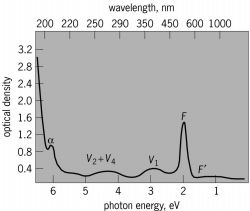 Color bands such as the F-band and the V-band arise because of light absorption at defects dispersed throughout the lattice. This absorption is caused by electronic transitions at the centers. On the other hand, colloidal particles, each consisting of many atoms, dispersed through an optical medium also produce color bands. In this case, if the particles are large enough, the extinction of light is due to both light scattering and light absorption. Colloidal gold is responsible for the color of some types of ruby glass. Colloids may also form in alkali halide crystals—for example, during heat treatment of an additively colored crystal with an excess of alkali metal.

Atomically dispersed centers such as F-centers are part of the general phenomena of trapped electrons and holes in solids. The accepted model of the F-center is an electron trapped at a negative ion vacancy. Many other combinations of electrons, holes, and clusters of lattice vacancies have been used to explain the various absorption bands in ionic crystals.

Impurities can play an important role in color-center phenomena. Certain impurities in ionic crystals produce color bands characteristic of the foreign ion. For example, hydrogen can be incorporated into the alkali halides with resultant appearance of an absorption band (the U-band) in the ultraviolet. In this case, the U-centers interact with other defects. The rate at which F-centers are produced by x-irradiation is greatly increased by the incorporation of hydrogen, the U-centers being converted into F-centers with high efficiency.

Feedback
Flashcards & Bookmarks ?
Please log in or register to use Flashcards and Bookmarks. You can also log in with
Flashcards ?
My bookmarks ?
+ Add current page to bookmarks
Mentioned in ?
References in periodicals archive ?
Experiments conducted under conditions mimicking Europa's surface later showed that the "color centers" may be caused by irradiated NaCl.
Jupiter Moon Europa Shares Shocking Similarity With Earth, Study Says
The accumulation of theses defects leads to the formation of characteristic color centers such as boron E center, non-bridging hole center, TM defect center etc.
Characterization of Some Chemical and Physical Properties of Lithium Borate Glasses Doped With CuO and/or TeO2
These, much like chromium, contribute to the crystal field theory of metal color centers and paint a very informative picture of glaze color mechanism.
The Science of Ceramic Glaze Color
Changes in color after irradiation have been attributed to the formation of annealable or permanent color centers [12].
Discoloration Effects of High-Dose [gamma]-Irradiation and Long-Term Thermal Aging of (U)HMW-PE
The cosmetic debate over rifle color centers around opinion, but the fact remains that lighter colored rifles don't get as hot when left in the sun.
Embracing direct impingement
Sun Chemical is reinforcing its commitment to customers in Latin America with the opening of six color centers. Located in San Salvador, El Salvador; Mexico City, Mexico; Cali, Colombia; Lima, Peru; Sao Paulo, Brazil and Santiago, Chile, the color centers will build the foundation for customers in the region to implement a digitally color-managed workflow.
Sun Chemical opening six color centers in Latin America
Sun Chemical announced the opening of six color centers in Latin America.
Sun Chemical opening six color centers in Latin America
The applications fall into three broad types: generating scalable quantum registers for quantum information-processing protocols, generating single-photon emitters using color centers as a light source, and diamond defects for novel imaging and sensing technologies.
Quantum Information Processing With Diamond: Principles and Applications
These changes to the color centers were comprehensive, according to Shukla, touching on everything from upgrading the look and feel of the centers' design to the reformulation of colorants and retrofitting of dispensing equipment.
Doing things better, faster and more cost effectively
Nowadays, the point defects or color centers are relevant in understanding the emissive properties of materials that have a variety of applications in our high technology lifestyle.
Emission mechanisms of Si nanocrystals and defects in Si[O.sub.2] materials
The above studies were focused on the effect of gamma-ray irradiation on the optical, mechanical, chemical, and electric properties of PC, but the evolution of color centers in PC was not reported.
Annihilation kinetics of color center in polycarbonate irradiated with gamma ray at elevated temperatures