Since ancient times people have searched the heavens for information on the present andfuture. The primary product of such searching has been astrology and its cataloging of the regular movements of stars and planets. However, speculation has also flowed around less regular events—meteors, eclipses, and comets. Because they occurred less often and were spectacular displays when they did, they were seen as particularly important as signs of blessing and woe. Meteors were generally thought to presage happy events, as were stellar events such as super novas. There was some foreboding over eclipses and even dread with a brilliant comet.

Throughout the early years of Christendom, comets were seen as indicative of catastrophes, even the downfall of empires, a belief that gained the approbation of a number of leading thinkers throughout the centuries. Illustrative of this belief is one folktale that Pope Calixtus III (r. 1455–1458) excommunicated a comet as an instrument of the devil. He was possibly aware of the coincidental 1066 appearance of Halley’s Comet with the Battle of Hastings, in which William the Conqueror seized the British throne from King Harold. The comet was said to portend war and the death of kings. As late as 1836, Halley’s Comet was blamed for the deaths at the Alamo.

By the twentieth century, the science of astronomy began to assert itself. Although discovery of the poisonous nature of the gases in the tails of comets initially increased paranoia, astronomers eventually succeeded in reducing comets to the mundane in the eyes of most people. The public education was not altogether successful, however. In the late twentieth century, religious connotations associated with comets began to take shape with the appearance of Comet Kohoutek in 1973 (a comet notable as the first in several decades that would be seen by a majority of humankind). The comet proved less than spectacular, and the predictions that had been made about changes to the Earth did not come to pass.

In the spring of 1997, while most people were enjoying the show that Comet Hale-Bopp was putting on, a small group in Rancho Santa Fe, California, was watching it for quite different reasons. The Heaven’s Gate group celebrated what was to be the occasion of transcending their human existence. When catastrophe did not overtake the Earth, in March of that year, thirty-nine members committed suicide.

Religious and apocalyptic speculation concerning comets has continued to the present, although it has been pushed to the fringe of popular culture. 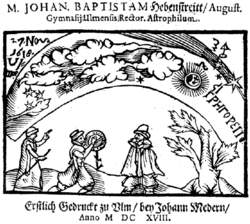 A detail of the title page from a publication dealing with a comet from 1618. Reproduced by permission of Fortean Picture Library.

A comet (from the Greek word kometes, meaning “longhaired”) is a celestial body composed of ice, rock, and frozen gases that has been quaintly described as a dirty snowball. Almost all comets observed from Earth are part of our solar system, following long elliptical orbits that bring them from outside the orbit of Pluto, close to the Sun, and then back beyond Pluto. Many become involved with gravitational forces in the planetary system, so that they subsequently follow paths that keep them considerably inside Pluto’s orbit—some even become trapped inside Jupiter’s orbit. The so-called tail of a comet is produced when the comet passes close enough to the Sun for sunlight to heat it up, causing gas and dust particles to escape from the nucleus and form a glowing tail.

As extraordinary heavenly phenomena that did not appear to follow the same regular patterns as the stars or the planets, comets were traditionally regarded as signs of unusually important events. In Western countries in particular, they were regarded as omens of disaster—such as plagues, famines, and war. In China, they were also traditionally regarded as omens—either good or evil. To modern people who rarely look at the night sky—much less ever having seen a comet—this explanation appears unreasonable. To understand ancients’ response to comets, one must empathize with them and understand that they saw celestial events as messages from the gods. Furthermore, our generation has not had the opportunity to view any truly spectacular comets—fiery visitors that in times past lit up the night sky with a spectacle of brilliance exceeding the glow of a full Moon. With these considerations in mind, it is easier to understand the response of the French surgeon Ambroise Paré to a comet that appeared over Europe in 1528: “It appeared to be of great length and the color of blood. At its summit was visible the figure of a bent arm, holding in its hand a great sword as if ready to strike. On either side of the tail were seen a great number of axes, knives, and bloodstained swords, among which were hideous human faces with beards and bristling hair.” The comet was horrible and produced such great terror among the common people that many died of fear and many others fell sick, as noted in David Ritchie’s book Comets: The Swords of Heaven.

Many meteors are constituted from the residue of comets. This residual matter is drawn into Earth’s gravitational field, burns up as it passes through the atmosphere, and occasionally creates a visible flash that we call a falling or shooting star. Less frequently, enough mass is left after the journey through the atmosphere for a meteor to actually strike the surface of Earth. In this situation, the meteor becomes a meteorite.

Despite the importance that earlier generations of astrologers attributed to comets, modern astrologers have tended to ignore them. However, ephemeredes of such well-known comets as Halley’s exist, so it is possible to place at least these in horoscopes and study their influence. It is also relevant to note that Chiron—a large planetoid orbiting between Saturn and Uranus that has been given an extraordinary amount of attention by contemporary astrologers—is a comet. It is thus entirely possible that comet studies will find a place in modern astrology in the not-too-distant future.

Feedback
Flashcards & Bookmarks ?
Please log in or register to use Flashcards and Bookmarks. You can also log in with
Flashcards ?
My bookmarks ?
+ Add current page to bookmarks
Mentioned in ?
References in periodicals archive ?
Here's everything you need to know about the comet, including what it is and when you can see it.
NASA announces a huge comet will arrive this week - and this is how you can see it; Dubbed 168P-Hergenrother, the blazing comet will be visible with the naked eye in some parts of the UK
Occasionally the orbits of comets travelling in the same plane as the planets may be perturbed by the gravitational effects of the major planets, mainly Jupiter, into elliptical orbits.
Comets
The G tells us that the comet was discovered in the first half of April (January = A+B; February = C+D; March = E+F; April = G+H; and so on).
What's in a Name?
After a 10-year journey, it caught up with a comet in the far reaches of the solar system and dropped a lander the size of a washing machine on the comet's surface.
Mission to a comet: scientist chase down a space rock to learn how our solar system formed
Unlike asteroids, comets appear to be shaped by vaporized ice and occasional gas eruptions, which can remove material entirely or just drop it somewhere else on the surface.
Rosetta reveals a complicated comet: simple 'ice-and-dust' model dashed by images of diverse terrain
The comet, C/2012 S1 (ISON), is highly unusual in that it comes to the inner solar system for the first time and will skirt around the Sun within less than two solar radii from the Sun's surface on Nov.
Hubble photographs newly discovered comet on way to inner solar system
In fact, comets often have two tails, which can point in quite different directions.
Stargazing; Welcome to the tail of two comets
The recently discovered object, known as comet ISON, is due to fly within 1.2 mln miles (1.9 mln km) from the center of the sun on November 28, 2013 said astronomer Donald Yeomans, head of NASA's Near Earth Object Program at the Jet Propulsion Laboratory in Pasadena, Calif.
Comet ISON could outshine moon... if it survives
As with a gift you never expected to get for Christmas, so surprised were southern hemisphere observers around 21-28 December 2012 when a bright naked-eye comet, sporting a tail some 30 degrees long, graced the morning skies in a brief, but excellent performance.
Comet lovejoy, the great Christmas comet of 2011
Comet C/2010 X1 (Elenin) is, or rather was, a long period comet (pre-1996 classification) discovered by Russian amateur astronomer Leonin Elenin on 2010 December 10 using the International Scientific Optical Network's robotic telescope located in New Mexico, USA.
Dust to dust--comet C/2010 X1 (Elenin)
A comet called 73P/Schwassmann-Wachmann 3 has been disintegrating for years, but the pace has picked up in recent weeks.
The way a comet crumbles