[kə′mand ‚gīd·əns]
(aerospace engineering)
The guidance of a missile, rocket, or spacecraft by means of electronic signals sent to receiving devices in the vehicle.
(engineering)
A type of electronic guidance of guided missiles or other guided aircraft wherein signals or pulses sent out by an operator cause the guided object to fly a directed path. Also known as command control. 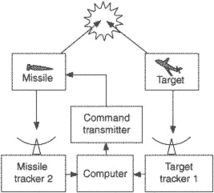 Command guidance system.
A system of guidance in which the missile is given guidance signals from a source other than from within the missile itself. Normally, two radars are used—one to track the missile and the other the target. The commands may be sent automatically or through human operators.