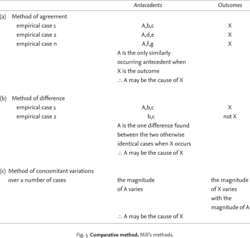 Feedback
Flashcards & Bookmarks ?
Please log in or register to use Flashcards and Bookmarks. You can also log in with
Flashcards ?
My bookmarks ?
+ Add current page to bookmarks
Mentioned in ?
References in periodicals archive ?
Comparative Historical Analysis in the Social Sciences.
From Mid-Level Policy Analysis to Macro-Level Political Economy: Comment on "Developing a Framework for a Program Theory-Based Approach to Evaluating Policy Processes and Outcomes: Health in All Policies in South Australia"
The methodological stream (and theoretical underpinnings) of comparative historical research therefore lead to the more systematic pinpointing of necessary and sufficient causes in international business case research.
Historical research approaches to the analysis of internationalisation
In a chapter on States, Lachmann draws on Mann (1993) to suggest a clear plan for comparative historical sociological research on social benefits.
Richard Lachmann, What is Historical Sociology?
College Dublin, Ireland) offers a "comparative historical and sociological analysis of the processes involved in the emergence, formation, expansion and transformation of nation-states and nationalisms.
Nation-states and nationalisms; organization, ideology and solidarity
Using a comparative historical approach, he studies the growth trajectories and development outcomes of Malaysia and Thailand, and secondarily, those of the Philippines and Vietnam, and concludes that the key factor--his 'prescriptive claim'--in successful pro-poor social reforms is the institutionalised political party that, effectively interventionist in power, is itself governed by pragmatic ideology and moderate policies.
The institutional imperative: The politics of equitable development in Southeast Asia
The fourth and final chapter deals with the sumptuary legislation with a comparative historical approach: Zanda presents very briefly the sumptuary laws enacted in England, Italy, and Japan between the twelfth and eighteenth centuries in order to give a better answer to the questions concerning the aims of the ruling class in creating such laws, as well as their motivations and related ideological discourse.
Fighting Hydra-like Luxury: Sumptuary Regulation in the Roman Republic
More importantly, it is a theoretically innovative work that pushes the boundaries of comparative historical and political institutionalism and contributes significantly to theory development, particularly in linking the agency and discourse of political and social actors to the structures of political institutions and policy legacies.
Crossnational abortion policy
Field, Santa Clara University, "The Interwar Housing Cycle in the Light of 2001-2011: A Comparative Historical Approach"
Universities-Research Conference on Housing and Mortgage Markets in Historical Perspective