compass. 1 In mathematics, an instrument for making circles and measuring distances. Frequently called a pair of compasses, it consists of two metal legs with one end of each attached to a pivot to form a V-shaped device. The free ends are pointed; a pen or pencil may be substituted for one of the points. 2 In navigation, an instrument for determining direction. The mariner's compass consists of a magnetic needle freely suspended so that in the earth's magnetic field it turns until aligned with the magnetic north and south poles. Declination is the angle between the magnetic needle and the geographical meridian. Use of the compass by the early Chinese is probably legendary. The first known reference in European literature dates from the 12th cent. Another more accurate form of navigational compass is the gyrocompass. It consists essentially of a rapidly spinning, electrically driven rotor, suspended in such a way that its axis automatically points along the geographical meridian. The gyrocompass is unaffected by magnetic influences. This compass came into wide use in warships and aircraft during the Second World War. See gyroscope.
The Columbia Electronic Encyclopedia™ Copyright © 2022, Columbia University Press. Licensed from Columbia University Press. All rights reserved.
The following article is from The Great Soviet Encyclopedia (1979). It might be outdated or ideologically biased. 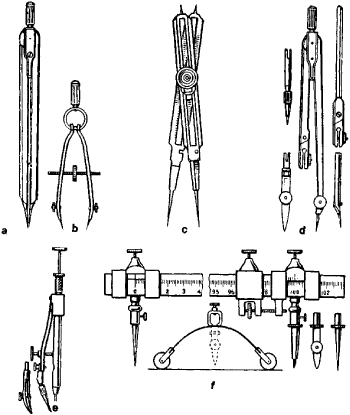 [′käm·pəs]
(engineering)
An instrument for indicating a horizontal reference direction relative to the earth.
(graphic arts)
An instrument used for describing arcs or circles with pencil or pen; has two legs hinged together at the top.
McGraw-Hill Dictionary of Scientific & Technical Terms, 6E, Copyright © 2003 by The McGraw-Hill Companies, Inc. compass
An instrument for drawing circles, measuring the distance between two points, etc.; consists of two pointed legs, movable on a joint or pivot, usually made so that one of the points can be detached for the insertion of a pen, extension, etc.
McGraw-Hill Dictionary of Architecture and Construction. Copyright © 2003 by McGraw-Hill Companies, Inc.

1. an instrument used for drawing circles, measuring distances, etc., that consists of two arms, joined at one end, one arm of which serves as a pivot or stationary reference point, while the other is extended or describes a circle
2. Music the interval between the lowest and highest note attainable by a voice or musical instrument
Collins Discovery Encyclopedia, 1st edition © HarperCollins Publishers 2005

The assembly language on CDC computers.
This article is provided by FOLDOC - Free Online Dictionary of Computing (foldoc.org)