A class of high-molecular-weight carbohydrates, colloidal complexes, which break down on hydrolysis to monosaccharides containing five or six carbon atoms. The polysaccharides are considered to be polymers in which monosaccharides have been glycosidically joined with the elimination of water. A polysaccharide consisting of hexose mono-saccharide units may be represented by the reaction below.

a macromolecular compound of the carbohydrate class, composed of monosaccharide residues (M) joined by glycoside bonds. The molecular weight of polysaccharides ranges from several thousand for laminarin and inulin to several million for hyaluronic acid and glycogen; it can be determined only approximately, since individual polysaccharides are usually mixtures of components that differ in degree of polymerization. The chemical classification of polysaccharides is based on the structure of their monosaccharide components, hexoses (glucose, galactose, and mannose) and pentoses (arabinose and xylose), as well as amino sugars (glucosamine and galactosa-mine), deoxy sugars (rhamnose and fucose), and uronic acids.

Polysaccharides, unlike other classes of biopolymers, can exist in both a linear structural form (Figure 1,a) and branched forms (Figure 1,b and c). 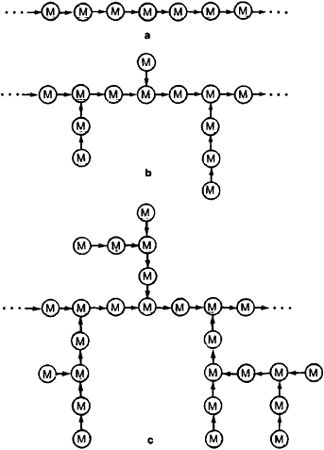 Examples of linear polysaccharides are cellulose, amylose, and mucopolysaccharides; yeast mannans and vegetable gums have structure (b), and glycogen, amylopectin, and galactan from the edible snail Helix pomatia have structure (c). The structural type of a polysaccharide largely determines its physicochemical properties, particularly solubility in water. Regular linear polysaccharides (that is, those containing only one type of inter-monosaccharide bond), such as cellulose and chitin, are insoluble in water, since the energy of molecular interaction is greater than the hydration energy. Highly branched polysaccharides that do not have an ordered structure are readily soluble in water. The chemical reactions characteristic of many monosaccharides—for example, acylation, alkylation, oxidation of hy-droxyl groups, reduction of carboxyl groups, and the introduction of new groups—are also effected in polysaccharides, although the rates of these reactions are usually lower. Chemically modified polysaccharides often exhibit new properties of practical importance that are absent in the original compound.

In living organisms, polysaccharides—which are the main energy reserves—are split by intracellular and extracellular enzymes to yield monosaccharides and their derivatives, which decompose further to liberate energy. The accumulation and decomposition of glycogen in the liver of humans and higher animals is a means of controlling the glycogen level in the blood. Monomeric products are formed indirectly by the successive splitting off of polysaccharides from the molecule or as a result of the step-by-step decomposition of polysaccharides, with the intermediate formation of oligosaccharides. Many polysaccharides, including starch, cellulose, and pectins, are used in the food and chemical industries, as well as in medicine.

Feedback
Flashcards & Bookmarks ?
Please log in or register to use Flashcards and Bookmarks. You can also log in with
Flashcards ?
My bookmarks ?
+ Add current page to bookmarks
Mentioned in ?
References in periodicals archive ?
The search for structure could help put to rest a long-running debate in the scientific community as to whether complex carbohydrate biopolymers require a defined structure to function.
Scientists Sequence First Carbohydrate Biopolymer
Complex carbohydrates, such as multi-grain toast, porridge or granola, slowly release energy and give a prolonged boost to your blood sugar levels, preventing snacking and hunger.
Some food for thought
Only Group B achieved the goal of reducing sugar intake, and only Group A achieved the goal of increasing complex carbohydrates.
Families lose weight with fat, sugar, carbs intake counseling
Like genes and proteins, complex carbohydrates may be altered as cancer develops.
Carbohydrates may be used as a new cancer biomarker
Ideally, you would eat complex carbohydrates, such as vegetables and whole grains that break down slowly, releasing glucose into your bloodstream over a period of time, and providing your body with a steady generation of energy rather than a burst.
Energy or candy? The bar facts
Coverage includes the isolation, purification, and structural characterization of carbohydrates; the study of glycosylation in living cells; the exploitation of the "glycosylation machinery" for the production of complex carbohydrates in living cells; cell-free enzymatic methods for carbohydrate synthesis; chemical synthetic methods; industrial and biotechnological applications; applications in biomedicine and human health; and the types of carbohydrates--polysaccharides, oligosaccharides, and monosaccharides.
Handbook of carbohydrate engineering
-ALTU fruit bars contain at least 20 per cent fruit, are full of complex carbohydrates (the ones that give you energy for longer) and lots of grains, rice and oats.
DIET & SLIMMING: NEWS bites
The GI rules include: Eat three meals a day, never skipping breakfast, and three snacks Eat lots of fruit and vegetables every day Drink plenty of water Eat 100 per cent stone-ground wholemeal bread and brown rice, complex carbohydrates which release their energy slowly Snacks These can include, an apple, orange, peach or pear; low fat sugar free yoghurt; 100g (4oz) low fat cottage cheese with one tablespoon sugar-free jam.
Be a Gi Jane
By replacing processed and additive-packed products with those rich in nutrients and complex carbohydrates - so-called 'happy foods', you will feel full of stamina all day long and your mood will improve too.
Beauty : Eat yourself happy; Laura Davis discovers how the right foods can keep you smiling and alert
Its formula, which is wheat and dairy free and high in fiber, protein, antioxidants, omega-3 fatty acids and complex carbohydrates, might leave the impression that it must be a little too healthy to taste good.
Not grandma's granola
Harvard researchers have found that consuming too much fructose--mainly as high fructose corn syrup from soft drinks and fruit punch--and eating too little complex carbohydrates and high-fiber foods like cereal, result in increased blood levels of C-peptide, a hormone that mirrors insulin levels and is linked to the development of type 2 diabetes.
Type of carbs in your diet may affect diabetes risk
These include simple sugars, like sucrose ([C.sub.6][H.sub.12][O.sub.6]), as well as the more complex carbohydrates. These compounds, which form an essential link in the chemical chain reactions of life, are created by autotrophic organisms--plants--that gather carbon and energy from the environment, carbon from carbon dioxide, and energy from sunlight.
A greener future: science has demonstrated that plant life and food production will benefit substantially from higher concentrations of carbon dioxide in the atmosphere