a thermal steam-turbine power plant whose purpose is the generation of electric power by condensing turbines.

A condensation electric power plant uses organic fuels (solid fuels, mainly pulverized coal of various types, as well as mazut). The heat released by combustion of the fuel is transmitted to a working substance, usually steam, in a boiler unit (steam generator). Plants operating on nuclear fuels are called atomic power plants or condensation atomic power plants. In a condensing turbine the thermal energy of steam is converted into mechanical power, which is converted into electric power by a generator. The back-pressure steam leaving the turbine is condensed, and the condensate is pumped into a boiler (boiler unit or steam generator), first by a condensate pump and then by a feed-water pump. Thus, a closed steam-water loop exists: from the steam boiler and superheater through the pipeline from the boiler to the turbine and then to the condenser, the condensate and feed-water pumps, and the feed-water pipeline back to the steam boiler. This sequence of the steam-water loop is the main technological scheme in steam-turbine power plants and is called the heat-balance diagram of the power plant (see Figure 1). condensation of the back-pressure steam requires a large quantity of cooling water at a temperature of 10°-20°C (about 10 m3/sec for turbines with a power output of 300 megawatts [MW]). condensation power plants are the primary source of electric power in the USSR and most other industrial countries. They account for two-thirds of the total power of all thermal electric power plants in the USSR. Plants operating as a part of the power systems in the Soviet Union are also called state regional electric power plants. 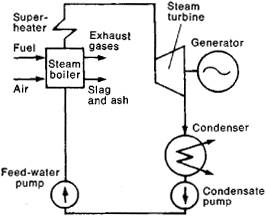 The main industrial economic demands made of condensation electric power plants are high reliability, flexibility, and efficiency. High reliability and flexibility are required because the power produced is consumed immediately: a plant must produce the exact amount of power required by consumers at any given moment.

The economy of construction and operation of a condensation electric power plant is determined by the specific capital investment (110–150 rubles per rated kilowatt), the prime cost of electric power (0.2–0.7 kopek per kilowatt-hour), and a composite index, the specific computed expense (0.5–1.0 kopek per kilowatt-hour). These indexes depend on the rated power of the plant and its units, on the type and cost of fuel, on the operating conditions, and on the efficiency of energy conversion process, as well as on the location of the plant. Fuel costs usually account for more than one-half of the cost of production of electric power. Therefore, a condensation electric power plant must satisfy specific requirements for thermal economy (low specific consumption of heat and fuel and high operating efficiency).

Energy conversion in a condensation electric power plant is based on the Rankine cycle, in which the addition of heat to water and steam in the boiler and the elimination of heat by cooling water in the turbine condenser take place at constant pressure, and the work performed by the steam in the turbine and the increase of water pressure in the pumps take place at constant entropy.

An increase in the efficiency of a condensation electric power plant may be achieved mainly by increasing the initial parameters of the steam (initial pressure and temperature) and by im-proving the thermodynamic cycle, specifically by using intermediate superheating of steam and regenerative heating of the condensate and feed water by steam bled from the turbine. Based on considerations of industrial economics, the initial steam pressure in a condensation plant may be subcritical (13–14 or 16–17 meganewtons per sq m [MN/m2]) or supercritical (24—25 MN/m2); the initial temperature of the live steam (and after intermediate superheating) is 540°-570°C. In the USSR and abroad experimental industrial installations have been built for initial steam parameters of 30–35 MN/m2 at 600°-650° C. Intermediate superheating is usually a single-stage process, but some foreign power plants operating at supercritical pressures use a two-stage process. The number of regenerative steam bleedings is seven to nine, and the final temperature of feed-water heating is 260°-300° C. The final pressure of back-pressure steam in the turbine condenser is 0.003–0.005 MN/m2.

A part of the electric power generated is consumed by the auxiliary equipment of the plant (pumps, fans, coal pulverizers, and so on). Power consumption for the plant’s own needs may be as high as 7 percent in a plant operating on coal dust and up to 5 percent for a plant operating on gas or mazut. A substantial fraction of this power, about one-half, is used to drive the feed-water pumps. Large power plants use steam turbines for such drives, thus reducing the amount of electric power consumed for their own needs. A distinction is made between gross efficiency (without taking into account the power consumed by the plant itself) and net efficiency (taking such consumption into account). Other indexes are also used in power engineering that are equivalent to efficiency, such as specific consumption (per unit of electric power) of heat and of conventional fuel with a heat of combustion of 29.3 megajoules per kg (MJ/kg), or 7,000 kilocalories per kg (kcal/kg). For a condensation electric power plant these indexes are 8.8–10.2 MJ/kW-hr (2,100–2,450 kcal/kW-hr) and 300–350 g/kW-hr. Increased efficiency, im-proved fuel economy, and a decrease in the share of fuel consumption in operating expenses usually require more expensive equipment and an increase in capital investment. The choice of equipment to be used in a plant, the steam and water parameters, the flue-gas temperature, and other factors is based on calculations of industrial economics, taking into account both the capital investment and the operational cost (computed expenses).

The main equipment of a condensation electric power plant (boiler and turbine units) is located in the main building (see Figure 2). Boilers and coal-pulverizing equipment (in plants using coal dust) are located in the boiler room; turbine units and their auxiliary equipment are located in the machine room. There is usually one boiler per turbine. A boiler and a turbine unit together with their auxiliary equipment constitute a separate division of the power plant, or single module. Turbines with a power output of 150–1,200 MW require boilers with a steam output of 500–3,600 tons/hr, respectively. Two boilers per turbine, or a double module, were formerly used at state regional electric power plants. A nonmodular, centralized system, in which the steam from the boilers was fed into a common steam header and then distributed among the turbines, was used in the USSR for condensation electric power plants without intermediate superheating of steam and with turbine units rated at 100 MW or less.

The dimensions of the main building are determined primarily by the equipment located in it; they are usually 30–100 m in length and 70–100 m in width for each module, depending on the power rating. The height of the machine room is about 30 m, that of the boiler room 50 m or more. The economy of layout of the main building is estimated according to specific cubic content, which is about 0.7–0.8 m3/kW for plants using coal dust and about 0.6–0.7 m3/kW for plants using gas or mazut. Some of the auxiliary boiler-room equipment is installed in the open, outside 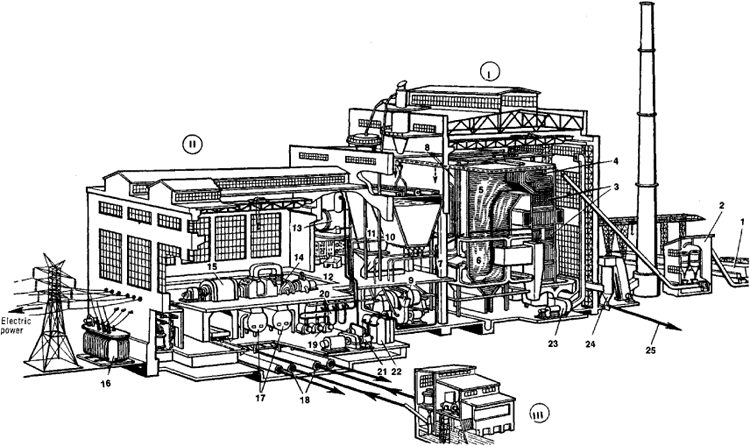 the building (induced-draft, or exhaust, and forced-draft fans, ash-removal systems, cyclone separators for dust removal, and dust separators of the coal-pulverizing system).

An open-air layout for a condensation electric power plant (particularly for those using gas and mazut) is used in warm climates (the Caucasus, Middle Asia, and the southern USA) and in the absence of significant atmospheric precipitation and dust storms. In this case canopies are installed above the boilers, the turbines are protected by light shelters, and the turbine equipment is located in a closed condensation room. With an open-air layout the specific cubic content of the main building is reduced to 0.2–0.3 m3/kW, and the construction costs are reduced. Overhead bridge cranes and other hoisting devices are installed in the power plant’s buildings to facilitate installation and maintenance of power-generating equipment.

condensation electric power plants are built adjacent to sources of water supply (rivers, lakes, or seas); frequently a pond-reservoir is created near the plant. In addition to the main building, structures and equipment for the supply and chemical purification of water and the preparation of fuel, as well as for electrical transformers, distribution equipment, laboratories and shops, storerooms, and service buildings for operating personnel, are also located on the grounds of a condensation electric power plant. Fuel is usually supplied by rail. Ash and slag from the furnace chamber are usually removed by the hydraulic method. Rail lines and roads for motor vehicles are provided on the grounds of the plant; power-line connections are constructed and underground and overhead communications lines are installed. The area occupied by structures of a power plant is 25–70 hectares, depending on the power output and the type of fuel.

In the USSR, personnel requirements for large condensation electric power plants using coal dust are calculated based on one person per 3 MW of power output (about 1,000 persons for a plant with a power output of 3,000 MW); in addition, some maintenance personnel are required.

The power output of a condensation electric power plant is limited by the available water and fuel supply, as well as by the requirements of conservation (the preservation of the normal purity of air and water in the area). In the area adjacent to an operating power plant the release into the air of solid particles entrained by the products of combustion is limited by the installation of advanced ash-removal systems (electrostatic precipitators with an efficiency of about 99 percent). The remaining impurities (sulfur and nitric oxides) are dispersed by providing tall chimneys, which carry harmful impurities to higher atmospheric layers. Chimneys 300 m or more in height are built of reinforced concrete, with three to four metal shafts within a reinforced-concrete enclosure, or within a common metal shell.

The numerous and diverse devices of a condensation electric power plant may be regulated only by integrated automation of the production processes. The condensing turbines now in use are fully automated. In the boiler unit the processes of fuel combustion, water supply to the boiler unit, and maintenance of the superheating temperature of the steam are automatically controlled. Integrated automation of other processes of condensation electric power plants, including maintenance of predeter-mined working conditions, start-up and shutdown of power modules, and protection of equipment under abnormal conditions or during a breakdown, is also being introduced. Electronic computers (digital or, less frequently, analog) are being used for this purpose in control systems in the USSR and abroad.