[kən′fȯr·məl ′map·iŋ]
(mathematics)
An angle-preserving analytic function of a complex variable.
McGraw-Hill Dictionary of Scientific & Technical Terms, 6E, Copyright © 2003 by The McGraw-Hill Companies, Inc.
The following article is from The Great Soviet Encyclopedia (1979). It might be outdated or ideologically biased.

or conformal transformation (in mathematics), a mapping of one figure (region) to another in which any two curves intersecting at a certain angle at an interior point of the first figure are transformed into curves that intersect at the same angle in the second figure. 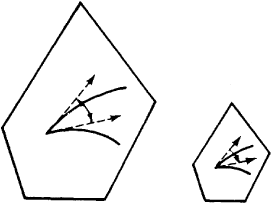 that this conformal mapping is realized with the aid of the function of the complex variable z’ = z2. It is not difficult to ascertain that in this case the half-lines parallel to the sides of the angle are transformed into half-parabolas with a common focus at O’ (Figure 3). It should be noted that angles with the vertex at the point O increase by a factor of two; this does not contradict the definition of a conformal mapping, since O is not an interior point of the region.

In the general case of a conformal mapping, any curvilinear polygon P lying within the region being mapped is transformed into a curvilinear polygon P’ with the same respective angles, but the lengths of the sides may change in a nonproportional manner (Figure 4). However, if the polygon P shrinks to a point A, then its image P’ shrinks to a corresponding point A’ and the ratios of the lengths of the corresponding sides approach the same value:

which depends only on the position of the point A (but not on the polygon being considered); it is called the contraction coefficient at the given point. This fact makes it possible to consider any conformal mapping “locally” (that is, in a sufficiently small neighborhood of each point A) as a similarity transformation followed, in general, by a rotation (see, for example, the quadrilaterals P and P’ in Figure 4). 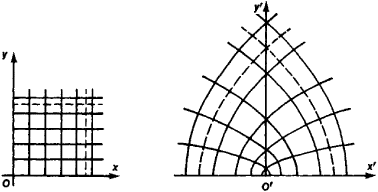 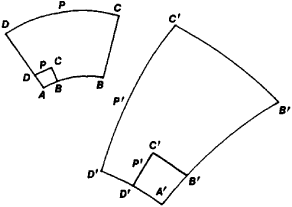 The solution of many important problems can be easily obtained when the problems are posed for sufficiently simple regions (for example, circles or half-planes). If a problem is posed for another, more complex region, then we map conformally a simpler region onto the given one and obtain a solution of the complex problem from a known solution of the relatively simple problem. Thus, for example, the problem of determining the flow of an incompressible homogeneous fluid around a cylinder with a circular cross-section is relatively easy to solve. The lines of flow (that is, the lines along which the velocities of the fluid’s particles are directed) for this case are depicted in Figure 5; flow in the presence of circulation is given here. If the exterior of the circular cross-section of the cylinder is mapped conformally to the exterior of the cross-section of an aircraft wing (the wing profile), then, as can be shown, the flow lines for the case of the circular cylinder are transformed into the flow lines around the wing (Figure 6). Knowledge of the mapping function z’ = f(z) allows us to compute the flow velocity at any point, the lifting force of the aircraft wing, and so forth. N. E. Zhukovskii proceeded along these lines in creating the theory of the aircraft wing.

Not all regions of the plane can be conformally mapped onto one another. Thus, for example, it is impossible to map conformally an annulus bounded by concentric circles of radii R1 and R2, where R1 < R2, onto another annulus bounded by circles of radii r1 and r2 where r1 < r2 if R2/R1 ≠ r2/r1. This makes it all the more remarkable that any two regions, each of which is bounded by only one curve (simply connected regions), can be mapped conformally onto each other (Riemann’s theorem). For example, any polygon can be mapped conformally onto any other polygon, as well as onto a half-plane or circle. Here the angles on the boundary, in general, change, but the definition of conformal mapping does not demand their preservation. As for regions bounded by several curves, such regions can always be mapped conformally onto regions bounded by the same number of mutually parallel line segments (Hilbert’s theorem) or circles (Koebe’s theorem). However, it is impossible to specify arbitrarily the sizes and mutual positions of these segments or circles. 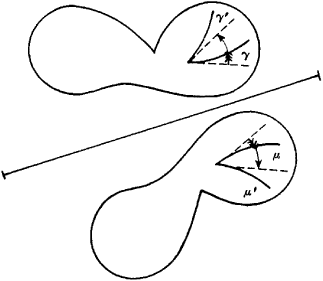 The foundations of the theory of conformal mapping were laid by L. Euler (1777), who established the importance of functions of a complex variable in the problem of the conformal mapping of a portion of a sphere onto a plane (the construction of geographical maps). The study of the general problem of the conformal mapping of one surface onto another led K. Gauss in 1822 to develop the general theory of surfaces. B. Riemann (1851) established the conditions under which it is possible to map one region (of the plane) conformally to another; however, the solution that he had outlined was successfully substantiated only in the early 20th century (in the works of H. Poincaré and C. Caratheodory). The investigations of N. E. Zhukovskii and S. A.. Chaplygin, who discovered a broad field of application for conformal mapping in aeromechanics and hydromechanics, served as a powerful stimulus for the development of the theory of conformal mappings as an important branch of the theory of analytic functions. In this field, the theoretical works of Soviet scientists are of major importance.

Feedback
Flashcards & Bookmarks ?
Please log in or register to use Flashcards and Bookmarks. You can also log in with
Flashcards ?
My bookmarks ?
+ Add current page to bookmarks
Mentioned in ?
References in periodicals archive ?
If f : D [right arrow] f D is a conformal mapping onto a Jordan domain f D, then f has a homeomorphic extension to the closure D (also denoted by f).
CONFORMAL MODULUS AND PLANAR DOMAINS WITH STRONG SINGULARITIES AND CUSPS
A need for conformal mapping arose to mitigate the numerical instabilities, and the conformal mapping functions have been investigated by a number of researchers.
Prediction of Dynamic Stability Using Mapped Chebyshev Pseudospectral Method
Shirokova, "The approximate conformal mapping onto simply and doubly connected domains," Complex Variables and Elliptic Equations.
The Approximate Solution of 2D Dirichlet Problem in Doubly Connected Domains
Conformal mapping appears in complex function theory, which plays important roles for applications in fluid mechanics, image processing, plane elasticity theory, and so on [1, 2].
Improving the Accuracy of the Charge Simulation Method for Numerical Conformal Mapping
Let w = [PHI](z) be the univalent conformal mapping of [OMEGA] onto [DELTA] such that [PHI]([infinity]) = [infinity], [lim.sub.z[right arrow][infinity]] > 0 and for R > 1, we've [L.sub.R] := {z : [absolute value of ([PHI](z))] = R}, [G.sub.R] := int[L.sub.R], [[OMEGA].sub.r] := ext [L.sub.R].
Uniform and pointwise Bernstein-Walsh-type inequalities on a quasidisk in the complex plane
The approximate conformal mapping of the unit disk to the given domain construction method presented here has the following advantages: it does not use any auxiliary constructions (triangulation, circle packing) or additional conformal mappings (zipper algorithm), it does not use accessory solutions of boundary value problems (conjugate function method, Wegmann method), and it even does not use iterations as Wegmann method or Fornberg method where the preimages of the given-on-the-unit circle points move along the given curve [8].
Approximate Conformal Mappings and Elasticity Theory
So for experimentation chosen methods are: pure conformal mapping, pure isometric mapping and angle based flattening, that is closely related to conformal mapping.
An investigation of ABF++, LSCM, and ARAP methods for parametrization of shoetrees/Kurpaliu isklotiniu sudarymo taikant parametrizavimo metodus ABF++, LSCM, ARAP tyrimas
Alternatively, an optical conformal mapping method was used to design a medium that generates invisibility devices in the ray-tracing limit [10].
Transformation Optics and Applications in Microwave Frequencies
The book's 18 chapters begin with topics that might already be familiar to advanced undergraduates such as linear algebra, matrix theory, and differential equations and conclude with discussions of more advanced topics: conformal mapping; Fourier, Hankel and inverse Laplace transforms; and non-linear ordinary differential equations.
Advanced Engineering Mathematics
There are three popular design methodologies: the use of transformation optics, conformal mapping, and scattering cancellation.
Harry Potter's invisibility cloak comes closer to reality