[kän·fər′mā·shən·əl ə′nal·ə·səs]
(physical chemistry)
The determination of the arrangement in space of the constituent atoms of a molecule that may rotate about a single bond.
McGraw-Hill Dictionary of Scientific & Technical Terms, 6E, Copyright © 2003 by The McGraw-Hill Companies, Inc.
The following article is from The Great Soviet Encyclopedia (1979). It might be outdated or ideologically biased.

a branch of stereochemistry that studies the conformations of molecules and their relations to the physical and chemical properties of substances. The Dutch chemist J. H. Van’t Hoff based the stereochemical hypothesis he formulated (1874–75) on two principal postulates: (1) the valences of the saturated carbon atom are oriented in space toward the vertices of the tetrahedrons, and (2) the atoms or groups of atoms (substituents) in the molecule can freely rotate about single bonds without breaking them (unlike double bonds whose rigidity causes the formation of geometric isomers). Subsequently, the tetrahedral model of the carbon atom was confirmed by direct X-ray analysis. The supposition regarding the free rotation about single bonds was subjected to review, since it had been established that rotation about single bonds is not entirely “free”; during such rotation, energetically unequal geometric forms—conformations—or rotational isomers, some of which are energetically more favorable than others, emerge. Most of the molecules exist primarily in one or several stable (preferred) conformations. Energy barriers, which separate different conformations of the same substance, are usually equal to 20.9–62.7 kilojoules per mole (5–15 kilocalories per mole); individual conformations are constantly converting into one another. The investigations conducted by the British chemist D. Barton on the conformations in the cyclohexane series were of singular importance; Barton also introduced the term “conformational analysis” (1950).

In the paraffin hydrocarbon series, the necessity of conformational analysis is already evident in the case of ethane, which has two possible conformations: eclipsed (or even) and staggered (or odd). These are formed during the rotation of one methyl group with respect to another (Figure 1). 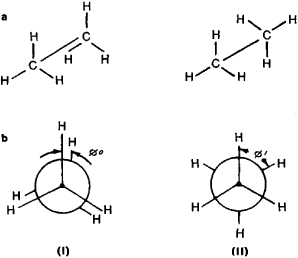 Figure 1. (a) Perspective formulas and (b) Newman’s projection (view of molecule from “above” along the C—C bond) formulas, depicting the eclipsed, or even (I), and staggered, or odd (II), conformations of ethane. Ф is the angle between substituents, known as the dihedral angle.

In an even ethane conformation, the hydrogen atoms are arranged closer together (“lined up behind one another”) and, consequently, the repulsion between them is stronger. Therefore the energy of the conformation is at a maximum (12.5 kilojoules per mole [3 kilocalories per mole] greater than the energy of the odd conformation). The molecule tends to pass from this energetically unfavorable state into one that is more stable (that is, into the odd conformation), with the hydrogen atoms arranged as far apart from one another as possible. In this more favorable position, rotation about the C—C bond is somewhat hindered. 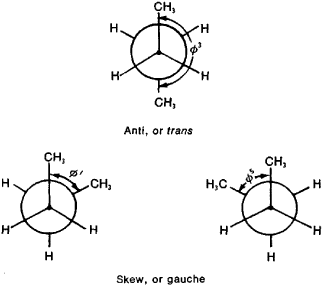 prove to be more convenient, for example, as in ethylene chlorhydrine, HOCH2—CH2C1 (Figure 3).

The nature of chemical transformations in a substance frequently depends on the conformation of its molecules. For example, the debromination of 2,3-dibromobutane with metallic zinc is possible only in a trans position of the reacting bromine atoms. Therefore, two diastereomers of 2,3-dibromobutane yield geometrically isomeric olefins (Figure 4). 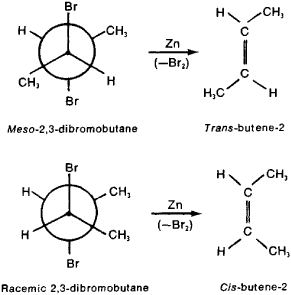 Conformational representations are highly important in explaining the properties of cyclic compounds, especially in the series derived from cyclohexane. The last primarily occurs in the chair form, which is particularly favorable since the valency angles are not distorted and the conformations along all the C—C bonds are odd (Figure 5). The remaining two valence bonds of each ring carbon atom are either oriented perpendicularly to the ring (axial bonds—a) or are directed along its periphery (equatorial bonds—e). The equatorial distribution of substituents is more favorable. For example, at room temperature, the conformational equilibrium of chlorocyclohexane e:a = 70:30. When the temperature is lowered to - 150°C, the interconversion rate is sharply reduced; under these conditions it is possible to isolate the pure e-form of chlorocyclohexane. A conformational analysis of the cyclohexane ring enables one, for example, to understand the reason why both cis- and trans- cyclohexane-1,2-dicarboxylic acid can form an anhydride (in both cases the dihedral angle between the bonds leading to the COOH groups is 60°). 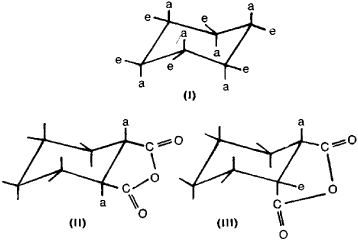 In addition to chemical methods, physical methods are also widely used in conformational analysis, particularly the nuclear magnetic resonance method. The data obtained on the conformations of organic compounds serve as an important basis for the interpretation and prediction of the properties of the compounds. Conformational representations have assumed great importance in the chemistry of synthetic and natural macromolecular compounds, as well as in the field of physiologically active substances.

Feedback
Flashcards & Bookmarks ?
Please log in or register to use Flashcards and Bookmarks. You can also log in with
Flashcards ?
My bookmarks ?
+ Add current page to bookmarks
Mentioned in ?
References in periodicals archive ?
The conformational analysis for three compounds was performed via molecular mechanics using the MM force field in ChemBio 3D Ultra software (Figure 4).
Structural and Quantitative Analysis of Three C-Glycosylflavones by Variable Temperature Proton Quantitative Nuclear Magnetic Resonance
[13] Johnson, W.C., Jr., 1996.In Circular Dichroism and the Conformational Analysis of Biomolecules (Fasman, G.
Structural properties, theory functional calculations (DFT), natural bond N-(4-Hydroxy-cyclohexyl)-acetamide
Initial X-ray structures for the molecules 3A, 3B and 3C were used for conformational analysis with HyperChem 8.0 [28].
Synthesis and conformational analysis of sterically congested (4r)-(-)-1-(2,4,6-trimethylbenzenesulfonyl)-3-n-butyryl-4-tert-butyl-2-imidazolidinone: X-ray crystallography and semiempirical calculations
We performed a 3-D conformational analysis using the 3-D tools provided by the PubChem Compound Database to obtain quantitative measures of overlap of structural shape and features among our seven C-18 fatty acids (Table 2).
Jacaric acid and its octadecatrienoic acid geoisomers induce apoptosis selectively in cancerous human prostate cells: a mechanistic and 3-D structure-activity study
It is important to have in mind that the different conformational analysis can be applied to any collection of molecular conformations.
In silico insights of L-glutamate: structural features in vacuum and in complex with its receptor
They cover the experimental measurement of vibrational absorption and vibrational circular dichroism spectra, the theory of infrared and VCD spectra, ab initio methods, conformational analysis, analyzing the infrared and VCD spectra of conformally rigid molecules, and applying VCD spectroscopy to organic chemistry.
VCD spectroscopy for organic chemists
Approaches to the conformational analysis of biopharmaceuticals.
Approaches to the conformational analysis of biopharmaceuticals
The conformational analysis for the neutral structures was carried out by changing the torsional angle ([theta], dihedral angle between central two thiophene rings, S-C-C-S) by 20 steps in the same direction between 0 (syn-planar) and 180[degrees] (anti-planar).
DFT study of bridged oligo(bithiophene)s. conformational analysis and opto-electronic properties
In the control group, single-strand conformational analysis was performed for carrier detection of the c.-3279T>G polymorphism within the phenobarbital-responsive enhancer sequence.
The polymorphism c.-3279T>G in the phenobarbital-responsive enhancer module of the bilirubin UDP-glucuronosyltransferase gene is associated with Gilbert syndrome
Binding of brevetexins end ciguatoxin to the voltage-sensitive sodium channel and conformational analysis of brevetoxin B.
Natural and derivative brevetoxins: historical background, multiplicity, and effects
Conformational analysis by [H.sup.1] NMR and circular dichroism spectroscopy, in addition to X-ray crystallography indicates that the cis isomer is favoured by up to 90% for la, while 1b is usually about 80% trans.
Chemical shifts: what's new in chemistry research? This bi-monthly column offers readers a concentrated look at the latest developments in chemistry from Canadian researchers
192-197 and 213-214 in Conformational Analysis, John Wiley & Sons, Inc., New York: xiii + 524 pp.
Synthesis of a new heterocyclic amide-imine