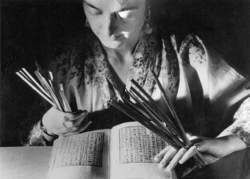 A woman consulting the Yi Jing while performing divination with the aid of Chinese fortune sticks. Fortean Picture Library.

Confucius wrote or edited a series of five works that formed the foundation of Confucianism. In the third century BCE they became formally known as the Wu Jing, or Five Classics. They consist of the Book of History, the Book of Poems, the Book of Change (Yi Jing or I Ching), the Spring and Autumn Annals, and the Book of Rites. Besides these texts, which form the basis for Confucian scholarship, a collection of his sayings was gathered shortly after his death. Called the Analects, they form the basis for the familiar Confucian stereotype:

Is it not a pleasure to learn and to repeat or practice from time to time what has been learned? Is it not delightful to have friends come from afar? Is one not a superior man if he does not feel hurt even though he is not recognized?

A ruler who governs his state by virtue is like the north polar star, which remains in place while all the other stars revolve around it.

A superior man in dealing with the world is not for anything or against anything. He follows righteousness as the standard.

Three other works, written shortly after Confucius' time, demonstrate his influence. The Book of Great Learning, the Book of Mean (the "Middle Way"), and the Book of Mencius have been elevated by many scholars to the rank of Confucian scripture. Mencius is second only to Confucius in the Confucian tradition, and he was a major commentator on the master.

For a man to give full realization to his heart is for him to understand his own nature, and a man who knows his own nature will know Heaven.

Confucianism went through a period of revival with the spread of Buddhism in China. The Yi Jing became widely read, but it was interpreted in a metaphysical fashion quite different from the method of classical Confucianism. Chou Tun-I (1017-1073 CE) is considered by many to be the great interpreter of this movement. His Explanation of the Diagram of the Great Ultimate marked the beginning of what is now called Neo-Confucianism. Together with his contemporary Chang Tsai's The Western Inscription, this reinterpretation transferred Confucian thought to a spiritual plane that protected and nourished people during the twentieth-century communist onslaught that destroyed the political, social, and economic base of traditional Confucianism.

Feedback
Flashcards & Bookmarks ?
Please log in or register to use Flashcards and Bookmarks. You can also log in with
Flashcards ?
My bookmarks ?
+ Add current page to bookmarks
Mentioned in ?
References in periodicals archive ?
(44.) See "Excerpt from Ricci's True Meaning of the Lord of Heaven (1603) to illustrate the concordance between Christian moral teachings and Confucian texts and Ricci's attacks on Buddhism," in Po-chia Hsia, Matteo Ricci, 99-100.
The Biography of St. Augustine in the Catholic Encounter with China
Later eschewing neo-Confucianism and its metaphysical innovations, Shibusawa was most fond of the Analects, one of the original Confucian texts compiled by Confucius' followers after his death.
CONFUCIAN CAPITALISM: SHIBUSAWA EIICHI, BUSINESS ETHICS, AND ECONOMIC DEVELOPMENT IN MEIJI JAPAN
Actually, as early as in the 16th and 18th centuries, the Western Christian missionaries in China were already perplexed by the religiousness issue of Confucianism, and has triggered many disputes on the complicated Confucian rituals and certain confusing concepts and ideas recorded in classic Confucian texts (Zhang 2005, 146-159).
CONFUCIANISM: THE QUESTION OF ITS RELIGIOUSNESS AND ITS ROLE IN CONSTRUCTING CHINESE SECULAR IDEOLOGY
It's a clever tactic, but politeness and even flattery is the Chinese way, rooted in its three classical Confucian texts that set out how to behave in public and private.
How China really perceives 'Auntie May'
believers to contextualize and reinterpret Confucian texts critically in
Confucius is Our Prophet: The Discourse of Prophecy and Religious Agency in Indonesian Confucianism
2) by Li Chengren contains an inscription referring to the first emperor of China, Qin Shi Huang, who not only commissioned the thousands of terracotta warriors to guard his tomb but also destroyed nearly all of the Confucian texts because he was afraid they would inspire insurrection.
Chinese puzzles: China's bewildering bapo paintings deserve to be better known
In his commentary to the Mencius, one of the major Confucian texts from early China, Zhu Xi remarks:
Sages and the majority: changing paradigms of political communication in late Ming China (1590s-1640s)
Junzi [TEXT NOT REPRODUCIBLE IN ASCII], a term used in Confucian texts, is variously construed as "the righteous man" or "the scholar" (Legge 1971, 150; Legge 1971, 170).
Competing discourses: the metamorphosis of Song Jiang's image in China
Roetz analyzes classical Daoist and Confucian texts as well as the prevailing natural context to argue against the dominant view--subscribed to by Max Weber among others--that classical Chinese culture promoted spiritual oneness and harmony with nature.
Hans Ulrich Vogel and Gunter Dux, editors, Introduction and Overview by Mark Elvin, Concepts of Nature: A Chinese-European Cross-Cultural Perspective
(6) Upon arriving in Macao in August 1582, Matteo Ricci was therefore assigned a Chinese tutor who taught him Chinese using the classic Confucian texts known as the Four Books.
Matteo Ricci: pioneer of Chinese-Western dialogue and cultural exchanges
This omission becomes more glaring when Wang himself correctly notes the obvious authorship issues in Confucian texts. When attacking the claim that Confucius precedes Laozi, Wang employs the argument that Kongzi, 'Confucius' in Latin, simply means 'Master Kong'.
Keping Wang: Reading the Dao: A Thematic Inquiry
In light of the original Saying of Tao, Wang's eliminating hermeneutic leads to a critique of the Confucian texts as well as of traditional hierarchical authority, while articulating the equality of people in the actual course of daily life.
God's mission as word event in an age of world Christianity: an Asian linguistic-transcultural model