Confucius (kənfyo͞oˈshəs), Chinese K'ung Ch'iu or K'ung Fu-tzu, Pinyin Kong Fuzi, c.551–479? B.C., Chinese sage. Positive evidence concerning the life of Confucius is scanty; modern scholars base their accounts largely on the Analects, a collection of sayings and short dialogues apparently collected by his disciples, and discard most of the later legends. Confucius was born in the feudal state of Lu, in modern Shandong prov. Distressed by the constant warfare between the Chinese states and by the venality and tyranny of the rulers, he urged a system of morality and statecraft that would preserve peace and provide people with stable and just government. He gathered about him a number of disciples, some occupying high positions, although Confucius himself was at most granted an insignificant sinecure, possibly because of his extremely outspoken manner toward his superiors. From about his 55th to his 65th year he journeyed to several neighboring states, but he was never able to induce any ruler to grant him high office so that he might introduce his reforms. Later tradition depicts Confucius as a man who made special study of ancient books, in an effort to restore an older social order. It is said that he was a minister of state and the author, editor, or compiler of the Wu Ching [five classics] (see Chinese literature). His supposed doctrines are embodied in Confucianism. 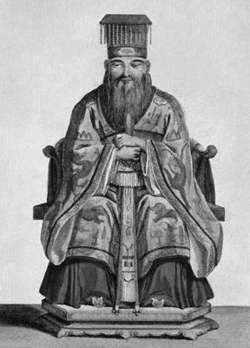 Chinese name Kong Zi or K'ung Fu-tse. 551--479 bc, Chinese philosopher and teacher of ethics (see Confucianism). His doctrines were compiled after his death under the title The Analects of Confucius
Collins Discovery Encyclopedia, 1st edition © HarperCollins Publishers 2005

Feedback
Flashcards & Bookmarks ?
Please log in or register to use Flashcards and Bookmarks. You can also log in with
Flashcards ?
My bookmarks ?
+ Add current page to bookmarks
Mentioned in ?
References in periodicals archive ?
and the drama on the birth of Confucius may have a similar intention in
Confucius is Our Prophet: The Discourse of Prophecy and Religious Agency in Indonesian Confucianism
He spoke recently at the celebration of a decade of Confucius Institute at the university where it started from, with teaching of the Chinese Language and culture to the university's students and the general public, which has now blossomed into teaching Chinese language at diploma and degree levels.
At 10, Confucius Institute Now Focuses On Capacity Building, Says UNIZIK VC
He said that under the Confucius Institute, they are imparting the education of Chinese language in Pakistan that will increase the people to people contact and to learn from each other experiences.
Pak-China agriculture ties to help combat daunting issues
The Confucius Institute at UL is the first in West Africa, helping hundreds of Liberian youth to talented in learning Chinese language to find jobs in Chinese companies here.
China hails Confucius Institute in Liberia
The Confucius Institutes are non-profit public cultural institutions established since 2004 by the People's Republic of China in several cities around the world to provide Chinese language courses, support local teaching activities, deliver HSK language degrees (official Chinese language proficiency tests) and contribute to the spread of Chinese culture.
First Confucius Institute for Chinese language teaching inaugurated in Tunis
(26) By the Eastern Han, four of the Five Classics had at least been partially attributed to the duke, while the Annals remained the only Classic still solely attributed to Confucius. (27) Du Yu's ascription of the foundational part of the Annals to the duke gives a more hoary distinction to the Classic and elevates the status of Zuo's exegesis, particularly exegesis on parts of the Annals he claims date back to the Western Zhou.
The Adaptive Commentary of Du Yu (222-284): Schematizing the Presence and Absence of "Norms" (li [phrase omitted]) in the Tri-Partite Annals through the Zuo Tradition
Guests included: Davao City Mayor Sara Duterte-Carpio, Director of Ateneo Confucius Institute Dr.
China and communities in SM Lanang Premier
He said that Confucius Institute Islamabad is our pride and won 4 times institute of the year award from Chinese government.
Chinese corporation's delegation visits NUML
Among their topics are a critical overview of some contemporary Chinese perspectives on the composition and date of the Lunyu, Confucius and his disciples in the Lunyu: the basis for the traditional view, Confucius' sayings entombed: two Han Dynasty Lunyu manuscripts, manuscript formats and textual structure in early China, and Sima Qian's Kongzi and the Western Han Lunyu.
Confucius and the Analects Revisited: New Perspectives on Composition, Dating, and Authorship
The post Chinese language lesson to start at UCy's Confucius Institute appeared first on Cyprus Mail .
Chinese language lesson to start at UCy's Confucius Institute