estrogen (ĕsˈtrəjən), any one of a group of hormones synthesized by the reproductive organs and adrenal glands in females and, in lesser quantities, in males. The estrogens cause the thickening of the lining of the uterus and vagina in the early phase of the ovulatory, or menstrual, cycle (see menstruation); in lower animals cyclical estrogen secretion also induces estrus, or “heat.” The estrogens are also responsible for female secondary sex characteristics such as, in humans, pubic hair and breasts, and they affect other tissues including the genital organs, skin, hair, blood vessels, bone, and pelvic muscles.

The ability of estrogens to suppress secretion of follicle-stimulating hormone (FSH) by the pituitary gland and thereby inhibit ovulation makes estrogen and estrogenlike compounds major components in oral contraceptives. Estrogen replacement therapy (ERT) uses synthetic estrogen (e.g., Premarin), typically given with progestins (e.g., Provera) to treat the physical changes of menopause, including hot flashes and vaginal dryness. ERT also retards the development of osteoporosis in postmenopausal women but increases the risk of breast cancer, heart attack (see infarction), stroke, and, when not given with progestins, uterine cancer. Estrogens are also used to treat prostate cancer. 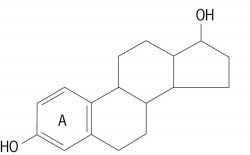 (US), estrogen
any of several steroid hormones, that are secreted chiefly by the ovaries and placenta, that induce oestrus, stimulate changes in the female reproductive organs during the oestrous cycle, and promote development of female secondary sexual characteristics
Collins Discovery Encyclopedia, 1st edition © HarperCollins Publishers 2005