one of the most important types of intramolecular interaction of atoms and bonds in organic compounds. Conjugation results from the interaction of the electronic structures of the atoms, primarily the structures of valence electrons. The major feature of conjugation is the distribution throughout the conjugated system of the electron density, which is made up of p and π electrons. 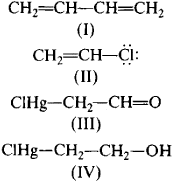 A feature common to all conjugated systems is the dispersal of the electron density of the p and π electrons throughout the conjugated system. This dispersal determines the physical and chemical properties of the molecule. Thus, single bonds take on certain characteristics of double bonds, for example, shorter bond lengths. In butadiene, the length of the central C-C is 1.46 angstroms rather than the 1.54 angstroms expected of a single bond. The effect of conjugated bonds is also seen in ultraviolet and infrared spectra and in dipole moments. The most characteristic chemical feature of conjugated systems is the capacity to enter into reactions with the participation not only of one multiple bond but of the entire conjugated system as a whole. The addition of hydrogen chloride to butadiene serves as an example:

The actual distribution to the electron density in a conjugated system cannot be expressed by simple structural formulas. A more accurate picture is obtained by sets of contributing structures and by formulas in which the bonds are represented by dotted lines (one-and-a-half bonds) and the direction of electron shift is represented by curved arrow:

Conjugation of bonds requires that the participating electronic structures be located in the same plane. Molecules whose structures do not permit this arrangement are said to exhibit steric hindrance to conjugation. Thus, in frans-stilbene (a), according to data from the ultraviolet spectrum, a stronger conjugation is found than in cis-stilbene (b), where the benzene nuclei cannot be accommodated in the same plane as the double bond: