Conjugation refers to the way we inflect (change the form of) verbs to create particular meanings.
When we discuss conjugating verbs, we usually refer to ways in which we change a verb in order to reflect grammatical tense, but we also conjugate verbs to reflect aspect, mood, voice, person, and speech.
Continue reading...

inflection, in grammar. In many languages, words or parts of words are arranged in formally similar sets consisting of a root, or base, and various affixes. Thus walking, walks, walker have in common the root walk and the affixes -ing, -s, and -er. An inflectional affix carries certain grammatical restrictions with it; for example, with the plural inflection -s, a change from singular to plural in the noun tree/trees requires a concommitant change in the verb form from singular to plural: “the tree is green,” “the trees are green.” Other examples of English inflectional suffixes are the verb tenses. Many languages have far more extensive inflection than English, e.g., Latin, Eskimo, Arabic. In Latin grammar the typical noun and adjective are inflected for case and number, and the adjective is additionally inflected for the gender of the noun. Latin verbs have overlapping categories of inflection: mood, voice, tense, person, and number. Noun inflection is called declension, and the inflection of verbs is called conjugation. To be distinguished from inflectional affixes are those of derivation. Derivation is the process of forming words from other words or roots by the addition of affixes that in themselves either have meaning or denote word function. Derivational affixes in English may be either prefixes—e.g., de-press, un-common—or suffixes—e.g., work-er, retire-ment, happi-ness. The name stem is given to a root together with its derivational affixes; thus in racket-eer-s, racket is the root, racketeer the stem, and -s the plural inflection. Beginning in the 19th cent., the modification of a root or base by the amount of inflection or derivation in a language was used as a basis for classification. An isolating language is one in which there are only roots, with no derivation or inflection, such as Chinese. On the other hand, inflected languages, e.g., English and Latin, use roots, stems, and affixes, but the amount of inflection is not as great as in agglutinative languages where roots and affixes are readily identifiable, e.g., Turkish baba “father,” babam “my father,” babama “to my father.” The old belief that agglutinative languages were the most primitive and isolating languages the most civilized is no longer held, it being recognized that every language is just as expressive as any other and can develop new vocabulary to fit new situations. See ablaut; grammar; umlaut; English language.

recombination, process of “shuffling” of genes by which new combinations can be generated. In recombination through sexual reproduction, the offspring's complete set of genes differs from that of either parent, being rather a combination of genes from both parents. In recombination by crossing over, alleles of genes are exchanged between homologous chromosomes during meiosis. This exchange results in the generation of new combinations of alleles on segments of chromosomes, counteracting the tendency of linked genes, i.e., genes on the same chromosome, to be always transmitted as a group. Various mechanisms for introducing new genetic material have been discovered in bacteria. These mechanisms have been used extensively to study gene structure and function. In transformation, a fragment of free deoxyribonucleic acid (DNA) is inserted in a recipient bacterium (see nucleic acid). The free DNA fragment comes from the chromosome of a bacterial cell that has been lysed, or dissolved. In transduction, genetic material is transferred from one bacterium to another by a carrier virus. When a virus enters a bacterium, its DNA can be inserted into the bacterial chromosome, reproducing along with the host chromosome in cell division. Subsequently, sometimes many bacterial generations later, the viral genetic material may detach from the bacterial chromosome, taking some of the bacterial chromosomal material along with it. The bacterium then lyses, the viral particle enters a new bacterium, and the viral particle, together with the bacterial genes it carries, is inserted into the chromosome of the new host. In conjugation, which occurs between bacteria of the same species and also between some bacteria of different species, either an entire chromosome or a part of one is transferred from a bacterium of a donor-mating strain to a bacterium of a recipient-mating strain. Donor strains, denoted male, contain a sex-factor particle composed of a nucleic acid; recipient, or female, strains lack the particle (see episome). Conjugation has been used to construct genetic maps, i.e., the ordering of genes along a chromosome. Evidence from transformation experiments was used to support the idea that DNA was the genetic material.
The Columbia Electronic Encyclopedia™ Copyright © 2022, Columbia University Press. Licensed from Columbia University Press. All rights reserved.
The following article is from The Great Soviet Encyclopedia (1979). It might be outdated or ideologically biased.

(1) In conjugate algae, a special sexual process that involves the merging of the contents of two externally similar vegetative cells.

(2) In infusorians, an exchange of sexual nuclei and their subsequent fusion by pairs, during which pairs of infusorians draw near one another on the mouth side. During fusion the macronucleus (vegetative nucleus) is gradually destroyed and the micronucleus (sexual nucleus) divides twice by meiosis. Next, three nuclei are destroyed while one divides again; each of its halves is exchanged for the half-nucleus of its partner—that is, they merge to form a syncaryon, restoring a double set of chromosomes. The syncaryon then divides; a portion of the products of its division becomes a macronucleus, and the other part becomes a micronucleus (see Figure 1). Sometimes a small amount of cytoplasm is transferred in the process from one cell to the other. The process of conjugation in various infusorians may differ sharply in its details.

(3) In bacteria, a means of transferring genetic material from one bacterial cell to another. Two bacteria unite by means of a delicate bridge, across which a piece of a strand of deoxyribonucleic acid (DNA) is transferred from one cell (the donor) to the other (the recipient). The genetic properties of the recipient change according to the amount of genetic information in the transferred piece of DNA. 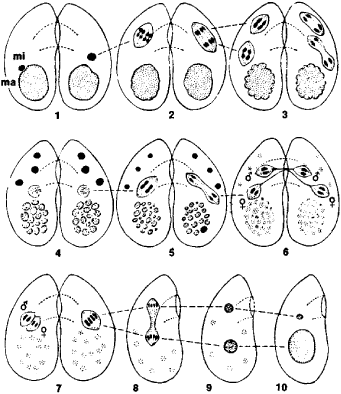 the scheme of the inflectional forms of a verb. In the paradigmatics of a language, conjugation is in contrast to declension. Conjugational forms express the categories of person, number, gender, tense, and mood.

Conjugational forms may be synthetic or analytic. Conjugational systems in different languages vary in terms of the number of tenses and moods they contain. Russian has three tenses and three moods, ancient Greek seven tenses and four moods; some North American Indian languages, such as Hopi, have more than nine moods. Conjugated verb forms express the categories of person, number, and so on, and also the nature of the syntactic bonds between the verbal predicate and the subject and object. For example, Hungarian has both object-related and nonobject-related conjugations: láto-k (“I see”), láto-m (“I see [this specific object]”). In some languages with an ergative structure, the verbs have two paradigms relating to the category of person: an ergative paradigm and an absolute paradigm.

[‚kän·jə′gā·shən]
(botany)
Sexual reproduction by fusion of two protoplasts in certain thallophytes to form a zygote.
(invertebrate zoology)
Sexual reproduction by temporary union of cells with exchange of nuclear material between two individuals, principally ciliate protozoans.
(microbiology)
A process involving contact between two bacterial cells during which genetic material is passed from one cell to the other.
McGraw-Hill Dictionary of Scientific & Technical Terms, 6E, Copyright © 2003 by The McGraw-Hill Companies, Inc.

1. a type of sexual reproduction in ciliate protozoans involving the temporary union of two individuals and the subsequent migration and fusion of the gametic nuclei
2. (in bacteria) the direct transfer of DNA between two cells that are temporarily joined
3. the union of gametes, esp isogametes, as in some algae and fungi
4. the pairing of chromosomes in the early phase of a meiotic division
5. Chem the existence of alternating double or triple bonds in a chemical compound, with consequent electron delocalization over part of the molecule
Collins Discovery Encyclopedia, 1st edition © HarperCollins Publishers 2005

Feedback
Flashcards & Bookmarks ?
Please log in or register to use Flashcards and Bookmarks. You can also log in with
Flashcards ?
My bookmarks ?
+ Add current page to bookmarks
Mentioned in ?
References in periodicals archive ?
Ambrx ADCs have preclinically demonstrated high potency and a wider therapeutic index than ADCs created using conventional nonspecific conjugation. Ambrx will receive an up-front payment of $15 million.
Ambrx forms collaboration with Astellas
Rallytable Verb Conjugation and Vocabulary Activities
How to be an effective substitute teacher in the Spanish classroom
“We set out to get the best possible dictionary content, so that when we added in our unique app features like verb conjugation and number translation, we'd have the most reliable tool out there.
Ultralingua Announces Russian-English Dictionary Apps
Hajdu has mentioned that in Nenets the choice principles of the indefinite and definite conjugations seem to be inconsistent (see Wickman 1997 : 87).
On the 3rd person verbal mark er *-sV and the definite conjugation in Uralic languages
Stated differently, it is generally assumed that complex verbal conjugations are lost over time to the gain of a more regularized inflectional system.
Demystifying inflectional push-pull in ESL pedagogy
It is divided into two main parts: an alphabetically arranged Spanish verb directory followed by a list of ninety-two common verbs that provide the previously listed verbs with models of conjugation. One of the main features of this work is that it includes over four thousand verbs.
Spanish Verbs
Open-class verbs can be assigned to the three basic conjugations in table 3, which follows EKK (Erelt, Erelt, Ross 2000 : 277) in essential respects.
Conjugation classes in Estonian/[TEXT NOT REPRODUCIBLE IN ASCII]
The aim and purpose of the book by Erika Kortvely is to synchronically describe and diachronically explain the Tundra Nenets verbal conjugation. The author offers a fine systematic overview of Uralic languages focusing on the number of conjugations in each one of them.
E. Kortvely, Verb Conjugation in Tundra Nenets
Designed for students who already have a grasp of Middle Egyptian, coverage includes the orthography and writing system, morphosyntactic features, sentence conjugations and simple sentences, the nominal sentence, clause conjugations and complex sentence forms, and complex sentences and simple clause groupings.
Late Egyptian grammar; an introduction, 2d English ed