a process for producing cast stock (for rolling, forging, or pressing) from molten steel; the stock is formed continuously at a rate determined by the rates of supply of molten metal to one side of the ingot mold (crystallizer) and of removal of the partially solidified stock from the opposite side.

Continuous steel casting has a number of advantages over ordinary casting. Among these are the lower consumption of metal (10—15 percent) per ton of usable rolled products through a reduction in trimming from the top and bottom parts of the stock and lower capital expenditures for the construction of metallurgical plants, since continuous casting requires no supply of ingot molds and consequently there is no need for plant divisions for the production of the molds and for the extraction of stock from the molds and no need for blooming and slabbing mills, which reduce the large castings to stock for subsequent rolling. In addition, continuous casting creates conditions for full mechanization and automation of the casting process. Finally, the more rapid solidification during the continuous casting process leads to increased homogeneity and better quality of the metal.

A method for the direct production of steel from the molten metal (called ingotless metal rolling) was proposed in 1855 by H. Bessemer. Experimental studies in this area in various countries did not yield positive results. A more promising method consisted in the production from the molten metal of an intermediate blank (whose dimensions were usually smaller than those of the casting mold), rather than of a finished article. The development of continuous casting of stock from nonferrous metals and alloys (mainly aluminum and copper) through a water-cooled ingot mold-crystallizer began in the 1930’s. Steel blanks were first produced by this method by S. Junghans (Germany) in 1939. Work on the introduction of continuous steel casting in the USSR began in 1944, and the first industrial installation was put into operation at the Krasnoe Sormovo Gorky Plant in 1955. In 1972 there were 36 such units in 21 metallurgical plants in the USSR; as of 1973 there were more than 500 units in operation worldwide. Outside the USSR, the method has become widespread in the USA, Japan, the Federal Republic of Germany, and Italy.

During continuous steel casting, molten metal enters an open-ended crystallizer mold (Figure 1). The walls of the crystallizer (usually made of copper) are intensively cooled by water circulating through channels in them. A temporary bottom, called the seed charge, is introduced into the crystallizer at the start of the process. The metal hardens near the crystallizer walls and the seed charge, and the extraction of the shell of the stock from the crystallizer at a preset speed is begun. Molten metal is continuously fed into the crystallizer at a rate sufficient to maintain a constant level of metal throughout the casting process. To reduce the force required for drawing out the shell of the stock, the crystallizer is given a reciprocating motion along its longitudinal axis, and a lubricant is applied to its walls. The surface of the molten metal is protected from oxidation by a coating of synthetic slag or by an inert-gas atmosphere. As the stock, with a molten interior, emerges from the crystallizer, it passes into the zone of secondary cooling, where its surface is sprayed with atomized water from jets. After it has completely hardened, the stock is cut into pieces of required length. The distance L (in meters) from the level of metal in the crystallizer to the point of complete crystallization of stock that has thickness a (in meters) and that is being poured at casting rate v (in m/min) is equal to (240–340)a2. v The value of the proportionality constant depends on the shape and size of the stock and on the type of steel being cast. 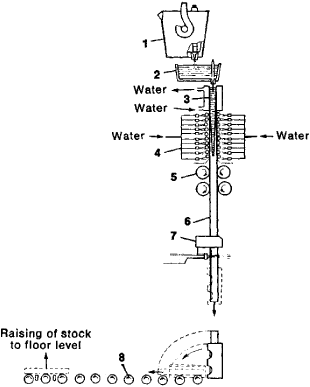 Figure 1. Continuous steel casting unit: (1) steel-pouring ladle; (2) intermediate ladle (for lowering and stabilization of the head of molten metal entering the crystallizer and for distribution of metal over several crystallizers in multiple-pass installations); (3) crystallizer; (4) zone of secondary cooling, with devices for guiding the stock and for water supply; (5) pinch rolls; (6) ingot; (7) mechanism for cutting stock (oxygen cutters or shears); (8) mechanism for removal of stock

Continuous steel casting units of the vertical type (Figure 2,a), in which the stock was formed and cut in the vertical section of the units, were used before 1963. For casting stock of relatively great thickness, the cutting section was located 15–20 m from the crystallizer, and the total height of such an installation could exceed 40 m. Accommodation of such installations required the construction of towers or pits. Efforts to reduce the height of continuous steel casting units led to the design of installations of the radial and curved types (Figure 2,b and c, respectively). In radial units the crystallizer and guide devices for secondary cooling are located along an arc of predetermined radius (usually 30–40 thicknesses of the cast stock). At the end of the radial section the stock passes through pinch rolls and is guided into a horizontal position, in which it is cut into standard lengths. In units of the curved type, the crystallizer and part of the zone of secondary cooling have a constant radius; the radius then increases, and the stock is gradually straightened.

Continuous steel casting units of the radial and curved types, in which the incompletely hardened stock passes into the horizontal section, make possible a significant increase in the casting rate for stock of large cross section, since the cutting section may then be located at a sufficiently great distance from the crystallizer (30–35 m). The total height of such installations usually does not exceed 12 m.

Because of its advantages, continuous steel casting has been adopted as the basic method of casting in all new steel foundries. The method will also be widely used in the modernization of existing plants.

The highest productivity of continuous steel casting units is achieved through their use in conjunction with oxygen converters. In this case, the cycles of tapping of steel from the converter and of casting in the continuous casting unit coincide, which makes possible a continuous supply of molten metal to the installation over long periods. In plants with modern arc furnaces, in which the smelting cycles are maintained with sufficient precision, casting operations may also be set up “in tandem,” in which case a single unit receives metal from several furnaces. Units for continuous steel casting that combine the casting process and continuous rolling into a single flow of operations are promising; this leads to reduced power consumption, better quality of the castings, increased yield of usable product, and a shortening of the cycle of production operations from the smelting of steel to the production of the final rolled stock. Such units have already been put into operation both in the USSR and abroad. According to the forecast for the development of ferrous metallurgy, continuous casting will account for about 60 percent of the total steel production in the USSR by 1990. At the same time, the production capacity required will be 30 percent less than for ordinary casting.

Feedback
Flashcards & Bookmarks ?
Please log in or register to use Flashcards and Bookmarks. You can also log in with
Flashcards ?
My bookmarks ?
+ Add current page to bookmarks
Mentioned in ?
References in periodicals archive ?
Future research will focus on the practical realization of these rollers and testing them on a continuous steel casting plant to validate the method proposed by the authors.
Optimized solution for the withdrawal plant of a steel vertical continuous casting installations by changing the roller's surface
Present level of development of continuous steel casting in Ukraine can not but cause concern.
Determination of swinging radius of the MCCB mould