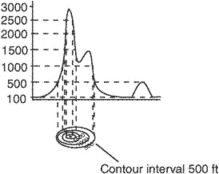 The distance between two consecutive contours on a map. The contour interval on a map is constant.
An Illustrated Dictionary of Aviation Copyright © 2005 by The McGraw-Hill Companies, Inc. All rights reserved

Feedback
Flashcards & Bookmarks ?
Please log in or register to use Flashcards and Bookmarks. You can also log in with
Flashcards ?
My bookmarks ?
+ Add current page to bookmarks
Mentioned in ?
References in periodicals archive ?
Caption: Figure 14: Composite spatial pattern for the 200 hPa vertical velocity anomaly (contour intervals 0.2 x [10.sup.-2] x Pa[s.sup.-1]) field during anomalous HREs based on 1980-2010 climatology.
Assessing Prone Areas to Heavy Rainfall and the Impaction of the Upper Warm Temperature Anomaly during March-May Rainfall Season in Tanzania
For regions of complex geomorphology, it was inserted a virtual control point at a specified place in each direction according to various geomorphic features identified from the original map, which prevents the interpolation result from exceeding the contour interval. Finally, the points with feature geomorphic information were used to construct local surface spline functions for interpolation.
Algoritmo para la generacion de Modelos Digitales de Elevacion considerando lineas de contorno y caracteristicas geomorficas
The determining factors are the steepness of the slopes and the contour interval that will be used.
Chapter 8 Topographical surveying
with 2-ft contour interval, while the more rural area was mapped at 1 in.
Incremental implementation of a GIS
The main topographic map has 40-foot contour intervals, and the two detailed inset maps of higher-use areas have 20-foot contour intervals.
New winter recreation map ready
The map provided a great deal of orientation information, but was not a good choice for actual land navigation when it came to depicting contour intervals. The map didn't provide me an appreciation of the ruggedness of the surrounding terrain, and I was falsely convinced that there was a safer and shorter route back to the main road.
Mountain of trouble
The assignment is to make up a land formation with the guidelines to include the following requirements: at least one railroad, show contour intervals, label all contour lines, show rivers, show the five map symbols with the use of the map key, indicate the hills, depressions and the direction rose.
One man's science ..
During the initial phase of the experiment, the GCMP and GCRT systems were similar to CMP and CRT, respectively, except that five 0.5 m wide unplowed strips were left at contour intervals based on a 1.5 m vertical drop in elevation.
Animal Powered Tillage Translocated Soil Affects Nutrient Dynamics and Soil Properties at Claveria, Philippines