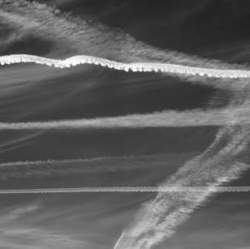 We see contrails in the sky all the time, sometimes many of them criss-crossing each other. Might those harmless-looking whisps contain something sinister? And what about chemtrails?

We’ve all grown used to seeing those white vapor trails left in the sky by jet aircraft. We’ve been told that those wispy lines are nothing but the natural by-product of exhaust fumes. Lately, though, conspiracists insist that a black-ops agency working with the New World Order is systematically releasing a chemical spray that spawns disease and mind control upon the U.S. population.

Contrails are the thin, smoky-looking white streams left in the wake of aircraft flying at high altitudes. Contrails (short for “condensation trails”), also known as vapor trails, result from natural chemical and physical reactions in the wake of an aircraft. They vary greatly in length and duration, depending on atmospheric conditions at the flight altitude. Contrails can be miles long and last for many minutes or they can vanish almost immediately a short distance behind the airplane. The key to their formation and behavior is that they are made largely of ice crystals.

The basic two types of engines used in planes are piston engines, powered by petro/gasoline, and jet engines, normally fueled by paraffin/kerosene. Both jet and piston engines draw air from the surrounding atmosphere to combine with the fuel in order to create the combustion that powers them. Air contains water vapor in some relative concentration, varying from dry to saturated, at which point rain, snow, or sleet may result. Taking in the moisture with the air, an airplane’s engine heats the vapor, which then emerges as superheated steam in the exhaust. There will be more steam or less, depending on the amount of moisture in the air to begin with and on the fuel-to-air ratio. Typically, for every gallon of fuel burned, one gallon of steam is produced.

Aircraft exhaust also contains countless microscopic solid particles produced during combustion. When the surrounding air is cold enough, the ejected steam almost instantly condenses on these particles and freezes. These ice-coated particles are what constitutes a contrail. The air must be very cold for this to happen, which is why contrails generally form only at fairly high altitudes. In fact, contrails were rarely observed until the end of World War I, when aircraft first began to reach altitudes of thirty thousand feet or more.

Records dating from the 1940s in World War II state that contrails gave away the position of U.S. bombers to the German fighter pilots hunting them, and many pilots and planes were lost as a result. Hundreds, if not thousands, of cold war pilots complained that contrails pinpointed their exact location and made them obvious targets.

This vulnerability provides an obvious reason for military involvement in experiments regarding contrails and the like: what causes them, what their properties are, and how to make them invisible. This military interest is most likely the springboard for the many conspiracy theories about secret government projects involving contrails, chemtrails, HAARP, weather manipulation and control, bio warfare, and a whole gamut of other classified experiments and operations.

According to some scientists, the environmental effects of flying aircraft had not been accurately measured from the time the Wright brothers took flight in 1903 until September 11, 2001. In the aftermath of the 9/11 attacks, commercial flights were grounded for three days. The Climate Impact Experiment sponsored by NASA was able to gauge the impact that flying has on the environment. The results definitively show that the air we breathe is changed by the exhaust from aircraft.

Dr. Cheryl E. Merritt, a researcher and professor at Yale University, is one of many scientists who take note of the wonders of flight yet also warn of the growing harmful consequences of atmospheric pollution from aviation. Dr. Merritt is especially concerned that very-high-altitude supersonic transport planes could engender stratospheric air pollution with “consequent changes in climate.” Besides the water vapor that forms contrails, jet exhaust contains carbon dioxide, oxides of nitrogen, and particulate matter including substances known as aerosols. Merritt notes that “it is speculative just how harmful these pollutants can be.”

Surprisingly, given the potential dangers, as of today the U.S. Environmental Protection Agency reports having no regulations addressing contrails and their atmospheric effects. Some observers believe that this lack of regulation is itself part of a conspiracy—a conspiracy centering less on contrails than on their sinister cousins, chemtrails.

As opposed to contrails, which are the relatively natural product of high-altitude airplane-engine combustion, chemtrails consist of man-made chemicals deliberately sprayed from aircraft. There are legitimate reasons to dispense chemical in this manner: crop dusting over farm fields to destroy weeds or insects harmful to crops; cloud seeding to bring rain to areas of drought; firefighting by dumping fire extinguishing chemicals on forest fires or other large blazes; and the release of smoke trails in air shows or to create advertising messages. The chemtrails that have caused great concern are none of these, but rather the artificial clouds that conspiracists are convinced are raining down influenza and other diseases on an unsuspecting populace.

Chemtrails have become the focus of one of the most popular of the conspiracy theories of late, thanks to frequent discussions over the airwaves by popular radio talk show hosts such as Art Bell, George Noory, and Ian Punnet on Coast to Coast and Jeff Rense on the Jeff Rense Program. With worldwide audiences numbering in the millions, these programs broadcast the concerns of scientists and laypersons who call in to report the accumulating data regarding chemtrails. Many theorists believe that a secret government project is in effect to alter the thought processes of people and render them powerless to resist New World Order dictates. Others believe that our own government is engaged in a massive depopulation effort so calculatedly subtle and dangerous that potentially millions will die. The methodical and deliberate poisoning of the air we breathe is being manipulated by the spraying of chemicals from aircraft.

Within the last few years the fear of chemtrails has become so intense that thousands of websites devoted to the topic have appeared on the Internet. Many call for action to stop this effort, which they believe to be a methodical program of the New World Order to sicken and kill off the weak and indigent, then manipulate the healthier citizens remaining.

To the average person, contrails and chemtrails in the sky may look to be of the same origin, but there are key differences. Chemtrails are usually thicker, extend farther across the sky, and are arranged in patterns of X’s, tic-tac-toe grids, and cross-hatched and parallel lines. Rather than dissipating in a few minutes, as contrails generally do, chemtrails expand and drip “feathers” and “mare’s tails.” In about half an hour they spread into wispy formations that come together to form a thin white veil or a pseudocirrus-type cloud that can persist for several hours. It is this false cloud that will rain down various highly contagious diseases and/or mind-control hallucinogens.

Skeptics endeavor to squelch paranoia by pointing out that such a massive program of chemtrail spraying as conspiracists suggest would require an extensive cover-up involving thousands of aviation employees and military personnel. Conspiracy theorists see no problem in black-ops or New World Order agents achieving such a cover-up of the participants in spraying chemicals on a populace that has already been deceived about the truth on innumerable prior secret government operations.

Skeptics also dismiss such a plot by pointing out how ineffective it would be to release a cloud of spray above 30,000 feet and leave it to the vagaries of high-altitude winds. Conspiracy buffs say that such an objection might have value if the chemtrails were targeted for a specific area. As it is, however, the sinister agencies simply wish to disperse the chemicals as widely as possible.

As reports of chemtrails continued to raise the ire of citizens across the nation into the twenty-first century, an increasing number of serious-minded individuals took offense at establishment scientists’ arch dismissal that only paranoid conspiracy theorists were experiencing the unidentified fallout. Some claimed they became seriously ill as a result of being drenched by the chemicals that were released into the skies above them. The mysterious Morgellons disease is often mentioned as a result of exposure to chemtrails.

Some conspiracists are adamant in their claims that HAARP, a secret weapon system that taps into the limitless plenum of energy surrounding Earth, uses chemtrails as frequency reflectors from its ground and space bases so that it might direct its binary weapons system against whatever segment of the human population is designated as a target.

In 2009, some scientists admitted that certain vapor trails from airplanes had been doused with chemicals to create artificial clouds that could block out the sun’s rays, thereby helping to decrease the effects of global warming. Climate scientist Ken Caldeira of the Carnegie Institution in Stanford, California, recommended that jumbo jets deposit clouds of tiny particles of sulphur dioxide to reflect away sunlight from the earth. Nobel Prize winner Paul Crutzen suggested that 747s should release huge quantities of sulfur particles into the stratosphere to cool down the atmosphere. Scientist Tom Flannery also predicted the eventual need for humanity to disperse large amounts of sulphur into the stratosphere to shield Earth from the sun. The U.S. Department of Energy’s Savannah River National Laboratory in Aiken, South Carolina, began shooting huge amounts of porous-walled glass microspheres into the stratosphere.

While depositing massive amounts of sulphur dioxide into the atmosphere might filter out sunlight and contribute to the cooling of patches of earth, the chemical also results in acid rain and the acidification of lakes, streams, forests, and croplands. Acid rain also causes the erosion and decay of buildings, bridges, painted surfaces, statues, and sculptures. Environmental Protection Act scientists also warned that exposure to sulphur raining down on humans could bring about such deleterious health conditions as neurological and behavioral changes, disturbance of blood circulation, heart damage, stomach and gastrointestinal disorders, damage to liver and kidney functions, reproductive failures, and damage to the immune system.

Even those scientists who in the beginning were enthusiastic about their experiments with chemtrails have begun to express concern that acid rain and increased weather pattern disruptions could also trigger droughts, famines, and ozone depletion, thereby defeating the purpose of dispersing chemtrails. Secretive attempts to bioengineer the natural cycles of the planet were beginning to be reassessed as outlandish and dangerous.

On November 29, 2011, a 300-member group in Mohave Country, Arizona, calling itself the “Chemtrail Geo-Engineering Lawsuit,” began actively testing individuals who have suffered heavy metal toxicity in their blood and hair follicles. The group claims that a federal geo-engineering program has been using jet planes to spray a solution of barium, aluminum strontium, and other elements into the skies above the United States in an effort to reflect sunlight and cool the planet.

Al DiCicco, of Golden Valley, Arizona, who spearheaded the group, said that they found a woman in Bullhead City who showed levels of barium in her blood that were 28 times normal levels. DiCicco accused the federal and state governments and environmental agencies of being unwilling to properly investigate the geo-engineering projects being conducted. DiCicco’s group plans to seek a law firm that will represent their claims in a class-action lawsuit.

DiCicco said that he was in contact with people all over the world who were concerned about the reality of geo-engineering and the harm being done to humans, animals, plants, and food production. DiCicco also stated that the group had established contact with filmmaker Michael J. Murphy, whose film What in the World Are They Spraying? examines the phenomenon of chemtrails.