[kən′trōl ‚chärt]
(industrial engineering)
A statistical tool used to detect excessive process variability due to specific assignable causes that can be corrected. It serves to determine whether a process is in a state of statistical control, that is, the extent of variation of the output of the process does not exceed that which is expected based on the natural statistical variability of the process.
McGraw-Hill Dictionary of Scientific & Technical Terms, 6E, Copyright © 2003 by The McGraw-Hill Companies, Inc.

Every process has some inherent variability due to random factors over which there is no control and which cannot be eliminated economically. For instance, in a metal fabrication process random factors may include the distribution of impurities and structural faults among the metal molecules, vibrations of the fabrication equipment, fluctuations in the power supply that affect the speed and torque of the equipment, and variations in the operator performance from one cycle to the next. The inherent variability of the process is the aggregate result of many individual causes, each having a small impact.

The control chart technique is applicable to processes that produce a stream of discrete output units. Control charts are designed to detect excessive variability due to specific assignable causes that can be corrected. Assignable causes result in relatively large variations, and they usually can be identified and economically removed. Examples of assignable causes of variations that may occur in the example of metal fabrication include a substandard batch of raw material, a machine malfunction, and an untrained or poorly motivated operator.

A control chart is a two-dimensional plot of the evolution of the process over time. The horizontal dimension represents time, with samples displayed in chronological order, such that the earliest sample taken appears on the left and each newly acquired sample is plotted to the right. The vertical dimension represents the value of the sample statistic, which might be the sample mean, range, or standard deviation in the case of measurement by variables, or in the case of measurement by attributes, the number of nonconforming units, the fraction nonconforming, the number of nonconformities, or the average number of nonconformities per unit.

Typically a control chart includes three parallel horizontal lines (see illustration): a center line and two control limits. The center line (CL) intersects the vertical dimension at a value that represents the level of the process under stable conditions (natural variability only). The process level might be based on a given standard or, if no standard is available, on the current level of the process calculated as the average of an initial set of samples. The two lines above and below the center-line are called the upper control limit (UCL) and lower control limit (LCL) respectively, and they both denote the normal range of variation for the sample statistic. The control limits intersect the vertical axis such that if only the natural variability of the process is present, then the probability of a sample point falling outside the control limits and causing a false alarm is very small. Typically, control limits are located at three standard deviations from the center line on both sides. This results in a probability of a false alarm being equal to 0.0027. 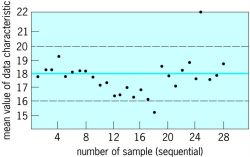 The principle of operation of control charts is rather simple and consists of five general steps:

The main benefit of control charts is to provide a visual means to identify conditions where the process level or variation has changed due to an assignable cause and consequently is no longer in a state of statistical control. The visual patterns that indicate either the out-of-control state or some other condition that requires attention are known as outliers, runs of points, low variability, trends, cycles, and mixtures. See Control systems, Quality control

Feedback
Flashcards & Bookmarks ?
Please log in or register to use Flashcards and Bookmarks. You can also log in with
Flashcards ?
My bookmarks ?
+ Add current page to bookmarks
Mentioned in ?
References in periodicals archive ?
Laney-modified attribute control chart of disintegration.
Application of Statistical Quality Control Tools for Monitoring of Pharmaceutical Product Properties
New Delhi: Good news for train passengers: the Indian Railways has linked its locomotives via ISRO satellites, making it easy to track trains and automatically feed the control charts about the trains arrival and departure, officials said.
Indian Railways links locomotives via ISRO satellites to automatically feed train status
Through the use of control charts, it is possible to rapidly identify changes in strategic points of the process.
Quality monitoring of soybean seed tests using Statistical Process Control/Monitoramento da qualidade em testes de semente de soja utilizando Controle Estatistico de Processo
A control chart (Shewhart chart) provides more information and is more sensitive than a run chart.
Statistical Process Control
The EWMA control chart belongs to the statistical techniques for process control, like the Shwehart and the Cumulative sum (CUSUM) charts.
Utilization of Statistical Control Charts for DoS Network Intrusion Detection
This statistic is plotted on the desired control chart. If this statistic falls within the control limits of the control chart, the process will continue its operation without any interruption.
Integration of the Decisions Associated with Maintenance Management and Process Control for a Series Production System
The performance of a control chart is crucial in determining the appropriate control chart to be implemented in a process.
Performance of Synthetic Double Sampling Chart with Estimated Parameters Based on Expected Average Run Length
For evaluation of the devised control charts determining criteria are valid, based on which we can ascertain whether the process is stable or unstable.
Identification of Special Causes
The exact form of application of control chart measures to a qualitative assay would depend on the particulars of the assay, but these examples should help the reader to appreciate that it is both possible and useful in this context as well.
Applications of control charts in the molecular lab
Depending on the number of points and their location in one of the zones of the control chart, seven criteria are established.
THE STABILITY MONITORING OF THE MANUFACTURING PROCESS OF ELECTRICAL INSULATING SYSTEMS OF TRACTION ELECTRIC MACHINES
Due to its importance in the context of process improvement, many studies have investigated control chart pattern (CCP) recognition for industrial processes.
Applying Two-Stage Neural Network Based Classifiers to the Identification of Mixture Control Chart Patterns for an SPC-EPC Process