(in Russian, preobrazovatel’-naia tekhnikd), the branch of electrical engineering concerned with the development of methods and equipment for the conversion of electrical energy. The term also denotes the set of the corresponding conversion devices.

Conversion devices are divided into rotary and static (electromagnetic and rectifier) types, depending on the basic elements of their power circuits. Rotary conversion devices include transformers and electromechanical frequency changers. Transformers are used in AC circuits when it is necessary to increase or decrease the voltage, to match the output of one system with the input of another, or to provide DC decoupling between electric circuits. Rotary converters, chiefly motor-generator units, are used mostly in self-contained electric power systems and in some industrial electric drives. Electromagnetic converters are seldom used, and then mostly as frequency dividers and multipliers. The basic element of a rectifier conversion device (RCD) is an electric valve rectifier. Because valve rectifiers have a small time lag, high efficiency, good service characteristics, low mass, and small size, wide use is made of them. Electronic (vacuum-tube) rectifiers are used in low- and medium-power high-voltage RCD’s. Ionic (gas-discharge and mercury-arc) rectifiers are used in RCD’s where the loading varies abruptly, in pulsed RCD’s, and in special types. Semiconductor rectifiers include transistors, semiconductor diodes, and thyristors. Because of their compactness, instantaneous readiness for service, high efficiency, simplicity of control, and long service life, they almost completely supplanted other rectifiers in RCD’s for mass applications by the mid 1970’s. In low-voltage RCD’s of low and medium power—that is, approximately 102 to 103 watts (W)—transistors operating in the switching mode are used; in high-power RCD’s (~ 105-108 W), semiconductor power diodes and thyristors are used. In addition to rectifiers with their cooling arrangements, an RCD has transformers, safety devices for overcurrents and voltage surges, rectifier control systems, rate-of-rise limiters for the voltage and current in the power circuits, switching devices, and ripple filters. 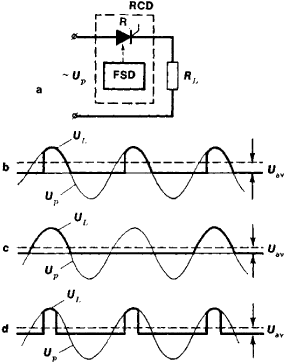 a control signal when suitable potentials are present on its power electrodes. It is shifted into the low-conductivity state (turned off) either as a result of lowered voltage from the power source (in an RCD with spontaneous switching) or of supplementary action by a switching device (in an RCD with forced switching).

The circuit of a very simple RCD—a rectifier—is shown in Figure 1,a. Phase control involves changing the moment when the controlled rectifier, which is connected in series with the load, is turned on; the average value of the rectified voltage applied to the load can thereby be varied (Figure 1,b). The average value of the rectified voltage can also be varied through pulse control, which involves changing the rate at which the control pulses are supplied (Figure 1,c). In an RCD with spontaneous switching, the rectifier is turned off when the current flowing through it is reduced to zero. In an RCD with forced switching, the rectifier can be turned off by the switching device at any moment; the curve of the variation in the voltage on the load is shown in Figure 1,d. This method of controlling the operating mode of the rectifier permits an increased power factor at the input of the RCD as compared to phase control. A ripple filter is generally used at the output of an RCD to reduce the pulsations of the rectified voltage. For this purpose, several RCD’s are used in parallel and are supplied with alternating voltages that are shifted in phase relative to one another.

In an RCD for frequency conversion (Figure 2,a), control pulses are supplied alternately to rectifiers R1 and R2 for the positive half-wave of the load current and to R3 and R4 for the negative half-wave of the load current at a frequency lower than the frequency of the power line in order to obtain (with spontaneous switching) the voltage that is shown in an idealized form in Figure 2,b. In an RCD with forced switching it is possible to obtain an alternating voltage whose frequency can be higher than that of the power line (Figure 2,c) and is limited only by the

Figure 2. (a) Circuit of a semiconductor rectifier frequency changer, (b) and (c) voltage diagrams: (T1) period of the power-line voltage, (T2) and (T) periods of the voltage on the load; the other symbols are as in Figure 1

Figure 3. (a) Circuit of a semiconductor rectifier DC regulator, (b) and (c) voltage diagrams: (T) repetition interval of the control pulses for turning on the rectifier, (t) duration of the rectifier’s on state; the other symbols are as in Figure 1

dynamic properties of the rectifiers. To change the average value of the output voltage in this case, either phase or. pulse control is used.

If an RCD is connected in a DC circuit and the duration of the on and off states of the power rectifier is varied through forced switching (Figure 3,a), the average voltage on the load can be varied by pulse-width (Figure 3,b) or pulse-frequency (Figure 3,c) regulation. Inversion, or the conversion of direct current into alternating current, can be effected by connecting two RCD’s together.