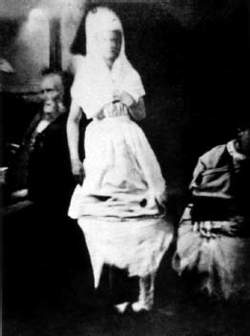 The materialized spirit of Katie King, who appeared at the séances of medium Florence Cook. Courtesy Fortean Picture Library.

Florence Cook saw spirits and heard their voices as a child, but she was told that it was all her imagination. At a tea party when she was fifteen, someone suggested they try table turning. The table responded vigorously and, in addition, Cook was levitated. This led to her and her mother sitting at home and trying to contact spirits. Cook became very effective at automatic writing. In one message done in “mirror writing,” (where the words are written backward, as though seen in a mirror) she was told to go to a certain book store and ask about the Dalston Society. She did so and this led to her meeting the editor of The Spiritualist magazine. Much later, after she had become a renowned materialization medium, Sir William Crookes, President of the Royal Society, wrote three letters to The Spiritualist championing Cook’s abilities and hitting out at her critics.

After attending Dalston Society materialization séances given by Frank Herne and Charles Williams, Cook gave some sittings of her own. This gave her a somewhat sensational debut as a medium. While in trance, she was levitated above the heads of the sitters and had her clothes stripped off her and then replaced. This proved embarrassing to Florence’s mother, and the young girl was thenceforth allowed only to preside in the circle at home, with family members and the maid.

The personality who came through most strongly, and remained with her for three years, was Katie King. King was supposedly the daughter of John King, otherwise known as the buccaneer Henry Owen Morgan. John King was one of the characters that made frequent appearances at the séances of Herne and Williams. Katie King first appeared in April 1872, when Cook was sixteen years old. At first, only a face materialized, but as Cook became more proficient, an entire figure would manifest from the cabinet. Eventually the spirit allowed photographs to be taken. Cook and King looked remarkably similar in facial features though it was said that the two were different in stature and personality. Additionally, Cook’s ears were pierced for earrings while King’s were not. The similarity of looks, however, led many to suppose that Cook was doubling as the supposed spirit. Yet repeatedly it was verified that the medium, dressed in a black velvet gown, was seated in the cabinet—usually tied to the chair—while the spirit was dressed in white and, on occasion, seen at the same time. Eventually Sir William Crookes, physicist and President of the Royal Society, began an intensive investigation of the medium. In 1874, he published a report of a long series of experiments conducted in the Cook home and in his own laboratory. It aroused a storm of ridicule and sarcasm, including charges that Crookes had become enamored of the young medium and that she had become his mistress. The charges were never proven.

Crookes was sometimes able to hold King in his arms, to ascertain that the figure was a fully materialized woman. He was also sometimes allowed into the cabinet to see Cook while the King figure was still outside. In one instance both Cook and King were together in the cabinet with Crookes. In fact he witnessed a highly emotional, tearful farewell between the two when King finally prepared to leave the medium. Her place was later taken by another entity named Marie.

Many others also examined Florence Cook, including the novelist Florence Marryat (Mrs. Ross-Church), who saw both Cook and King together at the same time. At one séance Marryat was also tied to Cook with a length of rope, inside the cabinet, so that she could be with the medium while Katie King was appearing outside.

In 1874, Florence Cook married Elgie Corner and gave up public mediumship for some time. She did, however, accept an invitation to sit under test conditions for the Sphinx Society in Berlin in 1899. Marie materialized there and some astounding phenomena were produced.