a tall hollow structure in which steam is condensed or water that is used as a coolant in some industrial process is allowed to cool for reuse by trickling down a surface
Collins Discovery Encyclopedia, 1st edition © HarperCollins Publishers 2005

A structure; usually located on the roof of a building, over which water is circulated so as to cool it by evaporation.Device that dissipates the heat from water-cooled systems by spraying the water through streams of rapidly moving air. Cooling towers can be substantial water users and, as such, present an opportunity for water conservation.
Illustrated Dictionary of Architecture Copyright © 2012, 2002, 1998 by The McGraw-Hill Companies, Inc. All rights reserved
The following article is from The Great Soviet Encyclopedia (1979). It might be outdated or ideologically biased.

a device for cooling water with atmospheric air. Modern cooling towers are used primarily in industrial circulating water systems for lowering the temperature of water carrying off heat from heat exchangers and compressors. The cooling takes place mainly through the evaporation of some of the water that flows from the sprinkler in the form of films or drops under the force of gravity (the evaporation of I percent of the water lowers its temperature by approximately 6° C).

Cooling towers are classified according to the kind of sprinkler as film, dropping, or spray types and according to the air-supply system as fan, tower (in which an air draft is created by means of a high exhaust tower), or open (or atmospheric) towers, which utilize wind power and, in part, natural convection for the passage of air through the sprinkler. Fan cooling towers may be of the sectional or separate free-standing type. This kind of tower provides more thorough and stable cooling of the water and permits greater specific heat loads than the tower and dropping types, but it consumes additional electric power.

The capacity of a cooling tower is characterized by the density of sprinkling—the specific flow rate of the cooled water per square meter of the sprinkling area. The type, dimensions, and basic components of cooling towers are determined during the design stage by technical and economic considerations, depending on the amount and temperature of the water to be cooled and the parameters of the atmospheric air.

A tower- or building-like device in which atmospheric air (the heat receiver) circulates in direct or indirect contact with warmer water (the heat source) and the water is thereby cooled (see illustration). A cooling tower may serve as the heat sink in a conventional thermodynamic process, such as refrigeration or steam power generation, or it may be used in any process in which water is used as the vehicle for heat removal, and when it is convenient or desirable to make final heat rejection to atmospheric air. Water, acting as the heat-transfer fluid, gives up heat to atmospheric air, and thus cooled, is recirculated through the system, affording economical operation of the process. 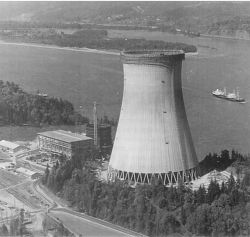 Evaluation of cooling tower performance is based on cooling of a specified quantity of water through a given range and to a specified temperature approach to the wet-bulb or dry-bulb temperature for which the tower is designed. Because exact design conditions are rarely experienced in operation, estimated performance curves are frequently prepared for a specific installation, and provide a means for comparing the measured performance with design conditions. 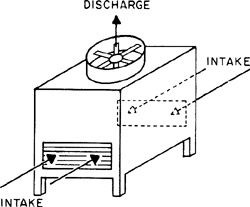 cooling tower of the induced-draft, propeller type
A structure, usually on the roof of a building, over which water is circulated, so as to cool it evaporatively by contact with air.
McGraw-Hill Dictionary of Architecture and Construction. Copyright © 2003 by McGraw-Hill Companies, Inc.