[kō′ȯrd·ən·əts]
(mapping)
Linear or angular quantities which designate the position that a point occupies in a given reference frame or system.
A general term to designate the particular kind of reference frame or system, such as plane rectangular coordinates or spherical coordinates.
(mathematics)
A set of numbers which locate a point in space.
McGraw-Hill Dictionary of Scientific & Technical Terms, 6E, Copyright © 2003 by The McGraw-Hill Companies, Inc.
The following article is from The Great Soviet Encyclopedia (1979). It might be outdated or ideologically biased.

Other types of coordinates are also used in geodesy. With the development of space geodesy the rectangular geodetic coordinates X, y, and Z, whose origin O coincides with the center of the ellipsoid and whose axis Z is directed along the ellipsoid’s lesser axis, have become very important. The transition from B, L, and H to X, Y, and Z is made by means of fairly simple formulas.

numbers that determine the position of a point in the plane, on a surface, or in space. Astronomical and geographical (spherical) coordinates—latitude and longitude— which locate a point on the celestial sphere or on the surface of the earth, were the first types of coordinates to be systematically used. In the 14th century the French mathematician N. Oresme used coordinates in the plane to construct graphs, using the terms longitude and latitude for what we now call abscissa and ordinate.

Coordinates were more systematically used in problems of plane geometry in the 17th century. The French scientist R. Descartes is credited with elucidating the full significance of the method of coordinates, which has made it possible to trans-late geometric problems systematically into the language of mathematical analysis and, conversely, to interpret the facts of analysis geometrically.

not lying on the same line and issuing from O. The position of a point P is determined (in the chosen coordinate system) by two coordinates, the abscissa

In the particular case when the vectors

are perpendicular and have the same length, we speak of rectangular coordinates. Such coordinates are the most frequently used. If the angle between

The polar coordinates of a point in the plane are obtained by selecting a point O (the pole), a ray ON issuing from it (see Figure 2), and a unit of measure for length. The distance p = OP and the angle ø = ≮ NOP serve as the coordinates of the point P. In order to associate to every point P in the plane a pair of numbers (p, ø), it is sufficient to consider values of p and ø subject to the inequalities 0 ≤ p < ∞ and 0 ≤ ø < 2π. With the exception of the point O, for which p = 0 and the angle ø is not defined, the correspondence between the points P different from O and the pairs (p, ø), subject to the indicated conditions, is one-to-one.

Among other specialized coordinate systems in the plane, elliptic coordinates should be noted.

In the case of affine coordinates, the lines x = const form a pencil of lines that are parallel to the Oy axis, while the lines y — const form another pencil of lines that are parallel to the Ox axis. One line of the first pencil (x — x0) and one line from the second pencil (y — y0) pass through every point P (x0, y0) in the plane. In the case of polar coordinates, the curves p = const are circles and the curves ø = const are rays issuing from the origin O. Exactly one curve of each family passes through every point P different from O. The numbers po and ø associated with these two curves are the coordinates of the point P. More generally, we may consider two functions u(P) and υ(P) of a point in a region G of the plane, such that every curve u(P) = const intersects every curve υ(P) = const in just one point of G. Then the numbers u(P) and υ(P) uniquely determine the position of the point P in (7, that is, they are the coordinates of P. The curves determined by the equations u = const and υ = const are called coordinate curves.

Homogeneous coordinates in the plane. A Euclidean plane supplemented with infinitely distant elements can be considered from the projective standpoint as a closed surface on which the infinitely distant points do not play any special role. It is impossible to introduce coordinates in the entire projective plane that would characterize the position of a point by a number pair (u, υ) with preservation of the one-to-one nature and continuity of the correspondence. Homogeneous coordinates are used in-stead. In this case, each point is made to correspond not to a pair but to a triple of numbers (x1, X2, x3); moreover, the same point corresponds to two triples (x1 x2, x3) and (x1’, x2’ x3’) if and only if the triples are proportional, that is, there exists a factor A such that

These coordinate systems play an important role in geometry.

Coordinates of a point in space. Affine, or general Cartesian, coordinates in three-dimensional space are introduced by specifying a point O and three vectors ex =

not all lying in the same plane. In order to obtain the x, y, z coordinates of a point P, the vector OP is represented in the form

In applications to mechanics, mathematical physics, and other fields, certain special curvilinear coordinate systems, namely, spherical coordinates and cylindrical coordinates, are the most widely used.

Coordinates of a line, plane, and so forth. The principle of duality (seeDUALITY, PRINCIPLE OF), which establishes the equivalence of points and lines in the geometry of two dimensions and the equivalence of points and planes in the geometry of three dimensions, suggests the notion of determining the positions of lines and planes by means of special coordinates. In fact, if the equation of a line (not passing through the origin) in rectangular coordinates is reduced to the form ux + νy + 1 =0, then the position of the line is completely determined by the numbers u and ν (u = — 1/a and ν = —1/b, where a and b are the intercepts of the line on the axes). We may take (u, ν) to be the coordinates (known as the tangential coordinates) of the straight line. The symmetrical nature of the equation ux + νy + 1= 0 with respect to the pairs (x, y) and (u, ν) is an analytic expression of the principle of duality. The use of coordinates in n-dimensional space is entirely analogous to the cases n = 2 (plane or surface) and n = 3 (three-dimensional space). 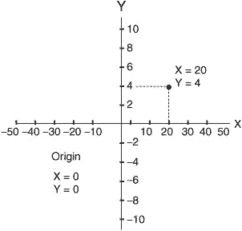 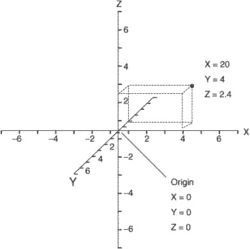 Three-dimensional cartesian system.
A system in which two magnitudes are used to define a position. Usually expressed in degrees/minutes/seconds of latitude and longitude. These may be interrelated linear or angular measures, by which the position of a point may be defined with reference to a fixed axis, a place, or a direction. Coordinates may also be three-dimensional as in the Cartesian system.
An Illustrated Dictionary of Aviation Copyright © 2005 by The McGraw-Hill Companies, Inc. All rights reserved

Feedback
Flashcards & Bookmarks ?
Please log in or register to use Flashcards and Bookmarks. You can also log in with
Flashcards ?
My bookmarks ?
+ Add current page to bookmarks
Mentioned in ?
References in periodicals archive ?
(1), the auxiliary coordinates and their derivatives should be eliminated by using the Eqs.
Computer-aided generation of equations and structural diagrams for simulation of linear stationary mechanical dynamic systems/Lygciu ir strukturiniu schemu kompiuterizuotas sudarymas tiesinems stacionarioms mechaninems dinaminems sistemos modeliuoti
Fallacy 3 is an attempt to find coordinates that will show the particle can reach and cross the critical radius.
Five fallacies used to link black holes to Einstein's relativistic space-time
It is Equation 3 that indicates the certain function relation between the bed coordinates and the diagram layer coordinates.
A Formula for Calculating Deviation of Computed Tomography-Guided Puncture Point
Coordinates in the default camera coordinate system (units: pixels) are shown in Table 1.
Base Detection Research of Drilling Robot System by Using Visual Inspection
Based on the coordinates of six spatial feature points and the orthogonal constraint condition of the rotation matrices, the rotation matrix and the translation matrix of the two-theodolite system are obtained as follows:
Global Measurement Method for Large-Scale Components Based on a Multiple Field of View Combination
The Cooper's iterative method is used to calculate the optimal coordinates for distribution warehouse allocation so that the city which is the closest to that coordinates becomes a good place for allocating a distribution warehouse.
Allocation of distribution warehouse as one option for transport costs reduction
The post processed coordinates of YLDZ station were entered into the Ashtech web server software to be used in real-time measurements in order to determine the coordinates of benchmark points in the next stage.
Performance of single base RTK GNSS method versus network RTK/ Desempeno de un Metodo de Navegacion Cinetica Satelital en Tiempo Real (RTK) de una Sola Base en Comparacion de un Sistema RTK
The First Vice Prime Minister will coordinate interethnic relations, reforms of administrative and territorial system, activities of local state administrations, local government bodies.
PM Otorbayev approves responsibilities of Vice PMs, government agencies under their supervision
Since the initial virtual supervisors mobile robot coordinates are known, during the procedure of supervisor's coordinate conversion, the chosen optimization method, it is easy to find and the actual coordinates of the robot, but it is unclear how much time will have to spend for this solution.
Detecting the mobile robot position using the profile of known environment
In some mines of the OKR, Ott's system of coordinates was still in use in 1970s; even today, its practical value consists in the ability to trace and dispose of old mine outlets or test and verify pits surveyed with the use of this system.
Application of OTT's mine coordinate system in the past and in present day
Improved APIT algorithm [6], which bases on triangle-gravity-center calculation and grid scanning, considers the triangle-gravity-center as the coordinates of unknown nodes.
A new range-free localization algorithm in wireless sensor networks based on improved genetic algorithm by control on adrenaline levels