[kȯr·ē′ō·ləs ik‚sel·ə′rā·shən]
(mechanics)
An acceleration which, when added to the acceleration of an object relative to a rotating coordinate system and to its centripetal acceleration, gives the acceleration of the object relative to a fixed coordinate system.
A vector which is equal in magnitude and opposite in direction to that of the first definition.
McGraw-Hill Dictionary of Scientific & Technical Terms, 6E, Copyright © 2003 by The McGraw-Hill Companies, Inc.
The following article is from The Great Soviet Encyclopedia (1979). It might be outdated or ideologically biased.

[named after the French scientist G. Coriolis], a rotational acceleration, a part of the total acceleration of a point that appears in the so-called composite motion, when the transferred motion, that is, the motion of a moving frame of reference, is not translational. Coriolis acceleration 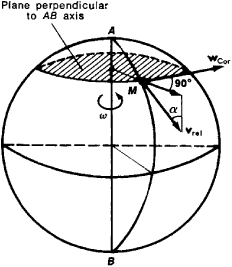 where ωtrans is the angular velocity of rotation of the moving frame of reference about some axis AB and a is the angle between νrel and the axis AB. As a vector, the Coriolis acceleration is given by

The direction of the Coriolis acceleration can be obtained by projecting the vector νrel on a plane perpendicular to the AB axis and rotating this projection by 90° in the direction of the transferred motion (see Figure 1, in which the velocity of the point M along the meridian AMB of a sphere is νrel, while the rotational velocity of the sphere about the AB axis is ω).

The concept of Coriolis acceleration is used in solving various problems in kinematics and dynamics (see). 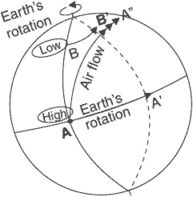 Airflow moving from high pressure to low pressure in the Northern Hemisphere is deflected to the right due to Coriolis or earth's rotation
An acceleration of a moving object, such as an airplane, to the right or left caused by Coriolis force. Coriolis force is apparent force experienced by a body moving relative to the rotating earth. The wind blowing from the poles toward the equator turns to the right in the Northern Hemisphere and to the left in the Southern Hemisphere because of this Coriolis force, or Coriolis effect. Coriolis acceleration is experienced in all motion parallel to local surfaces, except that on the equator.
An Illustrated Dictionary of Aviation Copyright © 2005 by The McGraw-Hill Companies, Inc. All rights reserved