Corman, Roger William, 1926-, American film director, screenwriter, and producer, b. Detroit, Mi., Stanford Univ. (B.S., 1947). Corman studied industrial engineering in college, but then pursued work in the movie industry, working his way up to being a script reader at 20th Century Fox. His first screenplay was for the film Highway Dragnet (1953), which he sold to an independent producer, and he made his debut as a director with 1955’s Five Guns West, working for an independent company later known as American International Pictures (AIP). It became a leading producer of so-called “B movies” in the ’50s-‘60s, with Corman serving as its leading director primarily of horror films. He founded the production company Filmgroup in 1959. In 1960, he directed the horror-comedy hybrid Little Shop of Horrors for AIP, which later inspired a off-Broadway musical and film. In the 1960s, he became known for his low-budget horror films, often featuring actor Vincent Price. Also during this period, he began mentoring young directors just beginning their careers, producing early films by Francis Ford Coppola and Martin Scorsese, among many others. His film The Wild Angels (1966), starring Peter Fonda, is said to be the first biker movie, and may have inspired Fonda’s own Easy Rider (1969). He also made 1967’s The Trip, which was written by Jack Nicholson and starred Fonda and Dennis Hopper. In 1970, Corman founded New World Pictures to specialize in low-budget films and to distribute foreign films. Corman continued to produce comedies and horror films in the ’70s-’80s, directing his last feature, Frankenstein Unbound, in 1990. In 1995, he produced a 15-part horror/action film series for cable network Showtime and founded a short-lived comic book imprint (1995-96). In recent decades, he has primarily produced films for the Sci-Fi channel. His early films are particularly celebrated in Europe, where he has won several awards for his work, and he was honored with the David O. Selznick Award from the Producers Guild of America (2006) and an Honorary Academy Award (2010), among other awards, at home. 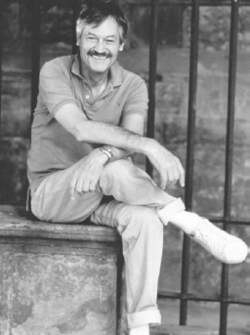 Roger William Corman, independent film director and producer, was born April 5, 1926, in Detroit, Michigan. Following his service in the U.S. Navy during World War II, he earned an engineering degree at Stanford University. His career in motion pictures began as a messenger boy at 20th Century-Fox in the early 1950s. He worked his way up from screenwriter to director and producer. His first directing job was on Guns West, a western for American International Pictures, for whom he would direct and produce for almost two decades. Over the next four decades Corman would direct and/or produce over 100 films. He left AIP to found his own New World Pictures in 1970. At New World Pictures he developed specialized sub-genre films that were distinctive for their formulaic amount of violence, nudity, humor, and social commentary incorporated into each plot. In 1985 Corman established a new distribution company, Concorde Pictures. He currently heads Concorde and New Horizons Home Video.

Corman’s films seem to have treated every subject imaginable. They have become known for their quick production on a low budget. At the same time Corman is applauded for the opportunity he gave many young actors and the relative freedom to experiment he gave new directors. Such diverse people as Jack Nicholson and Francis Ford Coppola started with Corman. As might be expected, among his more than 100 movies, Corman produced his share of vampire movies, including some of the more important films of the genre.

Corman’s first vampire film, which he both directed and produced, was also possibly the first science fiction vampire movie. Not of this Earth (1957) had humanoid aliens checking out earthlings as possible sources for blood for their race. In Little Shop of Horrors (1960), later a Broadway musical and a 1980s movie from Warner Bros., the plant in the quaint florist shop was the vampire.

In 1966 Corman acquired footage from a Russian film, Niebo Zowiet, around which Curtis Harrington wrote a script. A week of shooting and a new sci-fi vampire, the Queen of Blood, emerged. Still an interesting picture, it featured Forrest J. Ackerman in a brief role and started assistant director Stephanie Rothman on her directing career. Rothman then directed Corman’s next vampire production, The Velvet Vampire (1971), which featured a female vampire wreaking damage on the unsuspecting until she encounters a groups of savvy hippies.

Corman retired from directing in 1971, but continued to oversee production at his company. Through the remainder of the decade at New World, Corman did not pursue the vampire, there being plenty of other interesting themes to explore. However, through the 1980s New World and its successor Concorde/New Horizons were responsible for a series of vampire movies, including: Saturday the 14th (1981), Hysterical (1982), Transylvania 6–5000 (1985), Vamp (1986), Saturday the 14th Strikes Back (1987), Not of This Earth (1987), and Transylvania Twist (1989).

Then in 1988, with the noticeable increase in interest in vampires, Corman’s Concorde initiated a new effort titled Dance of the Damned. The story centered on a stripper with a suicidal impulse who unknowingly took a vampire home. He wanted to know about the experiences he had been denied. The idea worked well enough that it was remade in 1992 as To Sleep with a Vampire. The relative success of these two movies led immediately to a third film that combined the Dracula myth with the new contemporary vampire popularized by the Anne Rice novels. The result, Dracula Rising, had a young female art historian encountering Dracula while working in Transylvania. As suggested by Dan Curtis‘s Dracula (1973), Dracula saw her as the image of his lost love of four centuries earlier. Dracula had originally become a vampire when his love had been executed as a witch. When he finally found her again, his vampiric condition kept him from her.

In 1990 Corman authored his autobiography, which he appropriately titled How I Made a Hundred Movies in Hollywood and Never Lost a Dime. After 40 years his companies continue to make movies and given the perspective of four decades, his accomplishments are bringing him some of the recognition he had been denied through most of his career. In 1992 he was awarded the 30th Annual Career Award by The Dracula Society.