[′kȯr·nər ri′flek·tər]
(electromagnetism)
An antenna consisting of two conducting surfaces intersecting at an angle that is usually 90°, with a dipole or other antenna located on the bisector of the angle.
(optics)
A reflector which returns a laser beam in the direction of its source, consisting of perpendicular reflecting surfaces; used to make precise determinations of distances in surveying.
McGraw-Hill Dictionary of Scientific & Technical Terms, 6E, Copyright © 2003 by The McGraw-Hill Companies, Inc.
The following article is from The Great Soviet Encyclopedia (1979). It might be outdated or ideologically biased.

an artificial ranging target with a large target cross section that is weakly dependent on the angle of incidence of electromagnetic waves. The target cross section Seff is the area of a hypothetical flat target having the same reflection coefficient in a specified direction as does the given target. Corner reflectors are used in radar and in optical detection and ranging.

Radar corner reflectors consist of three mutually perpendicular metallic surfaces, usually of rectangular or triangular shape. A ray that is incident on one of the surfaces at a small angle θ to the bisector of the trihedral angle is returned in the direction of the radiation source after triple reflection. For rays that arrive within a substantial solid angle, a corner reflector is similar to a mirror. The value of Seff is a function of the angle of incidence θ and varies in proportion to cos θ. The highest value of Seff is achieved when the incident ray coincides with the bisector of the trihedral angle. For a corner reflector with square faces the maximum target cross section Seff max = 12πa4/λ2, and for one with triangular faces Seff = 4πa4/3λ2, where a is the side of the square or the leg of the right triangle and λ is the wavelength. For example, when a = 1 m and λ = 1.5 m, Seff = 17 m2, which corresponds to the effective reflecting surface of a small aircraft, such as a fighter; when α = 1 m and λ = 10 cm, Seff = 3.77 × 103 m2, which is equivalent to the effective reflecting surface of a large oceangoing vessel. 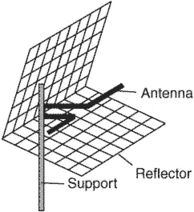 i. A passive ECM (electronic countermeasure) device, normally consisting of three metallic surfaces or screens perpendicular to one another. It is designed to act as a radar target or marker by producing a very strong radar echo. The returned echo by the reflector stands out and thus confuses the radar operator.
ii. A device for producing antenna gain at very high frequencies and above. It consists of two flat metal sheets or screens, which are placed behind the radiating element of the antenna to produce forward gain. The gain is the same for reception as for transmission at the same frequency. Corner-reflector antennae are often used for reception of television broadcast signals in the UHF (ultrahigh frequency) band.
iii. In radar interpretation, an object that, by means of multiple reflections from smooth surfaces, produces a radar return of greater magnitude than might be expected from the physical size of the object.
An Illustrated Dictionary of Aviation Copyright © 2005 by The McGraw-Hill Companies, Inc. All rights reserved

Feedback
Flashcards & Bookmarks ?
Please log in or register to use Flashcards and Bookmarks. You can also log in with
Flashcards ?
My bookmarks ?
+ Add current page to bookmarks
Mentioned in ?
References in periodicals archive ?
Introduced into service by mid-2000s, the 150 mm diameter Sealem 15-01/15-02 (1650/1800 mm length) rockets deploy corner reflectors that generate customer-tailored RCS over the duration required by of all tactical engagements (centroid seduction, distraction/seduction and dilution).
Naval soft-kill technologies
Figures 14-16 present reconstructed scenes, where a corner reflector is expected to appear at range 2.25 m, for several range downsampling options (60%, 50%, and 40%).
Performance of 2D compressive sensing on wide-beam through-the-wall imaging
This kind of receiving antenna was used because of its simple design and the possibility of placing it closer to the body than would be possible with a larger corner reflector antenna.
Model for Ray-Based UTD Simulations of the Human Body Shadowing Effect in 5G Wireless Systems
Figure 2(g) is the 3-D imaging result of the corner reflector via matched filtering in top-view, side-view, front-view and 3-D view respectively.
Three-dimensional SAR with fixed transmitter and its scattering explanation
Caption: Figure 7: Angle estimation of the target being interfered with by the corner reflector and active jamming simultaneously.
Adaptive Countering Technique for Angle Deception Based on Dual Polarization Radar Seeker
Considering that the peak of the corner reflector is generally much greater than other terms at position ([R.sub.0], [x.sub.0]), only the "real" response of the corner reflector is taken into account when deriving the correction method, which is
Correction of channel imbalance for MIMO SAR using stepped-frequency chirps
The array composed of two E-shaped elements and a dihedral corner reflector provides measured gains of 6.8 and 12.5 dBi at 2.4 and 5.8 GHz, respectively.
Optically controlled reconfigurable antenna array based on E-shaped elements
Takada, "Analysis of a dihedral corner reflector antenna excited by a probe inside rectangular ring," in Proceedings of the International Symposium on Antennas and Propagation, pp.
Rectangular ring antenna excited by circular disc monopole for WiMAX system
A lunar locator fires a laser pulse at the corner reflectors positioned on the Moon's surface, which return the pulse in the opposite direction with minimal scattering.
High-power lunar locating laser aids satellite navigation