electric power losses during transmission as a result of the formation of a corona discharge. The quantitative regularities of the corona discharge are dictated by its distinguishing features—the characteristic form of the interaction between the ions, created during the discharge, and the electric field at the corona electrode. An example of such an electrode is the conductor in a power line. The charge of the ions moving from the ionization zone to the outer zone has the same polarity as the charge on the conductor displaying the corona. As a result, the field at the conductor is usually weakened until it reaches a certain, practically constant magnitude, the critical strength Ecr. In the remaining regions—the outer zone—the field is correspondingly strengthened. This characteristic of the corona-formation mechanism is the reason for the substantial dependence of both the corona discharge current and the corona losses on the voltage on the conductor.

As long as there is no corona, the strength Econ of the electric field at the surface of the conductor is directly proportional to the conductor voltage U and inversely proportional to the radius r of the conductor. If U is increased gradually, Econ will increase correspondingly until U reaches a critical value Ucr. At this point, Econ is equal to Ecr the field strength at which a corona appears. If the voltage is increased beyond this point, Econ will no longer increase. The intensity of the corona, however, does increase—that is, there is an increase in the flux of ions from the conductor and in the electric charge ρ carried by the ions into each unit volume of the outer zone. The charge ρ increases precisely to the value required to limit the field at the conductor to essentially Ecr, but in accordance with the increased voltage the charge strengthens the field Eoz in the outer zone beyond the ionization zone.

In the strengthened field Eoz the ions’ velocity increases since v is proportional to Eoz. As a result, when U increases, the space charge of the ions and the speed of the motion of this charge also increase. This effect is equivalent to a sharp increase in the corona current density jC = ρv. The total corona current IC accordingly also increases; this current flows from the conductor into the surrounding air. The relationship between IC and jC depends on the configuration and dimensions of the electrodes. Since the product of the corona current and the voltage is equal to the power loss due to corona, the strong dependence of IC on U causes an even stronger dependence on U of power and energy losses. For conductors exhibiting corona, the power losses P are approximately proportional to the product U(U – Ucr), and the energy losses are equal to PT, where T is the duration of the corona discharge.

As to their physical nature, corona losses are mostly thermal. They are due to the accumulation of kinetic energy by the ions in the electric field and the transfer of this energy to the neutral gas molecules by collisions. The velocity of the molecules and the temperature of the gas consequently are increased. An insignificant part of the losses—from a fraction of one percent to a few percent—consists of ionization losses in the gas, chemical reactions in the corona zone (formation of ozone and oxides of nitrogen in the air) and high-frequency radiation in the range from 104 to 107 hertz (corona radio interference).

Corona losses depend on the structure of the electric field and on the space charge of the ions. In the case of AC voltages, a corona burns only during the part of the cycle when the maximum voltage is being approached. During the subsequent lowering of the voltage, the remaining space charge of the ions, which is proportional to the maximum voltage, extinguishes the corona by lowering the field strength at the conductor below Ecr. Even for a short-duration corona, however, the energy losses are considerable because of the bipolarity of the structure of the ion charge in the field. During the corona discharge, the charge produced—for example, the charge of positive ions ρ+—is such that it not only maintains the field at the conductor at a value equal to Ecr but also offsets the field-strengthening effect of the charge ρ- of the ions remaining from the preceding 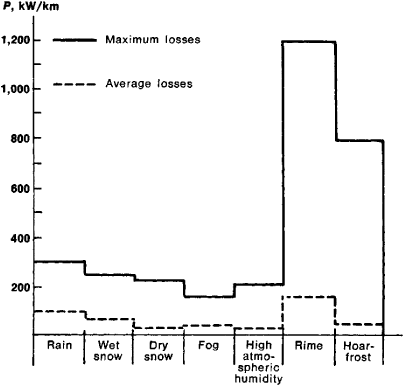 half-period. Other conditions being the same, the corona losses of AC transmission lines are therefore higher than those of DC lines with a continuous corona. This is one of the advantages of DC power lines.

As already stated, the corona losses of transmission lines increases with voltage. The only way to reduce the losses for a given line voltage is to raise Ucr. This can be done by increasing the diameter of the conductors and, to a lesser degree, by increasing the spacing between the conductors. Extra-high-voltage transmission lines—lines at 500 or more kilovolts (kV) —use bundle, or multiple, conductors consisting of several conductors of a comparatively small diameter (2-3 cm) that are spaced 40 to 50 cm apart and are held in place by insulating spacers. With respect to the magnitude of Ucr, such a bundle conductor is equivalent to a single conductor of a very large diameter. Three conductors are used per bundle in a 500-kV line, and 750-kV lines have four conductors in a bundle. Six to eight conductors will probably be required for 1,150-kV lines, and the overall diameter of the bundle may reach 1 to 1.5 m. Corona losses however are only reduced by the use of bundle conductors; they are not completely eliminated.

In practice, corona losses are absent only during periods of fair weather when there is no precipitation on the conductors. When raindrops, snow, hoar-frost, and other forms of precipitation are deposited on a conductor, they form sharp projections on the conductor’s surface and thereby, in effect, reduce the diameter of the conductor. As a result Ucr is lowered by 30 to 50 percent and the conductors begin exhibiting a corona. Figure 1 contains a graph of specific power losses, measured under different weather conditions, for an operating 750-kV transmission line. The maximum losses—1,200 kilowatts per km (kW/km)—are observed when rime is present. For an average annual operating time under voltage of 7,000 to 8,000 hours, the average annual losses for a 500-kV line are about 12 kW/km, and for a 750-kV line they are 37 kWAm. They can be expected to reach 80 kW/km for a 1,150-kV line. For very long transmission lines (500–1,000 km), corona losses are substantial. The elimination of these losses under all weather conditions would require an excessive increase in the cost of the conductors and of the transmission line as a whole. For this reason, the choice of the design and parameters of a line is governed by an engineering and economic comparison between the construction costs of the line and the costs of the power losses. When corona losses are calculated, Ucr for fair-weather conditions is usually chosen to be 10 to 20 percent higher than the operating voltage of the line.

Feedback
Flashcards & Bookmarks ?
Please log in or register to use Flashcards and Bookmarks. You can also log in with
Flashcards ?
My bookmarks ?
+ Add current page to bookmarks
Mentioned in ?
References in periodicals archive ?
This phenomenon causes big electrical losses, called corona losses. The corona discharge occurs around the naked lines so that the voltage distribution has values higher than [U.sub.k] value, which is found from Peek's formula (Equation (9)).
Electrostatic analysis of transmission lines to simulate corona discharge at high voltage