Cosmobiology is a contemporary form of scientific astrology that is especially popular in Europe. Cosmobiology utilizes modern methods of scientific research, such as statistics, analysis, and computer programming. The word cosmobiology was coined by the Austrian physician Dr. Friedrich Feerhow and was later used by the Swiss statistician K. E. Krafft to designate that branch of astrology working on scientific foundations and keyed to the natural sciences. Cosmobiology has, through the work of Reinhold Ebertin, become increasingly well-known within the last 50 years.

Despite the great diagnostic value of cosmobiology in the fields of characterology and psychology, one should not forget that the individual’s natal constellation can only be seen and properly interpreted in connection with his or her life history (medical history, upbringing, the time and circumstances in which he or she lives, religion, manners and morals, environment, etc.).

The cosmogram is the cosmobiological equivalent of horoscope, and designates the notation of a cosmic constellation. The foundation for casting the cosmogram is the zodiac, which the Sun moves through in one year. Each of the signs of the zodiac encompasses 30 smaller divisions called degrees. Accordingly, the whole circle contains 360 degrees.

To locate the positions of the stellar bodies in the zodiac more exactly, 1 degree is divided into 60 minutes (60’) and every minute is again divided into 60 seconds (60”). The position of each stellar body is written down in degrees, minutes, and, sometimes, in seconds. To distinguish subdivisions of degrees from subdivisions of hours, one uses the symbols h (for hour), m (minute), and s (second) when discussing time.

Each tradition and profession develops suitable tools with which to ease and improve its work. The most important aid for cosmobiological investigation is the 90° dial.

Traditionally, the horoscope has been divided into one of several house systems that offer further interpretations for the inquiring astrologer. Cosmobiology does not utilize a house system. Instead, the focus is on planetary influences, which are enhanced so as to dominate the interpretation of a chart.

The cosmogram, composed of two circles, is the basic form used for interpretation in cosmobiology. One circle is the standard 360° circle for the regular planetary distribution; the other is a 90° circle.

The 360° circle is a recognized measuring device for investigation. To simplify the process of investigation, we reduce the 360° circle to a fourth (i.e., the regular 360° circle is quartered and folded into four equal parts to provide a unique structure for discerning the angular distribution of the stellar bodies. The resulting 90° “circle” groups cardinal, fixed, and mutable quadruplicates together, with each quadruplicity occupying 30° of the 90° circle.

Prior to constructing a cosmogram, one must have a chart locating the stellar bodies on a 360° circle. This can be derived from standard chart erection methods, so it is suggested that the astrologer begin by constructing the type of horoscope she or he is accustomed to, then transcribe the planets to the cosmogram in their proper places; this method will prove very helpful in making the transition from traditional astrology to cosmobiology.

Cosmobiology utilizes much smaller orbs in ascertaining aspects than those used in standard methods. An orb of only 1½° on each side is allowed, except in the case of aspects’ personal points (Sun, Moon, medium-coeli (MC), and Ascendant), in which an orb of 50° may be used.

As would be found in a traditional horoscope, the planets are placed in the inner circle of the cosmogram. However, because one is not using a system of any type, the ascendant (ASC) and midheaven (Medium-coeli MC) positions will not be located in the usual places. The ASC and MC are treated in the same fashion as a planet, and are placed according to sign position.

Like traditional astrology, cosmobiology utilizes the Moon’s Node (Dragon’s Head), but in the 90° circle there is no distinction between the North and South Nodes, as they are posited in the same place. (In the 90° circle oppositions are conjunct.) Cosmobiology pays almost no attention to sextiles and trines. The cosmogram shows only conjunctions (0°) semi-squares (45°), squares (90°), sesqui-squares (135°), and oppositions (180°). Trines and sextiles generally signify a harmonious state of affairs. However, they seldom denote concrete events. The hard aspects mentioned above indicate actual events.

The 90° (outer) circle begins with 0° (located at the top of the chart) and ends at the same spot with 90°. Each 30° sector of the 90° circle is occupied by one of the three quadruplicities, and will contain only those stellar bodies that correspond to the zodiacal signs of that particular quadruplicity. All stellar bodies are to be entered in a counterclockwise manner, beginning from point zero (0°).

All symbols should be entered vertical to the center of the circle, so that when the sheet is turned the symbols will always be in an upright position. One should take care to be very precise, as great precision will greatly reduce errors and make the interpretative work easier.

The “individual” points in a birth chart are:

These are known as the “individual” points because they move about one degree in four minutes. With the aid of the dial, these points can be rectified and the precise time of birth confirmed. In the past, the ascendant was usually considered to be the most important individual factor. More recently, the greater importance of the MC has become evident. The ascending degree is the degree of the ecliptic rising on the eastern horizon at the time of birth, the apparent meeting point of ecliptic and horizon. We live and move on the horizontal plane and in a way the individual’s ascendant can be seen as the point of contact with other people and the mutual relationship between the individual and his environment. The environment helps to shape the individual, and the individual leaves his mark upon his surroundings. However, it would seem mistaken to identify character with the ascendant. The ascendant seems to correlate much more with Jung’s use of the term “persona” in its sense of a “mask” in which a person appears and through which a person plays a “part” in the world. The MC, on the other hand, seems to relate to the actual “inner life”—to one’s own “ego”—including one’s inner ambitions and will to make one’s own decisions.

In cosmobiology, not only are the so-called “hard” aspects given more attention, but a unique angular/distance relationship between two stellar bodies is utilized. The relationship is commonly known as the “midpoint.”

The midpoint theory was founded centuries ago. Alfred Witte, the founder of the Hamburg School of Astrology, is credited with the introduction of the midpoint system in modern astrology. Midpoints became the object of intense research by Reinhold Ebertin, and were later incorporated by him into a system that presently dominates the astrological world.

Although midpoints are the major tools of cosmobiological interpretations, they are not the exclusive property of cosmobiology. (Uranian astrologers also use midpoints in conjunction with the 8 Trans-Neptunian planets, Cupido, Hades, Zeus, Kronos, Appolon, Admetus, Vulcanus, and Poseidon.) Midpoints have been shown to make much of traditional interpretation vague and even obsolete.

In exact investigations, one writes the degree numbers below the names of the stellar bodies, in this way:

One can see from this equation that the midpoint is exact within 5’ (minutes of arc).

In the chart below, Moon, Uranus, and the node form a grand trine, i.e., a distance approximately 120° to one another. According to the principle of traditional astrology, one would judge this stellar grouping as a “grand trine” only. But at the same time, there is a direct midpoint as well because Uranus is placed in the center of distance or in the midpoint between Moon and node, written thus:

Precise work requires not only the coordination of a number of degrees with years of life but also calculation of the individual solar arc. The solar arc for a particular year of life denotes the distance between the solar position on the day of birth and the number of days that corresponds to the year of life in question.

This is also expressible in a formula: 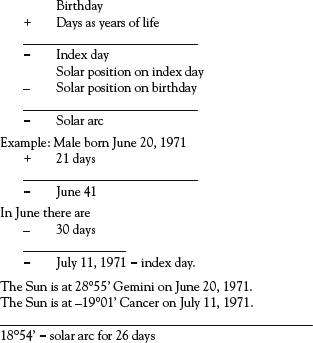 It is very important to consider the points lying opposite as well, because these constitute the semisquares and sesquiquadrates. In times past, these aspects were often ignored, because they are difficult to determine. However, statistics show that these aspects are at least equal in importance to the others. In the cosmogram they are easy to spot.

The word transit means going over, and in cosmobiology, it refers to one planet’s passage over another. Stellar bodies in the cosmogram are considered primarily to be called the radix (or natal) and each of the radical stars is marked by r. The planets in motion are designated “progressing,” and abbreviated pr.

A differentiation must be made between strong and weak transits, between those that can bring about a change in life, and those that merely have a hand in shaping ordinary, everyday life. The slower the planets move, the stronger their influence. Whoever has stood under the influence of the transits of Pluto, Neptune, or Uranus will hardly be able to say he or she has felt nothing. Cosmobiologists also use midpoints for greater precision in calculation and also more exact interpretation, so that after mastering the use of transits, going on to the consideration of midpoints is highly recommendable.

Paying attention to the MC and ASC is very important. When a progressed planet is in the vicinity of the points M (MC) and A (ASC), attention should be paid to when an aspect forms. As already stated, the aspects of the planets are of greater importance than the “signs” and “houses.” The orbs of the aspects are the same as in the natal chart. The closer the orbs, the more precise is the outcome (1½° on each side).

Cosmobiologists work with the 45° geocentric and heliocentric ephemerides and the 45° midpoint ephemerides. Reinhold Ebertin introduced the 45° ephemerides that excited many thousands of astrologers. This method enables one to obtain, within a few minutes of time, a survey on the year to come by writing the positions from the natal chart in the margin and then drawing straight lines through the graphic ephemerides form.

In the graphic ephemeris, the month of the year can be found at the very top, and just below, the periods of 10 years. On the both sides are the divisions into degrees; on the right-hand side this ranges from 1 to 45°, on the left-hand side the 45° with the markings for each individual sign.

By drawing horizontal lines across the page, points of intersection of the various stellar orbits will become evident. Note that the orbits of the slow-moving planets take on a fairly flat form, whereas the fast-moving planets move in an almost vertical plane. In solar motion, the small circles are marked by N for New Moon and V for Full Moon (German voll-full). An E in the circle indicates an eclipse.

Feedback
Flashcards & Bookmarks ?
Please log in or register to use Flashcards and Bookmarks. You can also log in with
Flashcards ?
My bookmarks ?
+ Add current page to bookmarks
Mentioned in ?
References in periodicals archive ?
Clinical cosmobiology: the Lithuanian study, International Journal of Biometeorology 38: 199-204.
On the short-term prognosis of anticyclonic formations in vilnius by the hard cosmic ray flux variations/Trumpalaike anticiklonu formavimosi ties vilniumi prognoze pagal kietosios kosmines spinduliuotes srauto svyravimus
Goetz, Joseph, SJ, who was my professor of the phenomenology of religions at the Gregorian University in Rome, used the term "cosmobiology" to describe this type of religion ("Les Religions des Primitifs" in Bergounious, F.
Dialoguing with the biocosmic aspects of Melanesian religions: a missiological perspective