progesterone (prōjĕsˈtərōnˌ), female sex hormone that induces secretory changes in the lining of the uterus essential for successful implantation of a fertilized egg. A steroid, progesterone is secreted chiefly by the corpus luteum, a group of cells formed in the ovary after the follicle ruptures during the release of the egg cell. If fertilization does not take place, the secretion of progesterone decreases and menstruation occurs. If fertilization does occur, progesterone is secreted during pregnancy by the placenta and acts to prevent spontaneous abortion; the hormone also prepares the mammary glands for milk production. Progesterone is also synthesized from cholesterol in the cortex of the adrenal gland where it is a precursor for the synthesis of other steroids including testosterone. Synthetic compounds with progesteronelike activity have been developed that, along with estrogen, are used in oral contraceptives.
The Columbia Electronic Encyclopedia™ Copyright © 2022, Columbia University Press. Licensed from Columbia University Press. All rights reserved. 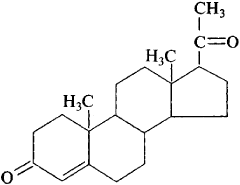 [prō′jes·tə‚rōn]
(biochemistry)
C21H30O2 A steroid hormone produced in the corpus luteum, placenta, testes, and adrenals; plays an important physiological role in the luteal phase of the menstrual cycle and in the maintenance of pregnancy; it is an intermediate in the biosynthesis of androgens, estrogens, and the corticoids.
McGraw-Hill Dictionary of Scientific & Technical Terms, 6E, Copyright © 2003 by The McGraw-Hill Companies, Inc.

a steroid hormone, secreted mainly by the corpus luteum in the ovary, that prepares and maintains the uterus for pregnancy. Formula: C21H30O2
Collins Discovery Encyclopedia, 1st edition © HarperCollins Publishers 2005