(1) The limiting equilibrium state of a two-phase system, in which the properties of both coexisting phases become identical. 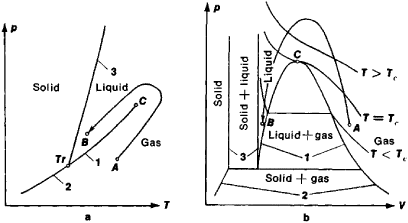 Upon approaching the critical state, the differences in the density, composition, and other properties of the coexisting phases, as well as the heat of phase transition and the interphase surface tension, decrease and become equal to zero at the critical point.

If the phase coexistence curve ends at a critical point, it is possible, in principle, for a substance to pass from one phase to the other, bypassing the region of separated phases (for example, conversion of a gas to a liquid by changing its state along the line AB in Figure 1, a—that is, bypassing the region in which the gas and the liquid exist simultaneously). Condensation of gases may occur only after the gases have been cooled to temperatures below Tc.

In two-component systems, phenomena characteristic of the critical state are observed not only at the liquid-gas equilibrium point but also at critical solubility points, at which the mutual solubility of the components becomes infinite. There are binary liquid systems that have one or two (upper and lower) critical solubility points (Figure 2, a and b). These points are the temperature boundaries of the region in which the two liquids stratify into phases with differing composition. Some gas solutions and solid solutions have an analogous tendency toward stratification at a definite critical temperature. 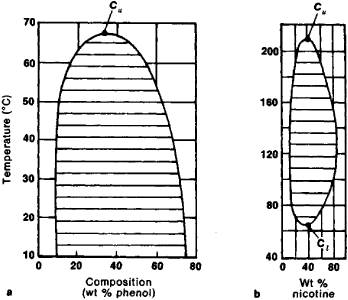 Figure 2. (a) Upper critical point (Cu of a liquid phenol-water mixture (Tc ≈ 66°C). The area in which the mixture consists of two phases having different concentrations of the components is marked by horizontal lines, (b) Two-component liquid nicotine-water system having both an upper solubility critical point (Cu, with TC = 208°C) and a lower critical point (Cl, with Tc ≈ 61 °C).

The transition of a system from a single-phase state to a two-phase state at a point other than the critical point and the change in state at the critical point itself take place very differently. In the first case, upon separation into two phases, the transition starts with the appearance or disappearance of an infinitely small amount of the second phase with a finite distinction of its properties from those of the first phase, which is accompanied by the evolution or absorption of the heat of phase transition. Since the appearance of such a new phase leads to the formation of an interface and surface energy, rather large nuclei are required for its creation. This means that for such a phase transition (first-order transition), supercooling or superheating of the first phase is possible because of the absence of viable nuclei of the new phase.

Upon approaching the critical state, the physical properties of a substance undergo a sharp change. The specific heat and susceptibility of the system to external action, such as isothermal compressibility in the case of pure liquids or magnetic susceptibility in the case of ferromagnets, undergo a theoretically unlimited increase. An entire set of special features in the behavior of substances is observed. These special features, which are characteristic of the critical state of extremely varied types of substances, are explained by the fact that the properties of substances in the critical state are determined not so much by the concrete laws of interaction of its particles as by the sharp in-crease in fluctuations and the fluctuation correlation length. A knowledge of the special features of substances in the critical state is necessary in many areas of science and technology and for the construction of power installations with supercritical parameters and of superconducting systems and installations for the compression of gases and the separation of mixtures.