[′krȯs ‚rā·shō]
(mathematics)
For four collinear points, A, B, C, and D, the ratio (AB)(CD)/(AD)(CB), or one of the ratios obtained from this quantity by a permutation of A, B, C, and D.
McGraw-Hill Dictionary of Scientific & Technical Terms, 6E, Copyright © 2003 by The McGraw-Hill Companies, Inc.
The following article is from The Great Soviet Encyclopedia (1979). It might be outdated or ideologically biased.

(also anharmonic ratio). The cross ratio of four collinear points M1M2, M3, M4 (Figure 1) is a number denoted by the symbol (M1M2M3M4 and equal to

In this case, the ratio M1M3/M3M2 is considered to be positive if the direction of the segments M1M3 and M3M2 is the same and negative if the directions are different. The cross ratio depends on the order of the numbering of the points, which may differ from the sequential order of the points on the straight line. In addition to the cross ratio of four points, there is also a cross ratio of four straight lines m1, m2, m3, m4, passing through the point O. This ratio is designated by the symbol (m1m2m3m4) and is equal to

where the angle (mimj) beween the straight lines mi and mj is considered with a sign. 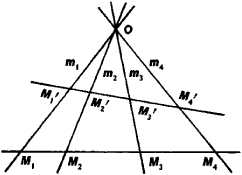 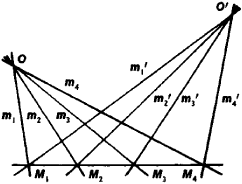 Feedback
Flashcards & Bookmarks ?
Please log in or register to use Flashcards and Bookmarks. You can also log in with
Flashcards ?
My bookmarks ?
+ Add current page to bookmarks
Mentioned in ?
References in periodicals archive ?
Tabachnikov in [5], the products [x.sub.j][x.sub.j+1] are themselves cross ratios. In fact, [x.sub.j] equals the cross ratios used in (1.1)-(1.2) to define [y.sub.j].
The pentagram map and Y-patterns