screw, simple machine consisting essentially of a solid cylinder, usually of metal, around which an inclined plane winds spirally, either clockwise or counterclockwise. It is used to fasten one object to another, to lift a heavy object, or to move an object by a precise amount. The ridge forming the inclined plane is called the thread; in cross section the ridge may be approximately triangular, square, or rounded. The vertical distance from any point on one thread to a corresponding point on the next successive thread is called the pitch. A thread can also be placed on the inner surface of a hollow cylinder. Two screws of the same pitch and diameter, one on the outer surface of a solid cylinder and the other on the inner surface of a hollow cylinder, can be arranged so that one may be driven spirally into the other, as in the common nut and bolt. The thread on the surface of the bolt is called the external, or male, screw; that on the inner surface of the nut, the internal, or female, screw. The common jackscrew used to lift automobiles, houses, and other heavy objects is an application of this principle. The internal screw is situated in the base, the external screw on a metal cylinder; at the top of the cylinder a lever or handle is fastened. As the handle is rotated, the external screw moves up the internal screw and the object placed on top of the jack is lifted. The mechanical advantage of the jackscrew, as of any other screw, is theoretically the ratio between the circumference through which the end of the handle moves and the pitch of the screw. Since, however, there is much friction in the operation of a screw, the amount of work put into this machine is much greater than the amount done and the efficiency is small. On the other hand, the small effort necessary to turn the handle, when compared to the enormous load raised, makes such a device of great value. The screw is often used for making delicate adjustments of tools and machines, e.g., in the micrometer screw and in the carburetor of the gasoline engine (for regulating the flow of gasoline). The self-tapping screw has notches in the first few threads that can cut female threads in a hollow cylinder. Wood and metal screws, the carpenter's and machinist's vise, the propeller of a boat or airplane, Archimedes' screw, and many other devices are applications of the screw.
The Columbia Electronic Encyclopedia™ Copyright © 2022, Columbia University Press. Licensed from Columbia University Press. All rights reserved.
The following article is from The Great Soviet Encyclopedia (1979). It might be outdated or ideologically biased.

[skrü]
(design engineering)
A cylindrical body with a helical groove cut into its surface.
A fastener with continuous ribs on a cylindrical or conical shank and a slotted, recessed, flat, or rounded head. Also known as screw fastener.
McGraw-Hill Dictionary of Scientific & Technical Terms, 6E, Copyright © 2003 by The McGraw-Hill Companies, Inc. 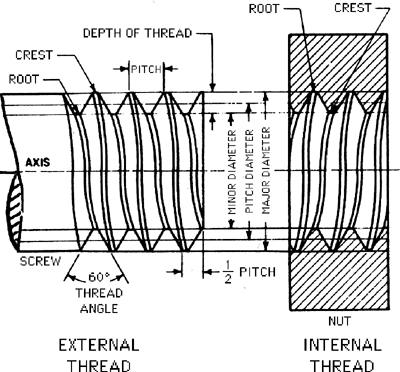 1. a device used for fastening materials together, consisting of a threaded and usually tapered shank that has a slotted head by which it may be rotated so as to cut its own thread as it bores through the material
2. a threaded cylindrical rod that engages with a similarly threaded cylindrical hole; bolt
3. a thread in a cylindrical hole corresponding with that on the bolt or screw with which it is designed to engage
4. Billiards snooker
a. a stroke in which the cue ball recoils or moves backward after striking the object ball, made by striking the cue ball below its centre
b. the motion resulting from this stroke
5. another name for propeller
6. Slang an old, unsound, or worthless horse
Collins Discovery Encyclopedia, 1st edition © HarperCollins Publishers 2005

(jargon)
(MIT) A lose, usually in software. Especially used for user-visible misbehaviour caused by a bug or misfeature. This use has become quite widespread outside MIT.
This article is provided by FOLDOC - Free Online Dictionary of Computing (foldoc.org)