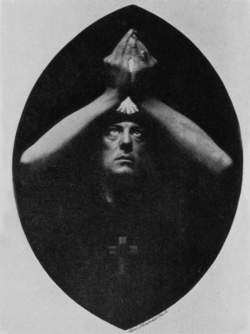 Born Edward Alexander Crowley, he changed his name after he read that the form of name most likely to become famous was one consisting of a dactyl followed by a spondee, hence Al-eis-ter Crow-ley. Later he was also to emphasize that his name was "Crowley, to rhyme with Holy." He was born in Leamington, Warwickshire, England, on October 12, 1875, the son of Edward, a wealthy brewer, and Emily, described as "a rather common woman." His father was also a fanatical preacher for the Plymouth Brethren, a sect that considered itself the only true Christian order.

Crowley was educated at Malvern and Tonbridge, and also by a private tutor. The latter was responsible for introducing Crowley to women, racing and gambling, for which Crowley was grateful, although he subsequently "caught the clap," as he put it, from a prostitute in Glasgow. In 1895 he entered Trinity College, Cambridge. He read assiduously and also began to write, publishing his first poem, Aceldama, privately while at Cambridge. Within ten years he had written thirty books, many of them poetry. He was an excellent chess player, a world traveler and a mountaineer of some note: in 1902 he climbed K2 (Chogo Ri), spending sixty-five days on the Baltoro Glacier and reaching an altitude of 22,000 feet.

Although Crowley preached with his father in his youth, he soon became disenchanted with the Plymouth Brethren and rebelled to the point where his mother likened him to the Great Beast of the Book of Revelations. This description caught Crowley's imagination and he accepted himself as that Beast. He despised his mother, later referring to her as "a brainless bigot."

His father died of cancer when Aleister was eleven, leaving him a substantial inheritance. He left Cambridge without having acquired a degree and became deeply interested in the occult. After reading A. E. Waite's The Book of Black Magic

and Pacts (London, 1898), Crowley struck up a correspondence with Waite and determined to become a member of the Great White Brotherhood. On November 18, 1898, he joined the London Lodge of the Hermetic Order of the Golden Dawn, which had been founded only the year before and was the outer order of the Great White Brotherhood. At his initiation, Crowley took the magical name Perdurabo, meaning "I will endure to the end."

The leader of the London Lodge of the Golden Dawn was Samuel Liddell Mathers, who later dubbed himself MacGregor Mathers. Crowley exhibited an aptitude for ceremonial magic, and he and Mathers developed a competitive relationship, with Crowley determined to take over Mathers's leadership of the Order. Crowley moved up in the degree system rapidly but eventually his competition with Mathers, and Mathers' own mismanagement resulted in the collapse of the London chapter of the Golden Dawn.

Crowley then went to Mexico, where he continued his study and practice of magic. He later founded his own magical order, the Silver Star or Argentium Astrum, or A.A.

In 1903 Crowley married Rose Kelly, sister to the artist Sir Gerald Kelly, who bore him a daughter, Lola Zaza. On a visit to Cairo, Rose fell into a trance at the Egyptian Museum and led her husband to the exhibit of a wooden stele of the twentysixth dynasty. It bore an image of Horus in the form of Ra-Hoor-Khuit and, to Crowley's amazement, the exhibit bore the number 666—his number, the number of the Great Beast. At their Cairo apartment, Crowley sat in the temple he had built, and over a period of three days he claimed to hear the voice of Aiwass, his Holy Guardian Angel, who dictated what was to become the "Book of the Law," or Liber Legis. From this book, Crowley took his famous dictum, "Do what thou wilt shall be the whole of the Law. Love is the Law. Love under Will." One hundred and fifty years earlier Sir Francis Dashwood had inscribed part of this phrase—as Rabelais's Fay ce que voudras—over the entrance to his Medmenham Abbey, home of the infamous "Hellfire Club." Later Gerald Gardner adapted it, in modified form, as "An it harm none, do what thou wilt. Love is the Law; Love is the Bond," as the Craft dictum.

Over a period of years, beginning in 1909, Crowley published the rituals of the Golden Dawn in the official journal of the A.A., The Equinox (published twice a year), much to MagGregor Mathers's dismay. Crowley then became associated with the Ordo Templi Orientis, a German magical order that emphasized sex magic. In 1909 he began a homosexual relationship with poet Victor Neuburg. On September 27, 1911, Rose was certified insane and Crowley established a relationship with Mary d'Este Sturges, a companion of Isadora Duncan. Over the years Crowley formed liaisons with many women, all of whom he considered his Scarlet Woman.

Crowley lived in the United States from 1915 to 1919. In January of 1919, in New York, he met Leah Faesi and branded her with a heated knife, proclaiming her his Scarlet Woman. The following year they went to France, where Crowley met with Ninette Shumway, who came under his influence and became a mistress, although Leah was pregnant by this time. Leah gave birth to a daughter with whom she soon returned to England. Ninette, meanwhile, became pregnant and she and Crowley moved to Cefalu, Sicily, where he established the Abbey of Thelema. In 1920, Leah and her child joined them at the abbey, as did various devotees, including the actress Elizabeth Fox. Sex magic (including Leah's mating with a goat) and drugs predominated, culminating in the death of Frederick Charles (Raoul) Loveday—some say from drinking the blood of a sacrificed cat. In April, 1923, Mussolini, ruler of Italy, expelled Crowley, who then wandered through France, Tunisia and Germany. In 1924 he dropped Leah as his Scarlet Woman and took up with Dorothy Olsen, an American. While in Africa, Crowley encountered Herr Traenker of Gera, Germany, Grand Master of the O.T.O. of that country. Traenker, who was familiar with Crowley's reputation, saw in him a successor to the recently deceased Theodor Reuss, international head of the Order.

Scarlet Women came and went until 1929, when Crowley married Maria Ferrari de Miramar, described by him as "the High Priestess of Voodoo." A year later he had left her too, and like his first wife, Rose, she ended up in Colney Hatch, a lunatic asylum. It was about this time that Crowley wrote his Magick: in Theory and Practice, perhaps his best book on magic.

In 1934, Crowley started libel proceedings in England against his old friend,

the sculptress Nina Hamnett, who had referred to him as a purported black magician in her biography. Newspaper reports about the trial publicized Crowley's colorful and debauched lifestyle and dubbed him "The Wickedest Man in the World." He lost the case and with it all of his money. In 1937 he issued The Equinox of the Gods, followed in 1944 by The Book of Thoth.

At the close of World War II Crowley retired to Hastings, on the south coast of England, where he maintained a low profile despite intermittent newspaper exposés. By this time, his longstanding addiction to heroin was severe. He died in Hastings on December 1, 1947, and was cremated four days later. At the service, Louis Wilkinson (the novelist Louis Marlow) read Crowley's Hymn to Pan.

Arnold Crowther and Gerald Gardner visited Crowley in the last few months of his life. Gardner said that Crowley knew of Witchcraft but considered it "too tame" and never practiced it. He did, however, present Gardner with a charter to start a branch of the O.T.O. on the Isle of Man. It has been suggested that Crowley wrote what became the Gardnerian Book of Shadows, but although Gardner borrowed some of Crowley's excellent poetry, Crowley had nothing to do with writing the Book. 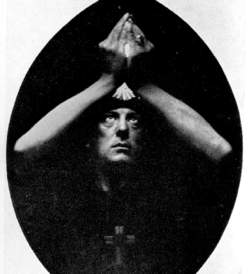 Aleister Crowley, author of Magick and a leader of the occultist movement of the late nineteenth century. Reproduced by permission of Fortean Picture Library.

Aleister Crowley, a famous English occultist and writer, was born on October 12, 8715, in Leamington, Warwick, England. He was a wealthy eccentric who inherited a fortune and was educated at Cambridge. He joined the Hermetic Order of the Golden Dawn, founded the Magical group, and wrote numerous books. He was married many times, outraged polite British society, and died of a drug overdose.

Crowley lived in the United States during World War I and had a brief association with Evangeline Adams during which he proposed a joint book on astrology—a project never manifested. Crowley did write an astrology book prior to leaving America in 1919, but this manuscript was not published until 1974. Despite the character of the author, Crowley’s Complete Astrological Writings is suggestive and merits reading.

He also wrote a short piece, “How Horoscopes Are Faked,” under the pseudonym Cor Scorpionis (Latin for “scorpion’s heart”) that appeared in a small-circulation New York periodical in 1917. This article was a thinly disguised attack on Adams, whom Crowley accused of practicing astrology for profit (Crowley was wealthy and did not need to work for a living) and other sins. The piece was clearly sour grapes, written after the book project was rejected. Crowley died on December 1, 1947.