crusher, machine used to reduce materials such as ore, coal, stone, and slag to particle sizes that are convenient for their intended uses. Crushers operate by slowly applying a large force to the material to be reduced. Generally this is accomplished by catching it between jaws or rollers that move or turn together with great force. Reduction in size is generally accomplished in several stages, as there are practical limitations on the ratio of size reduction through a single stage.
The Columbia Electronic Encyclopedia™ Copyright © 2022, Columbia University Press. Licensed from Columbia University Press. All rights reserved.
The following article is from The Great Soviet Encyclopedia (1979). It might be outdated or ideologically biased.

a machine for crushing hard materials, chiefly mineral raw materials. A distinction is made between primary crushing (up to 100-300 mm), secondary crushing (25-100 mm) and pulverization (5-25 mm). Crushers are divided into five classes depending on the shape of the crushing member (Figure 1). 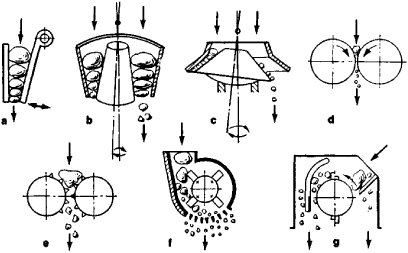 In cone crushers, which appeared in 1877, the crushing is done within a stationary conical bowl by a cone that performs a circular rocking (gyratory) motion. Where the cones come together, the material is crushed or broken by bending, and it falls out when the cone moves away. In cone crushers for primary crushing, the stationary conical bowl is mounted with the apex on the bottom, and the crusher cone is steep, with an angle of about 20° at the top. In cone crushers for secondary crushing and pulverization, the crusher bowl is mounted with the apex up; the cone is flat, the angle at the top is about 100°, and the annular discharge opening is large. Cone crushers for secondary crushing and pulverization were introduced in industry in the 1920’s.

In roll crushers the material is pulled by forces of friction and crushed between two parallel cylindrical rolls rotating in opposite directions at the same speed. The rolls pull in a piece of material if the diameter of the roll is approximately 20 times greater than the size of the piece. Roll crushers appeared in England in 1806. Toothed roll crushers are used for brittle and soft materials such as coal and salt; they pull in pieces that are only 1.5-4 times smaller than the diameter of the roller.

Hammer crushers, or hammer mills, crush material by blows from hammers that are mounted by hinges on a rapidly turning rotor (the tip speed of the hammers is up to 55 m/sec), and the pieces of material are also broken by blows against the plates of the mill. Such mills in their modern form were proposed by Williams (USA) in 1895.

Rotary crushers use a massive, rapidly turning rotor with rigidly attached hammers and repeated blows of the pieces on the strike plates or screens. Such crushers were patented in the USA (1842) and used in the USA in 1939 and in Germany in 1942.

Rod crushers (disintegrators) were invented in England in 1859.

Crushers of the first three types are used to crush hard materials (ores and building stone); hammer breakers are used for brittle and soft materials (coal, limestones, and bauxites). The main characteristics of modern crushers are given in Table 1. The general features that are required in crushers are ease of unloading of materials and replacement of worn parts, protection against breakdowns when uncrushable objects enter the machines, and simplicity of regulation of the size of the product. Improvements in crushers are directed toward an increase in their size, the introduction of wear-resistant metals, and the use of hydraulic devices to guard against breakdowns and to control the size of the product.

a machine for smashing the stems of sown herbaceous plants to facilitate drying. The crusher works independently or with a mounted mower. The basic working parts of the PTP-2.0 machine used in the USSR are the drum pickup with spring pins and two crusher rollers located one above the other. The upper roller can be moved in guides, depending on the thickness of the layer of stalks being taken in by the crusher. The lower roller has longitudinal grooves that improve the grip on the stalks. The upper roller is forced against the lower one by springs, the tension of which is adjusted for the type of plant to be processed. The productivity of the crusher is 1.4 hectares per hour; the operating width is 1.95 m. The working parts of the crusher are driven by the power takeoff shaft of the tractor.

Feedback
Flashcards & Bookmarks ?
Please log in or register to use Flashcards and Bookmarks. You can also log in with
Flashcards ?
My bookmarks ?
+ Add current page to bookmarks
Mentioned in ?
References in periodicals archive ?
Chapter 5 Mobile Crushers Market Methodology and Data Source
Mobile Crushers Market Advanced Technology to Improve Product Facilities by 2024
The 10hp Model Z powering the Old Threshers rock crusher is typical of engines once used on the farm to pump water, shell and grind corn, and run elevators and hay presses.
Rock Star: Early rock crushers were critical to crop production--and provided an additional revenue stream on the farm
Despite its low height, the ERC achieves significantly higher throughputs than conventional crushers. The new series currently includes four models with capacities between 600 and 8,000 tph.
thyssenkrupp to Introduce Eccentric Roll Crusher
"A large number of customers use the BF90.3 crusher bucket for excavators weighting up to 21 tons and the BF120.4 crusher bucket for excavators weighing 30 tons and above for their daily operations in road-construction, piping operations, demolitions and urban sites.
The impact of crushing directly with excavators
The challenge was to increase the productivity and the production of the crusher despite this.
MB Crusher makes impression on Lebanon machinery market
Engineering Division Director General (DG) Dr Nadeem Amjad said a major part of sugarcane was crushed at farm level to produce gur, shakkar and brown sugar and the mobile crusher would help the farmers.
NARC engineers develop mobile sugarcane crusher
(i) Nonlinear behavior of copper crusher gauge material parameters at high pressure
Nonlinear Material Behavior Analysis under High Compression Pressure in Dynamic Conditions
"We all are working here as stone crushers and there have money related demands from the militants.
Manipur militants target stone crushers
Be Enterprising coach Helen Hambleton said: "When you first meet Karen you are blown away by her passion and enthusiasm for her little furry friends, collectively known as Team Crusher.
Firm's focus based on all things ferret
crusher is powered by a Tier 3 Caterpillar C15 540 hp diesel engine housed inside a noise-insulated engine compartment.
A rock crusher on the go: Telsmith introduces a track-mounted crushing plant
Through the use of an onboard diagnostic screen, the operator can view all the critical crusher, vibrating feeder, engine and system performance data in Spanish or English.
KPI-JCI introduces control system
Army unveiled the Crusher unmanned ground combat vehicle last week in a ceremony hosted by the Carnegie Mellon University's National Robotics Engineering Center in Pittsburgh, Pa.
Army news service (May 4, 2006): Crusher unmanned ground combat vehicle unveiled