[¦krī·ō·i‚lek′trän·iks]
(electronics)
A branch of electronics concerned with the study and application of superconductivity and other low-temperature phenomena to electronic devices and systems. Also known as cryolectronics.
McGraw-Hill Dictionary of Scientific & Technical Terms, 6E, Copyright © 2003 by The McGraw-Hill Companies, Inc.
The following article is from The Great Soviet Encyclopedia (1979). It might be outdated or ideologically biased.

(cryogenic electronics), a discipline embracing the study of interactions between electromagnetic fields and electrons in solids under cryogenic conditions (below 90°K) and the design of electronic instruments based on them.

Figure 1. (a) Equivalent schematic diagram of a low-temperature parametric amplifier, (b) Current-voltage characteristic of the metal-semimetal junction (U is voltage and I is current) and the dependence of its capacitance C on the voltage for T < 80°K; the dotted line shows the same characteristic for room temperature (300°K); Up and wp are the voltage and frequency of pumping, (c) The metal-semimetal junction is the active element of the amplifier.

Cryoelectronic instruments use a variety of phenomena: superconductivity of metals and alloys, dependence of the dielectric constant of some dielectrics on electric fields, and appearance of semiconductor properties in metals at temperatures below 80°K with anomalously high conduction electron mobility.

The cryoelectronic devices include memory and logic devices in computer technology; superhigh-frequency (SHF) generators, amplifiers, switching devices, resonators, detectors, frequency converters, filters, delay lines, and modulators; and superconducting magnetometers, galvanometers, and bolometers. An objective of cryoelectronics is the design of electronic cooling devices, as well as miniature devices that combine the electronic circuit, the cryostat (which functions as a hermetic seal), and the cooling device into a single structure.

Cryotrons. The development of cryoelectronics began with the design of the cryotron (1955), a miniature switching element whose operation is based on superconductivity. Cryotrons are components of logic, memory, and switching devices. They are distinguished by low power consumption (10−18 joules), small dimensions (as low as 10−6 sq mm), and high Speed of operation (switching time, about 10−11 sec). The first wire cryotrons were supplanted by film cryotrons (1958–60). Other film memory devices appeared in 1955–56, among them the persistor, persistatron, and Crow cell, but they have not found wide use. The main cryoelectronic element in computer technology is still the film cryotron. The tunnel cryotron, based on the Josephson effect, was developed in 1967.

Cryoelectronic amplifiers. The problems of reception of weak SHF signals stimulated the appearance of low-temperature solid-state amplifiers based on various physical phenomena and having negligibly low noise levels. They include, above all, the paramagnetic quantum mechanical amplifier and the parametric amplifier, which operates at 90°K. In the latter, the role of the active element (the parametric semiconductor diode) is played either by the p-n junction in a semiconductor with high carrier mobility at temperatures below 90°K or by the metal-semimetal junction (InSb; see Figure 1). The semimetal becomes a semiconductor at temperatures below 90°K, with a carrier mobility 102–103 times greater than in germanium or silicon. The power consumption of amplifiers of this type is about 10−1 to 10−2 watts.

Superconducting amplifiers are also based on the principle of parametric amplification, but in this case the inductance L rather than the capacitance C of the oscillation system varies (Figure 2). The inductive element of such an amplifier consists

Figure 2. (a) Diagram of a superconducting amplifier: (L) controlled inductance, (Rj) resistance of the Josephson junction, (b) Active element of the amplifier. 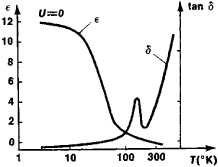 Paraelectric amplifiers are based on anomalously high polarization of certain dielectrics (for example, SrTiO3) at low temperatures. The dielectric constant of such dielectrics (paraelectrics) is 10 to 15 × 103, and a strong dependence of the dielectric constant on the intensity of the external electric field appears below 80°K (Figure 3). The active element of a paraelectric amplifier is an electric capacitor filled with such a paraelectric material and placed in an electric field (pumping). The capacitance of such a capacitor changes periodically with the pumping frequency, which makes possible parametric amplification (Figure 4).

Figure 4. (a) Active element of a parametric amplifier, (b) Dependence of its capacitance C on voltage at T = 4.2°K; the dotted line shows the same relationship at room temperature.

Amplifiers exist that use combinations of the methods mentioned above. For example, the combination of the variable inductance L of a superconductor and the capacitance C of a “locked” metal-semimetal junction makes it possible to design an amplifier in which a single generator modulates C and L, thus improving the amplifier characteristics (Figure 5).

The noise temperature Tn is a quantitative criterion of cryo-electronic amplifiers, in which it may be of the order of a few degrees or a fraction of a degree Kelvin (Figure 6). At the same time, cryoelectronic amplifiers have a broad transmission band and high amplification efficiency (usually from 10 to 104).

Cryoelectronic resonators. The increase in the stability of SHF generators is limited by the magnitude of the quality factor Q of cavity resonators, which depends on active losses in their conducting walls. The theoretical limit of Q for common resonators is 2−8 × 103 for the main type of waves in the centimeter band. The efficiency may be increased by a factor of 10–100 by cooling to 15°–20°K as a result of the reduction of electron scattering caused by the thermal lattice vibrations of the metal.

Resonators with superconducting walls should theoretically have an infinite quality factor because of the absence of losses in the surface layer of the superconductor. However, in reality losses exist because of the inertia of electrons. On the other hand, at very high frequencies (of the order of 1011 Hz), when the quantum energy of the electromagnetic field is comparable to the disintegration energy of the superconducting electron pairs (3.52kT), the losses in the superconductive and normal states become identical. Therefore, the maximum quality factor (Q ∼ 1011) is achieved in the decimeter wavelength band. The quality factor of superconducting resonators is of the order of 107–109 for λ ═ 3 cm. Superconducting resonators may be used to improve the frequency stability of ordinary klystrons from 5 × 10−4 to 10−9–10−10 (that is, to the stability level of the quantum frequency standards), retaining all of the advantages of klystrons. Superconducting resonators usually operate at helium temperatures (4.2°K). When type II (hard) superconductors are used in these devices, their operating temperature may be raised to 10°–15°K.

Filters and delay lines. A superconducting filter is a chain of series-connected superconducting resonators. The selectivity of such filters in the stop band is 103–108 times greater than of ordinary filters.

The simplest type of superconducting delay line is a thin cable made from a superconductor, coiled into a spiral and placed in a cryostat. The length of the cable corresponds to the delay time τ of the signal (of the order of a millisecond or fractions of a millisecond). Such devices are used in radar and measurement technology. Superconducting meanders, which are winding lines made from thin superconducting films on dielectric substrates, are used to produce delay times of the order of nanoseconds or picoseconds. The delay time of such lines may be controlled by using external fields to change the distributed inductance of the lines. Paraelectric filters and delay lines are also used.

Cooling. Cooling in cryoelectronics is achieved in various ways. The cryostat, which is usually the envelope of the device, is frequently connected to a cryogenic installation. The Joule-Thomson effect, the Peltier effect, the Ettingshausen effect, and magnetic cooling are also used. Cooling of instruments for space research and maintenance of low temperatures is performed by solid gases (1 kg of solid nitrogen lasts in space for up to a year).

Several instruments are sometimes placed in a common cryostat, which may also perform other functions, such as that of an antenna. Integration is achieved in this way. The development of cryoelectronics, particularly integral cryoelectronics, increases the reliability of devices, decreases their dimensions, and extends the areas of their application.

Feedback
Flashcards & Bookmarks ?
Please log in or register to use Flashcards and Bookmarks. You can also log in with
Flashcards ?
My bookmarks ?
+ Add current page to bookmarks
Mentioned in ?
References in periodicals archive ?
The [micro]cal-EDS operates at extremely low temperature, 100 inK, and the detector makes extensive use of superconducting cryoelectronics for the critical thermometry that constitutes the measurement of photon energy.
Barriers to quantitative electron probe x-ray microanalysis for low voltage scanning electron microscopy
Although the low noise and REACH configurations are identical, the NF can be reduced further by using cryoelectronics for the filter/amplifier.
A receiver front end for wireless base stations
However, Lawrence Livermore National Laboratory and STAR Cryoelectronics LLC's Superconducting Tunnel Junction (STJ) X-ray 1 Spectrometer offers more than 10 times higher energy resolution than current x-ray spectrometers based on silicon or germanium semiconductors.
X-rays provide higher energy resolution