Departures of a crystalline solid from a regular array of atoms or ions. A “perfect” crystal of NaCl, for example, would consist of alternating Na+ and Cl- ions on an infinite three-dimensional simple cubic lattice, and a simple defect (a vacancy) would be a missing Na+ or Cl- ion. There are many other kinds of possible defects, ranging from simple and microscopic, such as the vacancy and other structures shown in the illustration, to complex and macroscopic, such as the inclusion of another material, or a surface.

Natural crystals always contain defects, due to the uncontrolled conditions under which they were formed. The presence of defects which affect the color can make these crystals valuable as gems, as in ruby (Cr replacing a small fraction of the Al in Al2O3). Crystals prepared in the laboratory will also always contain defects, although considerable control may be exercised over their type, concentration, and distribution.

The importance of defects depends upon the material, type of defect, and properties which are being considered. Some properties, such as density and elastic constants, are proportional to the concentration of defects, and so a small defect concentration will have a very small effect on these. Other properties, such as the conductivity of a semiconductor crystal, may be much more sensitive to the presence of small numbers of defects. Indeed, while the term defect carries with it the connotation of undesirable qualities, defects are responsible for many of the important properties of materials, and much of solid-state physics and materials science involves the study and engineering of defects so that solids will have desired properties. A defect-free silicon crystal would be of little use in modern electronics; the use of silicon in devices is dependent upon small concentrations of chemical impurities such as phosphorus and arsenic which give it desired electronic properties.

An important class of crystal defect is the chemical impurity. The simplest case is the substitutional impurity, for example, a zinc atom in place of a copper atom in metallic copper. Impurities may also be interstitial; that is, they may be located where atoms or ions normally do not exist. In metals, impurities usually lead to an increase in the electrical resistivity. Impurities in semiconductors are responsible for the important electrical properties which lead to their widespread use. The energy levels associated with impurities and other defects in nonmetals may also lead to optical absorption in interesting regions of the spectrum.

Even in a chemically pure crystal, structural defects will occur. These may be simple or extended. One type of simple defect is the vacancy, but other types exist (see illustration). The atom which left a normal site to create a vacancy may end up in an interstitial position, a location not normally occupied. Or it may form a bond with a normal atom in such a way that neither atom is on the normal site, but the two are symmetrically displaced from it. This is called a split interstitial. The name Frenkel defect is given to a vacancy-interstitial pair, whereas an isolated vacancy is a Schottky defect. 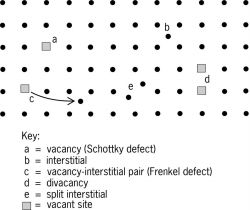 Some simple defects in a lattice

The simplest extended structural defect is the dislocation. An edge dislocation is a line defect which may be thought of as the result of adding or subtracting a half-plane of atoms. A screw dislocation is a line defect which can be thought of as the result of cutting partway through the crystal and displacing it parallel to the edge of the cut. Dislocations are of great importance in determining the mechanical properties of crystals. A dislocation-free crystal is resistant to shear, because atoms must be displaced over high-potential-energy barriers from one equilibrium position to another. It takes relatively little energy to move a dislocation (and thereby shear the crystal), because the atoms at the dislocation are barely in stable equilibrium. Such plastic deformation is known as slip.

For both scientific and practical reasons, much of the research on crystal defects is directed toward the dynamic properties of defects under particular conditions, or defect chemistry. Much of the motivation for this arises from the often undesirable effects of external influences on material properties, and a desire to minimize these effects. Examples of defect chemistry abound, including one as familiar as the photographic process, in which incident photons cause defect modifications in silver halides or other materials. Properties of materials in nuclear reactors is another important case.

disruptions in the regularity of the crystal structure in real single crystals. In idealized crystal structures, atoms occupy strictly defined positions, forming regular three-dimensional lattices (crystal lattices). In natural and artificially grown real crystals, various deviations from the regular location of atoms or ions or of groups of atoms or ions are usually observed. Such disturbances may be either on an atomic scale or of macroscopic dimensions, noticeable even to the naked eye. In addition to static defects, there exists another type of deviations from the ideal lattice that are related to thermal oscillations of the particles that make up the lattice (dynamic defects).

Crystal defects are formed during growth of crystals; under the influence of thermal, mechanical, and electrical factors; and upon irradiation by neutrons, electrons, X rays, and ultraviolet radiation (radiation defects).

Point defects. Part of the atoms or ions may be missing at sites that correspond to the ideal lattice pattern. Such defective sites are called vacancies. Foreign (extrinsic) atoms or ions may be present in crystals, replacing the primary particles that form the crystal or being incorporated among them. Intrinsic atoms or ions that have been displaced from normal positions (interstitial atoms and ions), as well as color centers—combinations of vacancies with conduction electrons (F-centers), with extrinsic atoms and conduction electrons (Z-centers), or with holes (V-centers)—are also point defects.

In ionic crystals, which are formed by particles of two types (positive and negative), point defects occur in pairs. Two vacancies of opposite sign form a Schottky defect. A pair consisting of an interstitial ion and the vacancy that it has abandoned is called a Frenkel defect.

Atoms in crystals are located at equal distances from each other in rows that extend in certain crystallographic directions. If one atom is displaced from its position by an impact with an incident particle released by irradiation, it may in turn displace the neighboring atom, and so on. Thus, an entire row of atoms may be displaced, and on some segment of the row of atoms one atom will become superfluous. Such a disturbance in the location of atoms or ions along specific directions, accompanied by the appearance of an excess atom or ion in a certain segment of a row, is called a crowdion. Irradiation also removes atoms or ions from equilibrium position in other directions, and the motion is transmitted to increasingly distant atoms. As the distance from the point of collision of the incident particle with an atom of the crystal increases, the momentum transfer is found to be localized (focused) in the most densely packed directions. Such staged transfer of the pulse of an incident particle to the ions or atoms of the crystal with constant focusing of the momentum along densely packed atomic rows is called a focuson.

Line defects. In real crystals some atomic planes may be broken. The edges of such broken (excess) planes form edge dislocations. Screw dislocations, which are associated with the twisting of the atomic planes in the form of a spiral staircase, as well as complicated types of dislocations, also exist. Occasionally linear crystal defects are formed from an accumulation of point defects that lie in chains.

In crystals, defects cause elastic distortions of the structure that in turn cause the appearance of internal mechanical stresses. For example, point defects strengthen or weaken crystals by interacting with dislocations. Crystal defects affect absorption and luminescence spectra and the scattering of light in the crystal and change the electric and thermal conductivity and the ferroelectric and magnetic properties. The mobility of the dislocations determines the plasticity of the crystals, and pileups of dislocations bring about the appearance of internal stresses and fracture of the crystals. Dislocations are sites of accumulation of impurities; they impede the processes of magnetization and electrical polarization through interaction with the domain boundaries. Three-dimensional defects reduce plasticity and affect the strength and electrical, optical, and magnetic properties of a crystal in the same way as do dislocations.

Feedback
Flashcards & Bookmarks ?
Please log in or register to use Flashcards and Bookmarks. You can also log in with
Flashcards ?
My bookmarks ?
+ Add current page to bookmarks
Mentioned in ?
References in periodicals archive ?
Atomic defects in materials such as diamond are one such system, but a lack of techniques for fabricating and engineering crystal defects at the atomic scale has limited progress to date.
Accelerating Quantum Technologies with Materials Processing at the Atomic Scale
The phenol would be photocatalyzed because more naked Zn atoms on the crystal defects bind O atoms of phenol molecules.
Controllable Tuning Various Ratios of ZnO Materials Polar Facets in Dimethylacetamide Media and their Kinetic Photocatalytic Activity
SDK's SiC epitaxial wafer business has been achieving growth rate higher than that of the market because manufacturers of power devices appreciate the lowest incidence of crystal defects and the highest homogeneity of wafers in the world which SDK's HGE achieved.
SDK to Re-expand Capacity to Produce High-Grade SiC Epitaxial Wafers
As MOSFET's oxide film, formed on the surface of an epitaxial wafer, is used in device operations, finer surface defect (SD) and various types of crystal defects, including basal plane dislocation (BPD), considerably affect the yield and product quality.
SDK to Offer SiC Epitaxial Wafers with Very Low Defect Density
The authors have organized the main body of their text in eleven chapters devoted to mechanical and fracture properties of solids, crystal defects and disorder in lattice models, nucleation and extreme statistics in brittle fracture, and a wide variety of other related subjects.
Statistical Physics of Fracture, Breakdown, and Earthquake: Effects of Disorder and Heterogeneity
However, the effect of milling operations, a large number of crystal defects in mixed network presents Yd.
Chemical MECHANO concurrent review of copper oxide, zinc oxide and lead oxide and the effect of temperature
increased ON resistance, forward voltage, and resistance deterioration) and premature failure of the gate oxide film by improving processes related to crystal defects and device structure, reducing ON resistance per unit area by about 30% over conventional products.
Future Electronics Features the 2nd Generation High Voltage SiC MOSFETs from ROHM Semiconductor
Thus, ZnO NRs grown on stainless steel wire contained many crystal defects which are mainly related to oxygen vacancies.
Growth of ZnO nanorods on stainless steel wire using chemical vapour deposition and their photocatalytic activity
They cover configuration and conformation of macromolecules in polymer crystals, the packing of macromolecules in polymer crystals, determining crystal structure from X-ray diffraction, defects and disorder in polymer crystals, analyzing diffuse scattering from disordered structures of polymers, crystal habits, and the influence of crystal defects and structural disorder on the physical and mechanical properties of polymeric materials.
Crystals and crystallinity in polymers; diffraction analysis of ordered and disordered crystals
(2009) Mechanism of cadmium induced crystal defects in developing rat tooth enamel.
Combined effects of estrogen deficiency and cadmium exposure on calcified hard tissues: animal model relating to itai-itai disease in postmenopausal women
However, mesoporous films are of a nanocrystalline nature and contain numerous crystal defects in the grain boundaries.
Alignment of Ti[O.sub.2] (anatase) crystal of dye-sensitized solar cells by external magnetic field