the science concerned with the formation, properties, and structure of crystals

The branch of science that deals with the geometric forms of crystals. How to describe, classify, and measure such forms are the first questions of crystallography. Revealing the forces that made them and the activities within them are the modern directions of the field. Crystallography is essential to progress in the applied sciences and technology and developments in all materials areas, including metals and alloys, ceramics, glasses, and polymers, as well as drug design. It is equally vital to progress in fundamental physics and chemistry, mineralogy and geology, and computer science, and to understanding of the dynamics and processes of living systems. See Crystal structure, Polymorphism (crystallography)

The external morphology of crystals reflects their growth rates in different directions. These directions remain constant during the course of the growth process, and are represented mathematically as the normals to sets of parallel planes that are imagined as being added on as growth proceeds. The faces that meet and define an edge belong to a zone, a zone being a set of planes that share one common direction, the zone axis. The invariance of interfacial angles, measured by rotation about an axis that is defined by the zone direction, was discovered in the seventeenth century. See Crystal growth

Interfacial angles are calculated from spherical geometry. Figure 1 illustrates the procedure for a crystal having well-developed faces of which three are mutually perpendicular. The normals to these faces are the natural directions for constructing an orthogonal frame of reference for measurement. The crystal is imagined to be shrunk and placed at the center of a sphere with coordinates (0,0,0). The face normals, labeled [100], [010], and [001], define the directions of an orthogonal reference system. Normals to the same set of planes, but oppositely directed, are labeled [_00], [0_0], [00_]. The reversal of sign indicates that the crystal must be rotated 180° to obtain the same view. Rotation about the [001] direction interchanges the positions of [100] and [_00] faces and their bounding edges. Rotation about [010] turns these faces upside down. Correct designations for group movements and symmetry operations are clearly essential for establishing and maintaining orientation in crystal space. The directions of face normals determine points at which the imagined sphere is pierced. The solid angles between an array of such points, all lying on the same great circle of the sphere, belong to a zone. 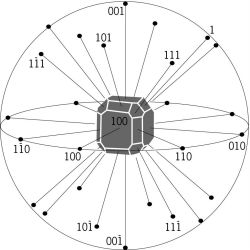 Optical measurements and stereographic projections established the constancy of interfacial angles, independent of how well developed the faces are. Such properties as the cleavage of large rhombohedral crystals of calcite (CaCO3) into little rhombs suggested that the large crystal could be represented by geometrically identical smaller units stacked together, by translation, to fill space. The 14 lattices of Bravais (Fig. 2) enlarged the seven crystal systems of optical mineralogy by adding centering points to them: body (I), face (F), and base (C) centers. The 14 lattices define three-dimensional distributions of mathematical points such that the environments of all points of the lattice are identical. They also define the symmetries of frameworks for constructing mathematical models to represent the observed and measured realities—models made from cells of the smallest volume, but also highest symmetry, that stack together by translation to fill space. The 14 Bravais lattices, derived by centering of the seven crystal classes (P and R) defined by symmetry operators

The lattices also provide the means to identify imaginary planes within the cell; these are called Miller indices (h,k,l). They consist of small whole numbers. For example, each of the six faces of a simple cube, with the origin of a coordinate frame of reference at the cube body center, is normal to one of the reference axes and parallel to the plane defined by the two others. The six faces are indexed as their normals in Fig. 1—(100), (_00), (010), (0_0), (001), and (00_)—to represent a face that intercept the x, x axis but not the y and z; the y, y axis but not the x and z; and so forth. Hypothetical parallel planes with 1/2 the interplanar spacing are represented as (200), (_200), (020), and so forth.

A complete mathematical formalism exists for modeling an external morphological form and the symmetry relations between imagined units of structure within it. The symmetry operators include rotation axes, glide and mirror planes, and left- and right-handed screw axes which will simultaneously rotate and translate a three-dimensional object to create its clone in a different spatial position and orientation. The operators minimize the detail required to specify the spatial arrangements of patterns and objects that fill two-dimensional and three-dimensional space. The so-called color space groups of crystallography greatly increase the number of distinguishably different symmetries beyond the classical 230 by adding a fourth coordinate to the three space coordinates. This is done to encode a real difference that will be manifested in some property. The different directions of the magnetic moments of chemically identical atoms of an element such as iron provide an example of the need for representing a difference on the atomic level between cells that are otherwise identical.

The sharp x-ray line spectra characteristic of the bombarded element are the primary probes for determining interior structural detail of crystals. Cameras with cylindrical film and enclosed powdered samples record all diffraction lines as arcs of concentric circles. This fundamental powder method has endured since 1917 and is now employed with improved beam purity and optics, improved diffractometers which couple sample and detector rotation, electronic detection, rapid sequential recording, and computer indexing programs that provide patterns of compounds, mixtures of phases, and dynamic changes that occur when crystals are subjected and respond to external stress. The method is applied to single crystals, polycrystalline aggregates, and multiple-phase mixtures, randomly disposed either in space or in geometrically designed composite materials. See X-ray crystallography, X-ray powder methods

the science of crystals and the crystalline state of substances; the study of the symmetry, structure, formation, and properties of crystals.

Crystallography arose in antiquity, when observations in nature were made of crystals with the natural form of regular polyhedra. Crystallography has been an independent science since the middle of the 18th century. During the 18th and 19th centuries it developed, with mineralogy, as the discipline establishing the principles governing the nature of crystal faces (R. Haüy, 1784). The theory of the symmetry of crystals was developed for external form by A. V. Gadolin in 1867 and for internal spatial structure by E. S. Fedorov in 1890 and by A. Schoenflies in 1891. The body of methods for the description of crystals and of their conformity to established principles constitutes the concern of geometric crystallography.

Geometric crystallography developed the hypothesis for an ordered, three-dimensional, periodic arrangement of the component particles of the crystal—that is, in the modern view, of the atoms and molecules that make up the crystal lattice. The discovery of X-ray diffraction in crystals confirmed the existence of the crystal’s periodic lattice structure experimentally. X-ray diffraction was first used concretely to decipher the atomic structures of crystals (for NaCl, diamond, and ZnS) by W. H. Bragg and W. L. Bragg. The study of light transmission through crystals (crystal optics) made it possible to formulate the principles of the anisotropy (nonuniformity relative to direction) of crystal properties.

Modern crystallography is developing as a branch of physics closely related to chemistry and mineralogy. Its application has broad technological possibilities. Its mathematical bases lie with symmetry-group theory and tensor calculus.

Structural crystallography investigates the atomic and molecular structure of crystals by X-ray structural analysis, electron-diffraction study, and neutron-diffraction study. These techniques rest on the theory of the diffraction of waves in crystals. Methods of optical spectroscopy are also used. These include infrared spectroscopy, nuclear-magnetic resonance, and electron paramagnetic resonance. The crystal structure has been studied for more than 20,000 chemical substances.

The laws governing the relative arrangement in crystals of atoms and the chemical bonds between them and of crystal isomophism and polymorphism are the subject of crystal chemistry. The study of biological crystals has made it possible to determine the structure of the giant molecules of proteins and nucleic acids. This has made an important contribution to molecular biology.

An important branch of crystallography is the theory and experimental study of nucleation and crystal growth. Crystallography makes use in this of the general principles of thermodynamics and the laws of phase transitions and surface phenomena. It takes into account the interaction of the crystal with its medium, the anisotropy of its properties, and the atomic and molecular structure of the crystalline substance.

The crystallography of real crystals is developing as an independent branch of crystallography. It involves the study of the various violations of the ideal crystal lattice, including point defects, dislocations, and other of the defects that arise during crystal growth or various reactions and that determine many of the properties of real crystals.

The study of the mechanical, optical, electric, and magnetic properties of crystals is the subject of crystal physics, which relates crystallography to solid-state physics. An important aspect of crystal physics is the consideration of crystal properties in relation to crystal symmetry and changes in these properties in relation to external influences. The uniqueness of the properties of many crystals and the sensitivity of crystals to mechanical and acoustic influences, temperature changes, electric current, electromagnetic fields, and various types of radiation have made crystallographic study important for radio technology, semiconductor electronics, quantum electronics, optics, acoustics technology, materials development, and instrument-making. The production of synthetic crystals (for example, of quartz, diamond, germanium, silicon, and ruby) is developing rapidly in this connection.

Crystallography also studies the structure and properties of various microcrystalline aggregates, such as polycrystals, fibers, and ceramics, and of substances whose atomic ordering is similar to that of crystals, such as liquid crystals and polymers. The symmetry and structural principles studied by crystallography are applied to considering the general structural principles and properties of substances in the condensed state, including amorphous bodies, liquids, polymers, biological macromolecules, and supermolecular structures (generalized crystallography).

[‚kris·tə′läg·rə·fē]
(physics)
The branch of science that deals with the geometric description of crystals and their internal arrangement.