a transformer that converts an alternating electrical current into a direct current. The majority of high-power electrical energy sources produce alternating current. However, much of the equipment in municipal and railway transportation, the chemical and radio-engineering industries, nonferrous metallurgy, and so on operates on direct current at various voltages. In the simplest case an alternating current is rectified by an electrical valve that passes current (for example, a sinusoidally alternating current) exclusively or mainly in one direction. According to the type of valves used, a distinction is made among electrical-contact, electronic, hot-cathode, gas-discharge, thyratron, mercury-arc, semiconductor, and thyristor types.

Current-rectifier circuits are classified as half-wave, full-wave with a neutral lead, and bridge types. A half-wave rectifier circuit single-phase current is shown in Figure I, a. The principal components are a transformer T, a valve V, and a ripple filter R. The voltage U1 (usually sinusoidal) from an alternating current source is passed through the transformer T to the valve V. The current J flows in the load RL only when voltage of positive polarity is supplied—that is, when V is open. The capacitor C is charged by the positive half-waves of the pulsating current; during the intervals corresponding to the time of the negative half-waves, it is discharged into the load. In this way the pulsating current is smoothed or aver-aged.

Half-wave, single-phase current-rectifier circuits are used mainly in low-power equipment with a capacitive or inductive ripple filter. The chief advantage is the simplicity and small number of valves; the disadvantages are the large pulsations of the rectified voltage and the high reverse voltage at the valves (with a capacitor filter).

The transformer used in a full-wave current-rectifier circuit (Figure 1, b) has a midpoint in the secondary winding. Owing to such a connection of the winding with the valves, a rectified current is produced on both halves of the alternating-current wave. The frequencies of the rectified-current pulsations are twice those of a half-wave current rectifier (thus, if U1 is a voltage at the industrial frequency of 50 Hz, the pulsation frequency of the load current will be 100 Hz), which facilitates the smoothing action. The bridge current-rectifier circuit (Figure 1, c) is also a full-wave type, but the secondary winding of the transformer is constructed without a midpoint and has half as many turns as the secondary winding of the transformer in Figure 1, b. Added smoothing of the rectified current is provided in these circuits by inductive-capacitor or resistive-capacitor filters. The current-rectifier circuits shown are generally used in power-supply systems for equipment that require no more than several kilowatts (radio receivers, television sets, and some automatic and remote-control equipment), and only in particular cases for high-power (up to a thousand kilowatts) equipment (such as motors for electric locomotives). There are some current rectifiers that multiply the rectified voltage in addition to providing rectified current. Voltage-multiplier circuits are commonly used in high voltage apparatus designed for testing electrical insulation, in X-ray apparatus, in cathode-ray oscillographs, and so on. 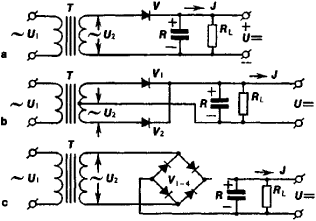 In three-phase circuits for supplying high-power industrial equipment three-phase current rectifiers are used to avoid unsymmetrical loading of the power system. The primary winding of the transformer in such current rectifiers is connected either as a star or as a delta. Half-wave or bridge rectifiers may have three, six, 12, 18, or more phases depending on the number of secondary transformer windings. A three-phase half-wave circuit is shown in Figure 2, a. The transformer’s primary winding has a delta connection, and the secondary has a star connection. The phase currents i1, i2 and i3 are rectified and are added to form the output current J. In the bridge three-phase circuit (Figure 2, b), both the primary and secondary windings of the transformer have star connections. The chief advantages of this are the same as for single-phase current-rectifier circuits. Figure 2. Circuits of three-phase current rectifiers: (a) half-wave, (b) full-wave.