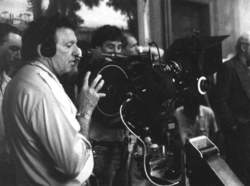 Dan Curtis, the producer-director who developed the Dark Shadows television series, was born in 1928, in Connecticut. His first work in television was as a salesman for MCA. A sports buff, he sold CBS on doing a show called CBS Golf Classic, which is best remembered for live microphones that Curtis had the golfers wear; the show won an Emmy Award in 1965. The success of the show helped Curtis become an independent producer. He decided that soap operas were a good field, and began to think about developing a daytime show.

The initial idea for Dark Shadows began to take shape after a vivid dream that Curtis had. It concerned a young woman traveling by train to a new job as a governess at an old place in New England. The dream concluded with the girl standing at a railroad station. Curtis described his dream to officials at ABC, and they risked a small budget to begin development. He gathered a team to put together what would become a daytime serial with a gothic flavor. Over several years, Dark Shadows evolved from the original idea. As the story line matured, it centered on the Collins family of a mythical fishing village called Collinsport, Maine. The young woman from Curtis’s dream became Victoria Winters, an orphan in search of her past, which she believed lay in New England. An early story line concerned a man she met on the train as she headed for her new job. He accused one of the Collins family of lying at a trial in which he was convicted and sent to prison. The show went on the air on June 27, 1966. At the time, there was no mention of vampirism or any thought of a vampire character. It was only later that when the show was threatened by low ratings that supernatural elements in the form of ghosts were added. They helped to raise the ratings, but not enough. In the winter of 1966–67, with little hope that the show would survive, Curtis made a radical decision. He had the writers create a vampire character. If the show failed after that, he reasoned, at least he would have had fun. The vampire, Barnabas Collins, made his first appearance in April 1967. The response was enormous, and by the summer, both Curtis and ABC realized they had a hit. As the show steadily rose in the ratings, Curtis borrowed the cast and created the first of two movies with MGM based on the show, House of Dark Shadows (1970). The following year a second feature, Night of Dark Shadows, was produced.

Due to low ratings, the original Dark Shadows daytime series ended in 1971, though it went into syndication several years later. Meanwhile, Curtis allowed his interest in vampires to influence his future projects. At the same time he began a fruitful relationship with horror writer Richard Matheson, who would write the scripts for a number of Curtis’s productions through the decade. In 1972 he worked with ABC to produce The Night Stalker, a Matheson script concerning a reporter (Carl Kolchak, played by Darren McGavin) who discovered a vampire operating in Seattle. The show became the most watched made-for-television movie to that date. ABC then had Curtis produce and direct the sequel, The Night Strangler, based on “Jack the Ripper” themes. The two movies led to a television series based on the Kolchak character. Curtis and his company, Dan Curtis Productions, went on to produce other television horror movies, including The Norliss Tapes (1973) and Scream of the Wolf (1974).

Curtis still had an interest in vampires, however, and in 1973 decided to produce a new version of Dracula. He chose veteran actor Jack Palance as its villain star, and Matheson as his writer. He also wanted to bypass the stage play that had been the basis for both the Bela Lugosi movie in 1931 and the more recent Horror of Dracula from Hammer Films. The script drew on fresh research on Vlad the Impaler, the fifteenth-century Wallachian prince thought of as the original Dracula. In the end, Curtis’s Dracula was driven to reclaim his long-lost love whom he saw reborn in the person of Jonathan Harker‘s fiance. This need took him to England. At the same time, he was under attack from vampire hunter Abraham Van Helsing (played by Nigel Davenport), and their personal battle formed the second dynamic of the script.

In 1975, Curtis brought to television a movie, Trilogy of Terror, composed of three of Matheson’s short stories. It was followed the next year with a similar horror collection, Dead of Night, which included Matheson’s story, “No Such Thing as a Vampire.” A successful producer who had found his niche in developing made-for-television movies, Curtis reached a new high in the next decade with the production of two very successful TV miniseries. The Winds of War (1983) and its sequel, War and Remembrance (1988–89), were based on the books of Herman Wouk. Curtis’s productions were thus diversified, only occasionally returning to the horror genre. However, the continuing popularity of Dark Shadows in syndication suggested the possibility of its revival. In 1990 Curtis sold the idea of a prime-time Dark Shadows series to NBC. With a new set and a new cast, a pilot show was filmed. Based on the old series, it began with the awakening of Barnabas Collins and his entrance into the Collins household. From there—while keeping the basic framework of the old series—the story line developed in novel directions. The series aired in early 1991 but, seemingly due to the outbreak of the Gulf War, did not make the ratings cut and was cancelled after only 12 episodes. In the meantime, Innovation Comics began production of a comic book based on the new series. The comic was a success, and the new story line and characters continued into 1994 when Innovation ceased operation.

Curtis continued as a celebrity among the very loyal fans of Dark Shadows, but was himself upset that he was remembered more for the series than for some of his other work. He died March 27, 2006 at the age of 78.