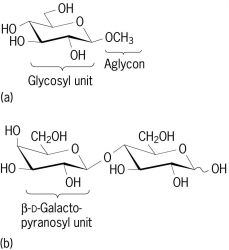 [′glī·kə‚sīd]
(biochemistry)
A compound that yields on hydrolysis a sugar (glucose, galactose) and an aglycon; many of the glycosides are therapeutically valuable.
McGraw-Hill Dictionary of Scientific & Technical Terms, 6E, Copyright © 2003 by The McGraw-Hill Companies, Inc.