Derivatives of nucleic acids that control the activity of several proteins within cells to regulate and coordinate metabolism. They are members of a group of molecules known as intracellular second messengers; their levels are regulated by hormones and neurotransmitters, which are the extracellular first messengers in a regulatory pathway. Cyclic nucleotides are found naturally in all living cells.

Two major forms of cyclic nucleotides are characterized: 3′,5′-cyclic adenosine monophosphate (cyclic AMP or cAMP) and 3′,5′-cyclic guanosine monophosphate (cyclic GMP or cGMP). Like all nucleotides, cAMP and cGMP contain three functional groups: a nitrogenous aromatic base (adenine or guanine), a sugar (ribose), and a phosphate. Cyclic nucleotides differ from other nucleotides in that the phosphate group is linked to two different hydroxyl (3′ and 5′) groups of the ribose sugar and hence forms a cyclic ring. This cyclic conformation allows cAMP and cGMP to bind to proteins to which other nucleotides cannot.

In bacteria, cAMP can bind to a fourth type of protein, which can also bind to deoxyribonucleic acid (DNA). This catabolite gene activator protein (CAP) binds to specific bacterial DNA sequences, stimulating the rate at which DNA is copied into ribonucleic acid (RNA) and increasing the amount of key metabolic enzymes in the bacteria.

In humans, cyclic nucleotides acting as second messengers play a key role in many vital processes and some diseases. For example, in the brain, cAMP and possibly cGMP are critical in the formation of both long-term and short-term memory. In the liver, cAMP coordinates the function of many metabolic enzymes to control the level of glucose and other nutrients in the bloodstream. See Adenosine triphosphate (ATP), Enzyme, Nucleic acid, Nucleoprotein, Nucleotide, Protein

nucleotides in whose molecules the phosphoric-acid residue, bonded to the ribose carbon atoms in the 5’ and 3’ positions, forms a ring (seeNUCLEOTIDES); universal regulators of biochemical processes in living cells.

Cyclic 3’,5’-adenosine monophosphate (cyclic AMP), a white powder that is readily soluble in water, is the best studied cyclic nucleotide. It was discovered in 1957 by the American biochemist E. Sutherland and his co-workers during the study of the activation mechanism of the liver enzyme phosphorylase by the hormones glucagon and epinephrine.

In animal and human tissues, cyclic AMP serves as a mediator in the accomplishment of the multiple functions of different hormones and other biologically active compounds, such as certain mediators, toxins, and lactins. In bacteria, when easily assimilated compounds, such as glucose, are lacking in the environment, the content of cyclic AMP in the cell increases, which leads to the biosynthesis of adaptive, or induced, enzymes necessary for the assimilation of other sources of nutrition. The cyclic AMP level in the cells of Salmonella typhimurium determines the fate of a phage that has found its way into a cell; at high concentrations of cyclic AMP, lysogenization of the bacterial culture occurs, while at low concentrations, the phase induces lysis of the culture. In the myxomycete Dictyostelium discoideum, cyclic AMP acts as an attractant, drawing the individual cells to one another. In other plants, it mediates the effect of phytochrome on the synthesis of beta-cyonine pigments, for example, in Amaranthus paniculatus.

The connection between a hormone or other chemical signal (first messenger) and cyclic AMP (second messenger) is established by the adenylyl cyclase complex, which includes a receptor, which is specific for a particular hormone or other biologically active compound and which is located on the outer side of the cell membrane, and by adenyl cyclase, which is located on the inner side of the membrane. The hormone, by reacting with the receptor, in many cases activates adenylyl cyclase, which catalyzes the biosynthesis of cyclic AMP. The concentration of cyclic AMP thus formed in the cell exceeds the concentration of the hormone acting on the cell by a factor of 100. 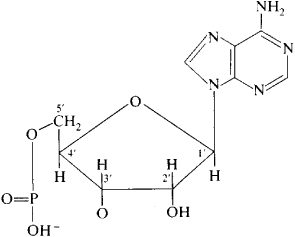 The basis of the mechanism of the action of cyclic AMP in animal and human tissues lies in its interaction with protein kinases—enzymes displaying activity in the presence of cyclic AMP (see Figure 1). The binding of cyclic AMP to the regulator subunit of protein kinase leads to the dissociation of the enzyme and activation of its catalytic subunit, which, freed from its regulator subunit, is capable of phosphorylating specific proteins, including enzymes. The change in the properties of these macro-molecules by phosphorylation also changes the corresponding cell function. For example, the action of epinephrine on liver cells is accompanied by the phosphorylation of two enzymes— phosphorylase and glycogen synthetase. Phosphorylase is thus activated, which leads to the rapid hydrolysis of glycogen, the storage substance of the liver. With the onset of glycogen hydrolysis, further synthesis of glycogen ceases, since the enzyme that participates in its formation, glycogen synthetase, loses its activity upon phosphorylation by protein kinase. The same hormone, acting through the cyclic AMP mediator, induces different functional responses in different tissues, depending on the features of the tissues.

In cases when an organism is under stress, when energy requirements are very high, the adrenal medulla forms the hormone epinephrine in increased amounts. In the liver, epinephrine causes the active splitting (phosphorolysis) of glycogen, the formation of phosphorus esters of glucose, and the introduction of large amounts of glucose into the blood. In fatty tissue, increased epinephrine leads to the hydrolysis of lipids. Upon reaching the heart, epinephrine increases the contractile strength of the heart muscle, increases blood circulation, and improves the nutrition of tissues by mobilizing all of the organism’s energy. Cyclic AMP also plays a role in the morphology, mobility, and pigmentation of cells, in hematopoiesis, in cell immunity, and in viral infections. 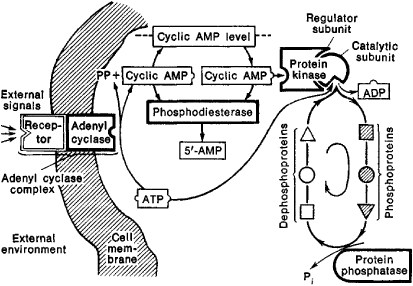 Figure 1. Scheme of the mechanism of operation of cyclic AMP in the cells of animals and plants: (ATP) adenosine triphosphate, (ADP) adenosine diphosphate, (Pi) phosphate, and (PP) pyrophosphate

Some mediators, such as acetylcholine, may accelerate the formation of another cyclic nucleotide, 3’,5’-guanosine monophosphate (cyclic GMP), which is synthesized in the cell from guanosine triphosphate upon activation of the enzyme guanylate cyclase, component of the guanylate cyclase complex located in the cell membrane. Many effects of cyclic GMP are characteristically directly opposite the effects of cyclic AMP. The antagonistic relationship of the cyclic nucleotides is most evident in complex systems, when the diverse modification of many proteins is required to regulate cell function; this modification is accomplished by the coordinated action of alternately activated cyclic AMP-dependent and cyclic GMP-dependent protein kinases.

In bacteria, cyclic AMP, by combining with a nonenzyme receptor protein, adds to DNA and permits the enzyme RNA polymerase to initiate transcription of the gene responsible for the synthesis of an induced enzyme (seeOPERON). Thus, the mechanisms for the actions of cyclic AMP in bacteria and in animal and human tissues differ in principle.

The study of the role of cyclic nucleotides in living cells, one of the most rapidly developing disciplines in biochemistry, has already made significant contributions to the understanding of the mechanisms of biological regulation at the molecular level.

Feedback
Flashcards & Bookmarks ?
Please log in or register to use Flashcards and Bookmarks. You can also log in with
Flashcards ?
My bookmarks ?
+ Add current page to bookmarks
Mentioned in ?
References in periodicals archive ?
Phosphodiesterases decompose the cyclic nucleotides, cAMP and cGMP, to inactivate 57-AMP and 5, -GMP, respectively.
Sildenafil Can Affect Innate and Adaptive Immune System in Both Experimental Animals and Patients
Selective inhibition of cyclic nucleotide phosphodiesterases of human, bovine and rat aorta.
Endothelium-independent vasorelaxant effect of a Berberis orthobotrys root extract via inhibition of phosphodiesterases in the porcine coronary artery
PDE are ubiquitous enzymes responsible for the degradation of cyclic nucleotides, whose activity is dependent on substrate, kinetic properties, and cellular and subcellular distribution of the 11 known families.
Stimulation of neural stem cell proliferation by inhibition of phosphodiesterase 5
For platelets from both lean and obese study participants, we investigated (a) sensitivity to the antiaggregatory effects of the cyclic nucleotide analogs 8-pCPT-cAMP and 8-pCPT-cGMP on ADP-induced platelet aggregation; (b) PKA and PKG concentrations; and (c) concentrations of total VASP and of VASP phosphorylation in response to 8-pCPT-cAMP and 8-pCPT-cGMP.
Platelet resistance to the antiaggregatory cyclic nucleotides in central obesity involves reduced phosphorylation of vasodilator-stimulated phosphoprotein
Cyclic nucleotide metabolism in mouse epididymal spermatozoa during capacitation in vitro.
Efecto del db-cAMP sobre el desarrollo embrionario de ovocitos bovinos fecundados con semen sexado
In cyclic nucleotide assays, baicalin enhanced both cAMP and cGMP levels in MAs.
Baicalin, a flavonoid from Scutellaria baicalensis Georgi, activates large-conductance [Ca.sup.2+] -activated [K.sup.+] channels via cyclic nucleotide-dependent protein kinases in mesenteric artery
Cyclic nucleotide response element binding (CREB) protein activation is involved in K562 erythroleukemia cells differentiation.
Ionizing radiation induces apoptotic signal through protein kinase C[delta] (delta) and survival signal through Akt and cyclic-nucleotide response element-binding protein (CREB) in Jurkat T cells
Where PDE5 breaks down cyclic nucleotides in response to the vital signaling molecule nitric oxide (NO), PDE1 affects cyclic nucleotide pathways sensitive to Calcium (Ca2+), another major player in cardiac disease, according to the authors.
Viagra relatives could minimize abnormally large hearts
In presenting these conceptual and technical approaches to cyclic nucleotide phosphodiesterases (PDEs), Lugnier (pharmacology and the physico-chemistry of cellular and molecular interactions, Centre National de la Recherche Scientifique, U.
Phosphodiesterase methods and protocols
A cyclic nucleotide dispensation approach with iterative addition of the nucleotides as well as a programmed approach was evaluated.
Pyrosequencing as an alternative to single-strand conformation polymorphism analysis for detection of N-ras mutations in human melanoma metastases
Cyclic AMP (cAMP) is an important second messenger that activates protein kinase A (PKA), cyclic nucleotide gated (CNG) channels, and exchange protein activated by cAMP (Epac) and regulates cellular and physiological functions.
Hyperspectral FRET imaging and analysis approaches to determine cAMP compartmentalization in PMVECs
In the previous study, Insel's group had discovered that among a group of enzymes, cyclic nucleotide phosphodiesterases, one of the phosphodiesterases, PDE7B, was 10 times higher in CLL patients than in healthy individuals.
New biomarker that may help predict leukemia aggressiveness identified