galvanometer (gălˌvənŏmˈətər), instrument used to determine the presence, direction, and strength of an electric current in a conductor. All galvanometers are based upon the discovery by Hans C. Oersted that a magnetic needle is deflected by the presence of an electric current in a nearby conductor. When an electric current is passing through the conductor, the magnetic needle tends to turn at right angles to the conductor so that its direction is parallel to the lines of induction around the conductor and its north pole points in the direction in which these lines of induction flow. In general, the extent to which the needle turns is dependent upon the strength of the current. In the first galvanometers, a freely turning magnetic needle was hung in a coil of wire; in later versions the magnet was fixed and the coil made movable. Modern galvanometers are of this movable-coil type and are called d'Arsonval galvanometers (after Arsène d'Arsonval, a French physicist). If a pointer is attached to the moving coil so that it passes over a suitably calibrated scale, the galvanometer can be used to measure quantitatively the current passing through it. Such calibrated galvanometers are used in many electrical measuring devices. The DC ammeter, an instrument for measuring direct current, often consists of a calibrated galvanometer through which the current to be measured is made to pass. Since heavy currents would damage the galvanometer, a bypass, or shunt, is provided so that only a certain known percentage of the current passes through the galvanometer. By measuring the known percentage of the current, one arrives at the total current. The DC voltmeter, which can measure direct voltage, consists of a calibrated galvanometer connected in series (see electric circuit) with a high resistance. To measure the voltage between two points, one connects the voltmeter between them. The current through the galvanometer (and hence the pointer reading) is then proportional to the voltage (see Ohm's law).

A device for indicating very small electric currents. Although the deflection of a galvanometer results from current in the moving coil, the voltage in a closed circuit producing this current is frequently the quantity of interest to the user. In this mode, galvanometers are used to detect a null or an unbalanced condition in a bridge or potentiometer circuit. Electronic instruments that employ amplifying circuits to achieve sensitivities approaching the nanovolt level are also used as balance detectors in bridge circuits. However, in applications where extreme sensitivity and high rejection of ac signals are required, a galvanometer in combination with a photocell amplifier is to be preferred.

Galvanometers may also be used ballistically to integrate a transient current, as from the discharge of a capacitor, or a transient voltage, as produced when a coil moves relative to a magnetic field. See Current measurement, Voltage measurement

The d'Arsonval galvanometer is the most common type and is widely used. Its indicating system consists of a light coil of wire suspended from a copper or gold ribbon a few thousandths of an inch wide and less than 0.001 in. (0.025 mm) thick. This coil, free to rotate in the radial field between the shaped pole pieces of a permanent magnet, carries a small mirror which serves as an optical pointer and indicates the coil position by reflecting a light beam onto a fixed scale. Current is conducted to and from the coil by the suspension ribbons. The torque which deflects the indicating element is produced by the reaction of the coil current with the magnetic field in which it is suspended.

Voltage sensitivity is of importance in applications where the galvanometer serves as the detector of unbalance in a bridge or potentiometer network. The energy of motion in the indicating system must be dissipated and the system brought to rest in order for the deflection to be evaluated. This process, common to all indicating systems in which equilibrium must be achieved between a driving torque and a restoring torque, is called damping. See Damping

The limitations reached in improving a galvanometer's resolution by increasing its scale length or using multiple reflections can be overcome by operating the galvanometer in its equilibrium position by using a negative-feedback network. In this system the beam of light reflected from the galvanometer mirror is directed onto a pair of photocells connected in series opposition (see illustration). As the galvanometer coil rotates, the light received on one photocell increases while the other decreases, and an amplified output current is produced whose sign and magnitude depend on the direction and amount of the coil deflection, respectively. The photocell output current is monitored by an external indicator and is approximately 1800 times the galvanometer input current. This photocell output also provides a negative-feedback current to servo the galvanometer at its equilibrium position, so that the linearity and input resistance of the system are increased. In such an arrangement it is frequently possible to approach rather closely the theoretical limit of resolution of angular motion imposed by the brownian motion of the coil, or by the Johnson noise of the circuit connected to the galvanometer. In a low-resistance galvanometer this theoretical resolution may be about 0.001 μV. See Brownian movement, Kinetic theory of matter

A galvanometer is an extremely efficient low-pass filter, and it is still the most sensitive low-level detector at input impedances of 1 k&OHgr; or less. At higher input impedances, chopper-stabilized amplifiers, called nanovoltmeters, exhibit better resolution, noise, and drift characteristics than galvanometers. These instruments modulate the input dc signal by using a chopper (mechanical contact, transistor, or photocell switching), then amplify the signal by traditional ac techniques to achieve sensitivities of 10 nV or less. State-of-the-art digital voltmeters are now available with nanovolt resolution and are useful as low-level detectors. See Ammeter, Electrical measurements, Electrometer, Voltmeter

a highly sensitive electrical measuring instrument that responds to very low current or voltage values. Galvanometers are most commonly used as zero current indicators—that is, devices to indicate the absence of current or voltage in an electrical circuit. After preliminary determination of the constant for an instrument (the value of a scale division), they are also used to measure small currents and voltages.

Both DC and AC galvanometers exist. The first DC galvanometers were made in the 1820’s and operated on the principle of the permanent-magnet system of instruments. They consist of a magnetic needle suspended on a fine thread within a coil of wire. When no current flows in the coil, the needle orients itself along the local magnetic meridian. The appearance of a current causes the needle to deviate from its initial position. In the 19th century a great variety of galvanometer designs with a movable magnetic needle were developed and were extensively utilized for scientific studies of electromagnetic phenomena. For example, in 1886, F. Kohlrausch used such an instrument to determine with great accuracy the electrochemical equivalent of silver. 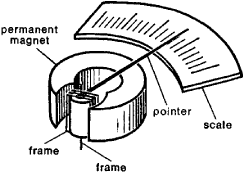 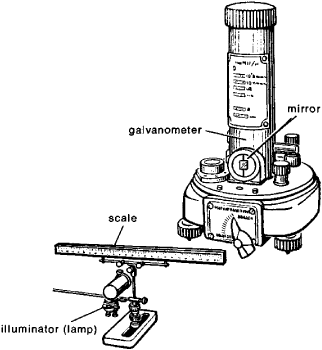 passes through a winding on the electromagnet and creates an alternating magnetic field, which is superimposed on the constant magnetic field from the permanent magnet. The resultant field changes its direction with the frequency of the alternating current and causes the vane to vibrate; the sharp image of the illuminated slit on the scale thereby becomes blurred into a luminous band. The width of the band is proportional to the strength of the alternating current in the winding of the electromagnet. The maximum sensitivity of a vibration galvanometer is produced when the natural vibration frequency of the movable parts equals the frequency of the alternating current, and for this reason all such galvanometers have devices for changing the natural vibration frequency so that the moving part can be tuned to resonate with the test current. These types of galvanometers are manufactured for operation up to frequencies no higher than 5 kilohertz (kHz).

A thermogalvanometer is an AC galvanometer with a thermoconverter. The galvanometer has the mechanism of a permanent-magnet galvanometer, with a single-turn moving frame. The halves of this turn are made of different metals, forming a thermocouple. A heater located close to one of the junctions carries the alternating current to be measured. The thermocurrent generated in the frame deflects it from the zero position. This galvanometer can be operated at frequencies above 5 kHz.

[‚gal·və′näm·əd·ər]
(engineering)
An instrument for indicating or measuring a small electric current by means of a mechanical motion derived from electromagnetic or electrodynamic forces produced by the current.
McGraw-Hill Dictionary of Scientific & Technical Terms, 6E, Copyright © 2003 by The McGraw-Hill Companies, Inc.