Dalai Lama (däˈlī läˈmə) [Tibetan,=oceanic teacher], title of one of the main leaders of Tibetan Buddhism. Believed like his predecessors to be the incarnation of the Bodhisattva Avalokiteshvara, the 14th Dalai Lama, Tenzin Gyatso, 1935–, was installed in 1940. In 1959, following a Tibetan revolt against Chinese rule (see Tibet), he fled into exile. He has traveled widely, pleading the Tibetan cause, and was the recipient of the 1989 Nobel Peace Prize and the 2012 Templeton Prize. He stepped down as the political leader of the Tibetan government-in-exile in 2011. 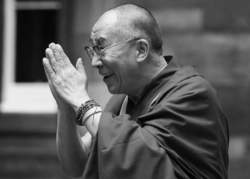 Feedback
Flashcards & Bookmarks ?
Please log in or register to use Flashcards and Bookmarks. You can also log in with
Flashcards ?
My bookmarks ?
+ Add current page to bookmarks
Mentioned in ?
References in periodicals archive ?
Is The Dalai Lama's Ethics A Form Of Perfectionist Consequentialism?
The Dalai Lama and the nature of Buddhist ethics
The Dalai Lama fled Tibet following a failed uprising against Chinese rule in 1959 and has since been based with his followers in India's northern Himachal Pradesh State.
China protests Dalai Lama's Mongolia visit
In Tokyo, Chief Cabinet Secretary Osamu Fujimura said in a news conference that he told Nagashima to take heed of the government's stance, which is not to have its officials make any contact with the Dalai Lama and for the Dalai Lama not to engage in political activities while in Japan.
China criticizes Japan over meeting with Dalai Lama
Popularly known as the Middle Way and only grudgingly accepted by the younger generation of Tibetans, the Dalai Lama's proposals have been rejected by China which is deeply suspicious of his intentions.
Tibetans' struggle is far from over
The Dalai Lama leans neither right nor left but travels down the middle.
Hangin' with the Dalai Lama
Mr Wang, the director general at the government of Tibet Autonomous Region, said the current Dalai Lama was recognized by Beijing and his successor must be found through the "draw of lots in golden urn process" within China.
Selection of the next Dalai Lama - A test of New Delhi-Beijing ties
He has been regarded as the most influential Tibetan Buddhist leader after the Dalai Lama in a recent statement from New York.
Quest for a New Leader
Gelunas was cautious about the possibility of the lawmakers meeting with the Dalai Lama in the parliament building.
Lithuania's leaders don't plan to meet with Dalai Lama, but some MPs do
"I feel blessed once again as His Holiness touched me and bumped his head with my head," Das told reporters after he was honoured by the leader at an event in Dharamsala to mark the 60th anniversary of the Dalai Lama's arrival in India.
Dalai Lama embraces trooper who escorted him in 1959
Another Dalai Lama follower from Bhutan, Srinpaldin is happy she could make it to Tawang as they don't get to listen to him there.
Devotees from Bhutan climb mountains to see Dalai Lama
Speaking to Oliver at his residence in the northern Indian town of Dharamsala Sunday, the Dalai Lama hinted he might be the last reincarnation of the Dalai Lama, which is the highest figure in Tibetan Buddhism.
Dalai Lama Slams Chinese Hardliners To John Oliver
A Chinese official has denounced the Dalai Lama for calling for dialogue with Islamic State militants, saying that it exposed the Tibetan spiritual leader's 'sympathy' for the group, state media said on Wednesday.
China denounces Dalai Lama's 'sympathy' for Islamic State