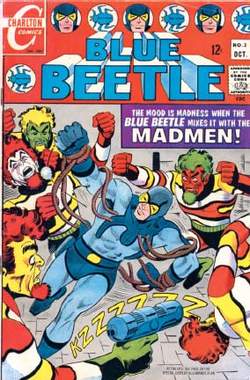 The Blue Beetle was the second superhero to have his own comic, and went on to more changes and publishers (six in all) than almost any other character in comics history. He also spanned the quality spectrum from excellent to absolutely awful. In 1939, Victor Fox was an accountant at DC Comics who had noticed with envy the profits coming in from the company’s new Superman character. Moving to a different floor in the same building, he set up his own company, Fox Comics, and hired the Will Eisner/Jerry Iger creative shop to provide the story and artwork for his new venture. Unfortunately, their first character, Wonder Man, was immediately hit by a lawsuit from DC, and so they quickly dreamed up a new hero, the Blue Beetle. In his first appearance (drawn by Charles Nicholas in Mystery Men Comics #1), the Beetle was little more than a Green Hornet clone, but he was soon given a blue chain mail costume with a mask and hood topped off with antennae; the latter sadly disappeared by his fourth strip.

In his civilian identity, the Beetle was rookie cop Dan Garret, whose athletic prowess made him a powerful hero as soon as he donned his costume—though the gun he toted in the early days probably helped. As far as superpowers go, he really had none, although he often projected his beetle insignia on dark walls. Soon he was given a girlfriend, reporter Joan Mason, and a special vitamin mixture (2X) that beefed up his muscles. The Blue Beetle briefly had his own radio show and newspaper strip, but the poor overall quality of Fox’s product led the company to close shop in 1942. A few months later, the Beetle was back on the stands, this time published by Fox’s printers, Holyoke, who (historians believe) took over the character in lieu of debts. The Holyoke years saw the character gain a sidekick called Spunky, which didn’t help, as the strip got even worse. By 1944, Victor Fox had come back into publishing and took over the comic again for a series of catastrophically awful strips in which the Beetle could suddenly fly, and also mysteriously acquired the Beetlemobile and the Beetleboat.

One of the hottest comics of the postwar years was the ultraviolent Crime Does Not Pay, and in 1946 Fox decided to get a piece of that action. This new direction concentrated more on the Blue Beetle’s shapely girlfriend, and featured a series of so-called “true crime stories,” which were little more than an excuse for acres of flesh and gallons of blood. Story titles such as “Satan’s Circus,” “The Vanishing Nude,” and “House of a Thousand Corpses” tell it all. By the end of the decade, Fox had left comics forever, but the Beetle was soon picked up by bargain-basement publisher Charlton, who brought out a few nondescript issues in 1955. Somehow, I.W. Comics got their hands on some old artwork and, in 1964, released it in two issues inexplicably retitled The Human Fly. That same year, Charlton was back again with a ten-issue run of staggeringly silly strips in which the beefed-up hero appeared to resemble the Pillsbury Doughboy.

Then something strange happened: The Blue Beetle finally starred in some good stories—very good stories, in fact. Soon after leaving his astonishingly successful Spider-Man comic, artist Steve Ditko moved over to Charlton and completely revamped the Beetle. Ditko’s hero was now scientist Ted Kord and he had a stylish new costume, his own designer flying vehicle (in the shape of a beetle, of course), and genuinely exciting, well-drawn stories. Inexplicably, despite action scenes that rivaled Spider-Man at its best, the public simply wasn’t interested, and the comic was canceled after barely a year. (The Ted Kord Blue Beetle was eventually murdered by his former ally, businessman Maxwell Lord, in Countdown to Infinite Crisis #1 [May 2005]).

A generation later, the few fans who bought Ditko’s issues were creating comics of their own, and the first of many revivals saw print in 1981 in the semi-pro Charlton Bullseye. A few years later, another fan publication, Americomics, pitted the two Blue Beetles against each other in pitched battle, before things came full circle and DC Comics (the impetus for the Beetle’s creation in the first place) bought the rights to the character. For much of the 1980s, he starred in amiable yarns in his own comic and enjoyed great success in one of several incarnations of the Justice League. He was frequently teamed with his best friend in the League, Booster Gold, the time-traveling hero from the twenty-fifth century, who was created by Dan Jurgens in Booster Gold #1 (February 1986).

Jaime Reyes, a Latino teenager who first appeared in Infinite Crisis #3 (Feb. 2006), found the magical blue beetle scarab, which transformed him into the third Blue Beetle two issues later. The new Blue Beetle starred in his own comic (from 2006-2008) and in a backup feature in Booster Gold (starting in 2009). He has also joined the Teen Titans. DC launched a new Blue Beetle comic, starring the Jaime Reyes version, written by Tony Bedard with art by Ig Guara and Ruy Jose, in September 2011.

The third Blue Beetle has appeared in numerous episodes of the animated television series Batman: The Brave and the Bold. The new Blue Beetle also appeared in the live action Smallville series in the same episode as Booster Gold and Ted Kord. —DAR & PS

Feedback
Flashcards & Bookmarks ?
Please log in or register to use Flashcards and Bookmarks. You can also log in with
Flashcards ?
My bookmarks ?
+ Add current page to bookmarks
Mentioned in ?
References in periodicals archive ?
Pat is survived by his wife, Karen Garrett (nee Tonkin); his children, Mike (Lisa) Garrett and Maggie (Rob) Stone; his grandchildren, Caitlin and Luke Garrett, and Lily and Ethan Stone; and his siblings, Teresa (Dale) Galis, Becky (Jim) Harris and Dan Garrett. His visitation will be held on Friday, September 14, from 4:00pm to 8:00pm at Davenport Family Funeral Home and Crematory, 419 E.
GARRETT
But IT teams that already have full plates may struggle to develop mobile policies quickly, says Dan Garrett, principal and health information technology practice leader at New York-based PwC Consulting.
The BYOD revolution: the 'bring your own device' departments scrambling to concept has many it develop mobile tech policies
George Ennor, George White, Len Poole, Dave Cox, Dan Garrett, Chris Gundry, Alan Smith, Steve Delve and Derrick Shaw were among those to benefit from Graham's meticulous coaching, followed shortly after by the likes of Mike Roberts, Mick Connaughton, Malcolm Hanover, Bob Toseland, Alastair Down, Bryan Pugh, Terry McGovern, Neil Cook, Jamie Lambie, John McCririck and Jeremy Chapman.
Life's Pied Piper was an outstanding motivator
This week's SoundBytes concert features music of jazz artist Bill Frisell, with Bill Marsh on guitar, Josh Deutsch on trumpet, Andy Rosenburg on alto sax, Mike Ragsdale on trombone, Dan Garrett on bass and Adam Sweet on drums.
Couple of jazz concerts on tap at UO this week
"The Asheville Project showed people are more likely to take prescribed medications and track their condition when they have received blood glucose, blood pressure and cholesterol checks, and eye and foot exams," comments Dan Garrett, the foundation's senior director of medication adherence programs.
'Diabetes Ten City Challenge' asks employers to do their part
Dan Garrett of Southwest Book Recyclers spread the word among publishers, resulting in many donations, including a large truckload from Follett Campus Resources in Dallas.
On the Books: Prof. Sends pages Abroad
The experiment was supported by Dan Garrett, executive director of the North Carolina Pharmaceutical Association.
Eckerd Uses Technology to Enhance Service