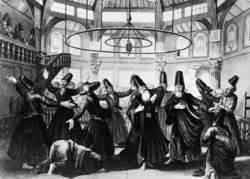 Sacred dance performed by so-called whirling dervishes, their arms extended, right palm facing up and left palm facing down, to signify energy from above passing through the body and into the earth. The Sheikh represents, the sun and the Dervishes represent the planets turning around him in the solar system of Mevlana. Fortean Picture Library.

Almost every religious tradition encompasses some kind of expression involving movement or dance. Indeed, dance may be the single oldest religious expression known to the human race. Probably the drum, in the form of a hollow log, was the first musical instrument invented. Such early drums were almost certainly used to accompany religious or ritual dancing. It is even conceivable, though we will never know for sure, that extinct relatives of humans such as the Neanderthal enjoyed sacred dance.

In Islam, followers of the mystical expression known in the West as Sufi practice a form of prayer involving dancing in tight circles while experiencing union with the divine, a spiritual ecstasy. Spectators called participants "whirling dervishes."

The Hebrew psalms often speak of "praising God with the dance." King David "danced before the Lord" when the Ark of the Covenant was brought home to Jerusalem, much to the disgust of Michal, the daughter of King Saul. You can almost hear the sarcasm dripping from her lips: "How the king of Israel has distinguished himself today, disrobing in the sight of slave girls as any vulgar fellow would!" (2 Samuel 6:20). (Michal, in response to her low rating of David's moves, was given the ultimate Hebrew Bible/Old Testament punishment by the male author of Samuel. "And Michal, daughter of Saul, had no children to the day of her death.")

The Christian tradition has either totally accepted dance or totally rejected it, depending on the source of its inspiration. If divinely inspired, dance is considered an expression of spirituality. Otherwise it is, at best, a means by which the devil traps the impressionable (as in the movie Footloose), or, at worst, an activity reserved for "pagans" (as illustrated by the obligatory "war dance" that motion-picture Indians always seem to engage in before fighting the cavalry the next day).

Sacred dance, however, is typically a matter of opposing theological expressions. On one extreme, "dancing in the aisles" is a Pentecostal tradition. When "the spirit moves," people get up and dance. At the other extreme, the liturgical dance of the formal Church comes from the controlled, rehearsed tradition of the classical ballet.

This tension has caused puzzlement in middle-of-the-road churches that simply don't know how to handle dance as a spiritual expression. Quite often when the opera Amahl and the Night Visitors, the story of the wise men and their journey to Bethlehem, is performed in church sanctuaries, the pastor puts his foot down and eliminates the rustic peasant dancing scene.

There is, however, some recent evidence that conservative opinions concerning secular dance are beginning to change. In an article entitled "Footloose," which appeared in the Boston Globe on March 30, 2003, Naomi Schaefer reported that Wheaton College, known for asking every prospective student the question, "Have you accepted Jesus Christ as your personal Savior?" has recently made national news by allowing students to dance in public as long as they are not on campus. Previous school policy of the institution called by some the "Evangelical Harvard" not only forbade dancing, but faculty could be relieved of their duties if they were seen drinking a glass of wine in a restaurant. The school's director for orientation was quoted as saying, "If there is a group still offended by dancing, it's a small minority."

Probably the most well known and imitated sacred dance is found at the American Indian pow-wow. Dance is a central component of Indian spiritual life. Even though it has been commercialized, it remains an important part of religious ceremony. Manny Twofeathers, in his book The Road to the Sundance, eloquently describes his own spiritual journey and awakening to the mysticism of sacred dance associated with the Plains tribes. Especially accessible to non-Indians is the experience John Hanson Mitchell relates in his book Ceremonial Time. In the course of his study, Mitchell discovered that the people who lived on the land tended to have a completely different conception of time than he did. In trying to understand, he invited three Indian friends to accompany him to Forge Pond, near Route 2 in central Massachusetts. The three decided to find out for themselves which of their ancestors might still be around.

Mitchell is a typical modern man who writes and edits a magazine during a normal workday. His reaction to what happened that night is one that many could identify with. In his words:

"Suddenly [Tonupasqua] rose to her feet and began to shift back and forth, her rounded body cutting off the glimmering lights of the civilized world across the lake. Nompenekit joined her, and after a minute or two, White Bird got up and began to shuffle his feet forward and backward. Then, abruptly, as if he had been seized by pain, White Bird threw up his right arm and crouched over, shouting in the high, unintelligible phrases known technically as vocables—meaningless words that traditional Indians use to accompany their dances. Crouching over, his right arm still raised, and his left arm crooked uncomfortably behind his back, he began to circle around the pipe, crossing his left leg behind his right and vice versa with short little stamps. Tonupasqua and Nompenekit swayed and shuffled for a minute longer and then they too joined in the dance, each of them taking up White Bird's long chant of vocables, interweaving the call with short grunts and shouts, and an occasional high whinny from Tonupasqua.

My first reaction was to join in; involuntarily, almost, I felt my arm go up as soon as Nompenekit joined in the dance. But with Tonupasqua's whinnying filling the air, I began to worry slightly that someone across the lake would hear the chanting and call the police. For about ten minutes I was too distracted to appreciate the spectacle, then slowly, once again, I fell in with the ceremony and would have joined the dance had I not felt that I might violate the ritual. I moved farther into the woods, sat down again to watch, and then, for some reason, began to feel dizzy and almost frightened. The reality of what was going on,

the time scales that I felt I was witnessing, seemed too vast to comprehend, too much to handle at three in the morning. I felt that I was transported back into some indistinct period in the time before this time, when Menobozho, Hobomacho, the Bear, and the other mythological creatures walked over Scratch Flat. It was not an altogether pleasant revelation. What came to the forefront there was not the brilliantly lit Scratch Flat summer landscape, but the darker side of things, the horror and the mystery of the European Paleolithic death cults, rites of passage, and yet undiscovered rituals. Dark shuffling images flashed in front of me, unspeakable primal ceremonies, scarified, painted shamans, bear priests, wolf men and ritualistic sacrifices; and for a moment I thought I saw the actual form of a fourth figure dancing there. It was shorter, thicker than the others, and by the time I recognized the form as that of an upright bear, it had disappeared.

I realized then that I was not seeing Scratch Flat anymore. I had been carried it seemed to an earlier period, transported somehow to the Mal'ta peninsula on Lake Baikal in Siberia where the tribes of American Indians are believed to have originated. Whatever I saw there was the same thing that Cotton Mather and the other Puritan ministers so feared when they first encountered the aboriginal Americans. It was the fiery worm that flew by night, the dark ecstasies and Satanic figures that lurked in the howling wilderness and tempted wayward European travelers. I found there, it seemed to me later, the most essential Paleo artifact of all, the spirit that was born in the mind of the Paleolithic hunters two hundred thousand years ago, nurtured on the Mal'ta peninsula, carried across the Behring Sea land bridge, carried across the American continent, carried through fifteen thousand years of American history, and then deposited on a point of land on an obscure pond in the drainage of the Merrimack River on the northeastern coast of North America.

Although this incident took place in the late twentieth century, it captures the ancient essence of sacred dance. As a form of liturgy, dance precedes formal, written, and recited prayers by thousands, not hundreds, of years. More than mere time separates the Australian aboriginal men's dance or the African tribal ceremony from the recitation of "Our Father, who art in heaven," intoned by a dressed-up congregation with one eye on the clock. Indeed, it is probable that the primitive feelings dance can invoke is what so frightens hierarchical religious leaders.

One of the most effective descriptions of dance and the sacred prayer of life it depicts appears in Bill Moyers's introduction to Joseph Campbell's book The Power of Myth:

In Japan for an international conference on religion, Campbell overheard another American delegate, a social philosopher from New York, say to a Shinto priest, "We've been now to a good many ceremonies and have seen quite a few of your shrines. But I don't get your ideology.

I don't get your theology." The Japanese man paused as though in deep thought and then slowly shook his head. "I don't think we have ideology," he said. "We don't have theology. We dance."

Feedback
Flashcards & Bookmarks ?
Please log in or register to use Flashcards and Bookmarks. You can also log in with
Flashcards ?
My bookmarks ?
+ Add current page to bookmarks
References in periodicals archive ?
This new edition may lead some readers to seek defining characteristics in the newly added recordings of black dance, sacred, and "pre-blues" music, rather than in the performances of the paradigmatic twelve-measure aab blues form refined on the eve of World War II.
Blues and Gospel Records: 1890-1943, 4th ed
Encyclopedia browser ?
Full browser ?
CITE
Site: Follow: Share:
Open / Close