(redirected from Darby Hickson)
The following article is from Conspiracies and Secret Societies. It is a summary of a conspiracy theory, not a statement of fact. 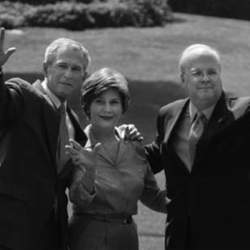 Conspiracy theorists refer to Karl Rove as “America’s Joseph Goebbels,” recalling Adolf Hitler’s chief manipulator of the media in Nazi Germany, and declare that Rove is “creepier than Nixon.”

President George W. Bush has referred to Karl Christian Rove, his senior adviser, chief political strategist, and deputy chief of staff, as “the Architect,” “the Boy Genius,” and “Turd Blossom,” the latter being a Texanism for a flower that blooms from cattle or horse droppings.

Rove’s reputation for dirty politics and conducting smear campaigns against political opponents has made Rovian a synonym for Machiavellian.

Karl Rove dropped out of college in 1971 to enter Republican politics. From that time on, he has single-mindedly pursued political power—and he has most certainly attained his goal, serving, as some have suggested, as “co-president” of the United States. At the same time, he has employed more than a few character assassinations and bags full of dirty tricks to annihilate the political competition.

In the fall of 2003 Rove became one of the central figures in an explosive conspiracy that threatened to bring about the end of his political career and the fall of the George W. Bush administration. On August 29, 2003, the retired ambassador and career diplomat Joseph C. Wilson accused Rove of leaking the identity of Wilson’s wife, Valerie Plame, as a CIA operative. When asked how he knew the leak could be traced to Rove, Wilson responded by stating that he possessed documents from a secret investigation of the State Department’s Internal Security Unit that revealed Rove’s duplicity. Wilson was a holdover from the Clinton administration, and a small clique sympathetic to Wilson and his wife had provided him with the evidence that Rove had leaked the information in retaliation for the ambassador’s criticisms of the Bush administration.

Wilson had been dispatched to Niger in February 2002 by the CIA after Vice President Dick Cheney asked the Agency to investigate whether there was substance to the report that Iraq was obtaining uranium from that African nation for nuclear weapons. Wilson had previously served as ambassador to Gabon, and in the 1970s he had been posted in Niamey, Niger’s capital. During the George H. W. Bush administration, Wilson was a senior American diplomat in Baghdad.

Wilson spent eight days investigating the uranium charges and found them to be completely untrue. He conferred with the U.S. ambassador to Niger, Barbro Owens-Kirkpatrick, who told him that she thought she had already debunked allegations of uranium sales to Iraq in her reports to Washington. When he returned to the United States, Wilson made it clear to Cheney, the CIA, the State Department, and the National Security Council that he had found no evidence to support the rumors. In spite of Wilson’s strenuous denials, President George W. Bush used the Niger uranium claims to dramatic effect in his 2003 State of the Union Address.

On July 6, 2003, the New York Times published an opinion piece by Wilson in which he intimated that the Bush administration had deliberately misrepresented intelligence findings about Iraq-Niger uranium dealings to justify the war against Iraq. Five days later CIA director George Tenet issued a press release admitting that the Agency should never have permitted the “sixteen words” used by President Bush in the State of the Union Address to suggest an Iraq-Niger uranium connection. Such a “mistake” on the part of the CIA allowed Bush to take the nation to war.

On July 14 the syndicated columnist Robert Novak wrote an article attempting to make light of Wilson’s findings and, in the same column, revealed that the ambassador’s wife, Valerie Plame, was a CIA operative working on detecting weapons of mass destruction. Almost from the first, rumors circulated that Novak’s source for the information was Karl Rove, who under orders or under his own counsel struck back at Ambassador Wilson for his attacks on the Bush presidency. Both Wilson and various current and former CIA officials asserted that this leak ruined Ms. Plame’s nearly twenty-year career as an undercover agent. Even more seriously, it endangered her life and the lives of the undercover CIA network of which she was an integral part. Some researchers have claimed that the leak to Novak has resulted in the deaths of more than seventy CIA agents overseas.

William Rivers Pitt, writing in Truthout Perspective, quotes Ray McGovern, for twenty-seven years a senior CIA analyst, who commented on the irony of the Bush administration’s going to war based on claims that the Iraqis possessed weapons of mass destruction, while at the same time betraying a deep-cover operative who was running a network of informants providing actual information about WMDs. McGovern noted that such networks can take ten years or more to develop. The reason for obtaining deep-cover agents is that the only people who have access to the kind of data the CIA needs cannot be associated in any way with the intelligence community. “Our operatives live a lie to maintain these networks and do so out of patriotism,” McGovern explained. “When they get blown, the operatives themselves are in physical danger, and the people they recruit are also in physical danger, because foreign intelligence services can make the connections and find them. Operatives like Valerie Plame are real patriots.”

Researchers state that Karl Rove is an undisputed, heavyweight champion of political assassins, who learned a vast repertoire of dirty tricks under the tutorship of Republican slash-and-burn master Donald Segretti. In 1970, as Segretti’s nineteen-year-old apprentice, Rove stole some letterheads from Illinois Democrat Alan Dixon’s campaign officer and distributed fake flyers promising rallies with free beer, free food, and a good time. During the 1972 presidential campaign Rove was at Segretti’s side when they planted false stories about the popular Democratic candidate Senator Edward Muskie’s wife being an alcoholic and about the senator having made an ethnic slur against New Hampshire’s French Canadian population. In addition, they forged letters on Muskie campaign letterhead and disrupted rallies and fund-raising dinners. After Muskie dropped out of the race, they focused on World War II hero George McGovern and portrayed him as a left-wing radical. Segretti was later convicted as a Watergate conspirator, but Rove had learned his lessons well. On August 10, 1973, a Washington Post article reported on how the twenty-two-year-old Rove was touring the nation providing “dirty tricks” training seminars.

In the 2000 GOP primary Rove smeared Senator John McCain, another American war hero, by accusing him of betraying his fellow U.S. prisoners in the notorious North Vietnamese “Hanoi Hilton” prison. McCain’s wife came under attack for alleged drug abuse, and suggestions were made about the senator’s being homosexual. In the South Carolina primaries Rove instigated a push poll that asked voters if they would be likely to vote for McCain knowing that he had fathered an illegitimate black child. Rove was aware that McCain was campaigning with his adopted Bangladeshi daughter and that the less-than-astute voters would make the despicable association.

Defaming a veteran of Vietnam who had undergone torture and deprivation and survived to become a candidate for the U.S. presidency seemed to be only a warm-up for Rove’s insidious coaching of Republican candidate Saxby Chambliss in the 2002 Georgia Senate race. Rove masterminded Chambliss’s attack on Senator Max Cleland, who had lost both legs and an arm in Vietnam, for “breaking his oath to protect and defend the Constitution.” Chambliss, who did not enter military service because of a bad knee, issued a press release stating that Cleland had voted for an amendment to the Chemical Weapons Treaty that eliminated a ban on citizens of nations accused of sponsoring terrorist activities being on UN inspection teams in Iraq. The amendment had passed with Republican support and a majority vote, but Rove ingeniously manipulated Georgia voters into seeing Cleland’s vote as unpatriotic and assured Chambliss’s victory.

During the 2004 presidential race, Rove received the overwhelming nomination as the likely mastermind behind the misleading “Swift Boat Veterans for Truth” television ads that attacked yet another decorated war hero, Senator John Kerry.

In June 2005 Rove uttered the words that had angry Democrats demanding an apology: “Conservatives saw the savagery of 9/11 attacks and prepared for war; liberals saw the savagery of the 9/11 attacks and wanted to prepare indictments and offer therapy and understanding for our attackers.” Since both liberal and conservative senators had voted unanimously to authorize the use of military force against the terrorists in retaliation for the September 11, 2001, World Trade Center and Pentagon attacks, Rove’s statement seemed clearly devised to divert attention from the mess he was in with the Valerie Plame incident. Individuals other than Democrats were offended by such a remark. Families of September 11, a nonprofit organization founded by survivors of those who were killed in the 9/11 terrorist attacks, issued a statement demanding that Rove cease his attempts to “reap political gain in the tragic misfortune of others.”

Once again, the Bush administration defended Rove by stating how puzzled they were that anyone could take offense at such an “accurate” analysis of the varying philosophies in the war on terror.

In September 2003 President Bush, in reference to the Valerie Plame incident, said that he didn’t know anyone in his administration who would leak classified information but that “appropriate action” would be taken if such were learned to be the case. On July 18, 2005, President Bush added that if anyone had committed a crime, “they [sic] will no longer work in my administration.”

In his memoir, Courage and Consequence (2010), Rove devotes three chapters to his grand jury appearances in the Valerie Plame scandal. In his grand jury testimony, Rove said that he had learned of Plame’s CIA affiliation from a number of journalists and not from government officials. It was true, he testified, that Robert Novak informed him in July 2003 that he planned to write an upcoming column stating that Plame worked for the CIA, but Rove insisted that he had already heard the allegations from other journalists, whose identities he could not recall. Rove also testified that he had also heard of Plame’s affiliation with the CIA from I. Lewis “Scooter” Libby. Libby, Rove said, had heard about Plame and the CIA from journalists.

On March 6, 2007, Libby was indicted for having spoken to a senior official in the White House on or about July 10 or 11, 2003, who advised him that Robert Novak would be writing a column in which Joseph Wilson’s wife was identified as a CIA employee. Libby was sentenced to thirty months in prison, fined $250,000, and given two years supervised release. Although it has never been confirmed by Special Counsel Patrick Fitzgerald, it was widely circulated that Karl Rove was the senior officer identified in the indictment as “Official A.” Libby’s sentence was later commuted by President George W. Bush.

After Rove left the White House in 2008, he was hired as a contributor for the Wall Street Journal and as a political analyst for Fox News. He also served as an informal advisor to John McCain in McCain’s campaign for the presidency in the 2008 election, and he has spent a great deal of time on the road giving speeches to colleges and other groups.

Perhaps this bit of trivia indicates an additional peek into the man’s psyche. Karl Rove is Norwegian American. While many Scandinavian Americans are content to tease one another with “Ole and Lena” jokes, it has been noted that Rove has an obsession about the duplicity of the Swedes, who took control of Norway in 1814. According to Bob Woodward’s Plan of Attack, it was this unreasoning distrust of Swedes that caused Rove to hate the United Nations weapons inspector Hans Blix, who is Swedish, and to negate Blix’s report that there were no WMDs in Iraq.