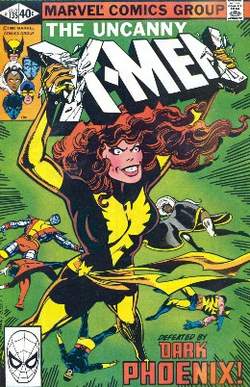 (pop culture)
Lord Acton's dictum that absolute power corrupts absolutely is aptly illustrated by the rise and fall of the supremely powerful cosmic being called Dark Phoenix. The creation of the classic writer/artist team of Chris Claremont and John Byrne, Dark Phoenix represents the unrestrained id of Jean Grey, the telepathic/telekinetic superheroine known as Marvel Girl, who had been fairly unassuming since her inception in X-Men vol. 1 #1 (1963). While piloting a space shuttle to Earth after a space mission, Grey is lethally irradiated. Fortunately, she also encounters the Phoenix Force, a cosmic entity that apparently revivifies her after a crash-landing in New York's Jamaica Bay. Grey's friends, the outlaw mutant superheroes called the X-Men, fear the worst—until Grey rises from the water in a brilliant blaze of fire shaped like the burned-then-reborn bird of ancient Egyptian legend: the Phoenix. Along with her new superappellation, Grey acquires a dynamic new costume, an aerobics-instructor-like green catsuit (X-Men vol. 1 #99–#100, 1976). As Phoenix, Grey steadily ascended toward omnipotence while sliding inexorably into amoral, unbridled violence. The cause was the ancient, immortal Phoenix Force that now possessed her. Exploiting the Phoenix entity's inexperience with human emotions, the mutant villain Mastermind soon manipulated Grey into joining the worlddominating Hellfire Club, thereby blowing out Grey's self-imposed “psychic circuit-breakers,” which kept her rising power-levels, along with the Phoenix Force's worst impulses, in check. Grey abruptly became Dark Phoenix, her costume symbolically morphing from placid green to demonic red. Unfettered by conscience, Dark Phoenix psionically struck down Mastermind, then took a savage interstellar “joyride” that extinguished the D'Bari civilization. She then returned to Earth's solar system, where neither the X-Men nor the powerful Shi'ar Empire—whose military was determined to avenge the D'Bari—can stand against her. Fortunately Dark Phoenix retained a spark of Grey's humanity and opted for suicide, apparently ending Grey's life. This fatal denouement for such an integral character was highly unusual for the superhero comics of the day, and it truly caught readers by surprise when it was unleashed in X-Men vol. 1 #129–#137 (1980). The bewitchingly sexy cosmic villainess has proved durably popular, spurring numerous new appearances, including a lengthy run of early 1980s Uncanny X-Men comics featuring a replica of Jean Grey named Madeline Pryor, who not only married Grey's teen sweetheart Scott (Cyclops) Summers, but also served as a vessel for the Phoenix force. Grey herself returned when it came to light that the Dark Phoenix entity that committed suicide had actually been only a duplicate; the real Jean Grey was found in suspended animation and revived in Fantastic Four #286 (1986). Though many fans regarded Grey's return as a betrayal that undercut her dramatic, Sydney Cartonesque sacrifice, Grey remained a popular character, no doubt owing in part to the possibility that Dark Phoenix might one day run amok once again. Against that possibility, Rachel Summers—the alternate-future daughter of Jean Grey and Scott Summers— eventually became the custodian of the unkillable Phoenix Force in 1992. Dark Phoenix has so far served to supplement Rachel Summers' already-formidable psionic talents, but she has yet to wipe out entire planets. Dark Phoenix finally reached a mass television audience in the third season of FOX's popular XMen animated series (1992–1997). Voiced by Canadian actress Catherine Disher, the tragic Dark Phoenix of the original 1980 Claremont-Byrne saga survived more or less intact. Back in the comics, the “rebooted” version of the X-Men presented in 2001's ongoing Ultimate X-Men series (written by Mark Millar and Chuck Austen and illustrated by Adam Kubert, Chris Bachalo, Esad Ribic, Kaare Andrews, and others) brings the Dark Phoenix saga forward into the new millennium. Like the original Claremont-Byrne iteration, Millar's Dark Phoenix takes Jean Grey on a journey to godhood, though her impulses now appear loftier. “I want to use these gifts to benefit the world,” Grey declares to her mentor Charles Xavier, ready to use her new powers to literally raise the dead. But after receiving a stern browbeating from Xavier, she backs away from wreaking such well-intended havoc on the world, tamping her vast energies down, at least temporarily (Ultimate X-Men #23, 2002). Whether or not Dark Phoenix will motivate Grey into assuming godhood remains to be seen. Her return, however, seems certain.
The Supervillain Book: The Evil Side of Comics and Hollywood © 2006 Visible Ink Press®. All rights reserved.

Feedback
Flashcards & Bookmarks ?
Please log in or register to use Flashcards and Bookmarks. You can also log in with
Flashcards ?
My bookmarks ?
+ Add current page to bookmarks
Mentioned in ?
References in periodicals archive ?
Shipp was last seen reprising her role as Storm in the recently-released film X-Men film 'Dark Phoenix'.
Alexandra Shipp joins Arnold Schwarzenegger, Michael Fassbender in 'Kung Fury 2'
When it comes to some British male celebs, "Dark Phoenix" stars Michael Fassbender and James McAvoy said they've both been mistaken for Ewan McGregor, while Michael Sheen has been mistaken for a host of other celebrities.
Double take: Celebrities take mistaken identity in stride
Film classic The Shawshank Redemption will be shown on July 24, with X-Men Dark Phoenix being shown on July 25 and to July 28.
Shows on at cinema
X-MEN: DARK PHOENIX (12A) HH HHH DON'T be afraid of the Dark Phoenix (Sophie Turner, pictured).
also showing
1 / 2 Michael Fassbender has played Magneto in 'X-Men' since 2011's 'First Class.' He is pictured here in 2014's 'Days of Future Past.' (Supplied) 2 / 2 Sophie Turner plays Jean Grey in 'X-Men: Dark Phoenix.' (Supplied)
X-Men's Michael Fassbender prepares for his last stand
X-MEN DARK PHOENIX (12A): After she comes into contact with a cosmic force, something awakens inside Jean Grey that makes her extraordinarily strong - but also highly destructive.
What's On
Meanwhile, the cast of Dark Phoenix, including Jessica Chastain, Michael Fassbender, James McAvoy and Sophie Turner, joins James for a double-decker bus tour of London.
DODGE CITY; AFTER CONQUERING THE US, CHAT SHOW HOST JAMES CORDEN RETURNS TO LONDON TO TAKE ON A NEW CHALLENGE... ALL-STAR CELEBRITY DODGEBALL
The writing may have been on the wall after neither an X-Men movie ("Dark Phoenix") nor a Godzilla movie ("Godzilla: King of the Monsters") could get moviegoers enthusiastic enough to turn out.
Franchise fatigue continues with 'Men in Black' and 'Shaft'
Hollywood may have had a disappointing start with damp squibs such as 'X-Men: Dark Phoenix' and 'Godzilla: King of the Monsters' not doing much in terms of box office numbers, the season has only just begun, with directors such as Quentin Tarantino coming up with 'Once Upon a Time in Hollywood', while Jon Favreau is bringing the beloved Disney classic 'The Lion King' back to life as a live-action remake.
Podcast: Must-watch summer films of 2019 across Hollywood and Bollywood
DARK PHOENIX THE final X-Men movie, which stars Game of Thrones actress Sophie Turner, was not only savaged by critics but had the weakest openings of all the films in the franchise.
TRENDING
The X-Men bid farewell to Fox before flying off to their eventual new home in the Marvel Cinematic Universe with a second big screen take on the Dark Phoenix storyline.
Little spark in second take on classic tale..
The Scottish star, 40, reprises his role of Professor Charles Xavier in Dark Phoenix, which stars Game of Thrones actress Sophie Turner as Jean Grey.
ALL GEEK TO ME; THE LATEST GAMING, COMICS & TECH TRENDS