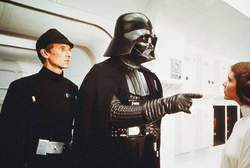 Feedback
Flashcards & Bookmarks ?
Please log in or register to use Flashcards and Bookmarks. You can also log in with
Flashcards ?
My bookmarks ?
+ Add current page to bookmarks
Mentioned in ?
References in periodicals archive ?
Ian Martin runs the ballooning team for the fiesta and co-piloted Darth Vader on its Bristol flight.
May the upward force be with you; FESTIVAL
One such history-building exercise is about Darth Vader. There is an ongoing comic series about the Sith Lord with tales about the time when he was serving the Emperor.
'Darth Vader' Comics Hint At Sith Lord's Path To Immortality
The account also confirmed they are aware of four people going to hospital following reports they had taken the Darth Vader pills.
School children risking their life taking deadly Darth Vader pills containing MDMA, ketamine and cocaine bought from Dark Web; Police have had reports of youngsters falling ill and unconscious after taking it
Star Wars legend Dave Prowse - the original Darth Vader - has gone in front of the camera for the last time
VADER HANGS UP HIS CAPE WITH VIDEO FAREWELL
Despite him having already appointed Darth Vader, Satan and Trevor Jordache off Brookside.
Donald and the Cabinet from Hell Apparently there are still a he could find jobs for impeached at any rate
Recently in Odessa, the statue of Lenin was refashioned into another villain, Darth Vader of the Star Wars fame.
Lenin is now Disney's Darth Vader
KyEV (CyHAN)- Ukrainian sculpture artist Alexander Milov turned Lenin monument, located in Odesa city of Ukraine, into Darth Vader, which is commonly known as Dark Lord in Star Wars movies on Saturday.
Lenin monument turned into 'Dark Lord'
Among the newest items in the line, available in R2-D2, C-3PO, Darth Vader and Storm-trooper varieties, are a 10-inch plate selling for a suggested $4.49 and a 13-ounce iconic tumbler selling for a suggested $8.99 and featuring a dome lid and straw.
Zak Line incorporates Star Wars characters
In results that are hardly surprising, FiveThirtyEight (led by data guru Nate Silver) found that Star Wars characters such as Luke Skywalker, Han Solo, Yoda, Boba Fett, and Darth Vader are leading every single potential 2016 presidential candidate, including but not limited to Hillary Clinton and famous Catholic Joe Biden.
Luke, I am your president
2 ( ANI ): The enmity between famous fictional father-son duo Darth Vader and Luke Skywalker has been named the most memorable in a poll of film fans.
Darth Vader, Luke Skywalker film rivalry named most memorable of all time
But Nakheel's Brendan Jack remembers the day the firm had to put the block on one potential purchaser's plans to build an island shaped like Darth Vader's helmet.
Darth Vader island among requests on Dubai's 'The World' islands..