[′dad·ə di‚splā]
(computer science)
Visual presentation of processed data by specially designed electronic or electromechanical devices through interconnection (either on- or off-line) with digital computers or component equipments; although line printers and punch cards may display data, they are not usually categorized as displays but as output equipments.
McGraw-Hill Dictionary of Scientific & Technical Terms, 6E, Copyright © 2003 by The McGraw-Hill Companies, Inc.
The following article is from The Great Soviet Encyclopedia (1979). It might be outdated or ideologically biased.

an output device for computer data (usually the results of processing of input data) that presents the information in a form suitable for visual perception and decision-making by a person (for example, in the form of alphanumeric text or a map, table, curve, circuit, or blueprint). Displays are widely used as terminals for digital computers in data transmission systems, in diagnostic systems and teaching machines, in research and the design of many technical devices, in automatic control and design systems, and in signaling and inspection systems (and in similar “man-machine” systems). A distinction is made between individual and collective displays.

The main element of individual displays (Figure 1) is a cathode-ray tube (CRT). The coordinates of characters that are frequently reproduced (letters, numerals, signs, special symbols, and so on) are stored in an auxiliary memory; the central processor of the computer system merely issues an address for such characters, and they are then reproduced automatically on the screen. This kind of display can reproduce a page of book text on the screen in 0.02–0.05 sec. To prevent the image on the screen from flickering, it is reproduced repeatedly (regenerated) at a rate of 20–50 times per sec. Exchange of information with the central processor takes place only when it is necessary to make a change in the image or to transmit the operator’s commands to the processor. In such displays the operator can use a light pencil to erase characters, lines, and portions of a text, to replace elements in circuits and blueprints, to rotate the image in the plane of the screen, and to change the scale of the image.

In addition to ordinary CRT’s, data displays use numerical indicator tubes, multiple-beam tubes for synchronous presentation of several rapidly changing variables, tubes with an optical port (for alignment of a composite background, such as a map of a locality or a blueprint, from a slide projector with the cathode-ray image), and color television tubes. The main drawback of CRT displays is the difficulty of matching the displays with digital computers, which requires extra equipment.

“Plasma panels” are more convenient from the standpoint of compatibility with a digital computer. Such a panel is composed of three glass plates. The middle plate has holes (cells) filled with a mixture of neon and nitrogen, and the outer plates have select lines (parallel semi transparent strips of gold), which are arranged in such a way that each hole lies between two perpendicular lines. When a control voltage (signal) is fed to the lines, the gas in the cells glows, and the glow persists after the control signal is cut off (the discharge is supported by a DC voltage). To clear an element, a signal of opposite polarity is fed to the pair of lines. Matrix fluorescent screens are arranged in a similar manner (the middle plate is coated with spots of phosphor with an area of about 0.25 sq mm). Screens have been developed that use light-emitting diodes (LED’s) and liquid crystals. LED screens are based on the phenomenon of luminescence of certain semiconductors (for example, gallium phosphide and arsenide) when a voltage is applied to them. Liquid-crystal screens are based on the change in the position of the molecules in certain artificial organic substances under the influence of an electric field; this causes a change in the transparency or color of the corresponding portions of the screen. 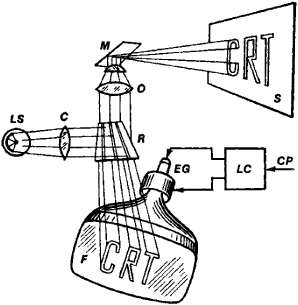 In a collective display, a primary image produced on an intermediate carrier (the phosphor of a cathode-ray tube) is enlarged and projected onto a screen. The resolution and brightness provided by such displays are sufficient only for relatively small screens (with an area of the order of 2.5 sq m); on larger screens these parameters deteriorate. By replacing the phosphor with a thin oil film that is maintained under a constant potential, a film light modulator is produced (Figure 2). When a cathode ray acts 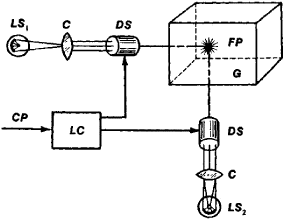 on the film, a charge develops that deforms the film’s surface, producing a raised primary image. Light from a powerful lamp is directed at the primary image by a reflector; when the light is reflected from the irregularities of the oil film, it carries an image of the relief, which is then focused by an objective lens and projected onto a screen. Film-type light modulators provide a high-quality color image on large screens (with areas of up to 200 sq m). Other promising areas are the use of thermoplastic light modulators (similar in design to the film type but using as the primary carrier a material that is first heated to a plastic state) and laser displays (similar to CRT displays, but with a color image transmitted to a large screen by three laser beams of different colors).

The data display devices discussed above provide two-dimensional images. However, in a number of cases—for example, in aircraft landing systems and in the design of automobile bodies—a three-dimensional presentation is preferable. A CRT display can reproduce three-dimensional images in an axonometric or other projection by means of a number of attachments; the lines an observer would not see are erased, and the image can be rotated so that the operator can view it from different sides. No less promising is the use of three-dimensional displays based on holography. New possibilities are opened up by volumetric display in which the image is created in a volume filled with gas (Figure 3) rather than in a plane. Two beams from external light sources are directed into a gaseous medium; each changes the energy state of the gas molecules in such a way that the gas fluoresces at the point where the beams intersect. Upon rapid motion of the beams, a luminous trail appears that is perceived by an observer as a complete image upon multiple reproduction.

Feedback
Flashcards & Bookmarks ?
Please log in or register to use Flashcards and Bookmarks. You can also log in with
Flashcards ?
My bookmarks ?
+ Add current page to bookmarks
Mentioned in ?
References in periodicals archive ?
We tested these features using an experiment that randomized participants to view a website that (a) had as its starting point either the quick links home page or the then-current MPF home page, and (b) presented plan data either via a simplified data display or via the then-current MPF data display.
Can a more user-friendly medicare plan finder improve consumers' selection of medicare plans?
* Enterprise video for corporate communications and data display
Symon Communications, Inc
Typical applications include: light industrial environments, flight simulators, laboratories, data display and entry terminals, point-of-sale terminals, and in office situations involving "severe" use.
Monitors keep a low profile. (Briefs)
The unit comes with a USB connecting cable, batteries, a neck lanyard with safety break-a-way and software for downloading and basic data display. The unit is plug-and-play and has a variety of optional sensors, including Ph, dissolved oxygen, barometer, light sensor and voltage-current.
Log data in and out of the lab. (New Products)
Both systems use identical software and a touch-sensitive panel for data display and operator interaction.
Sand Moisture Control System
Data display is a full six digits with 0.01 percent resolution.
Signal conditioning instrument
S-PLUS includes a suite of flexible and sophisticated data display techniques to transform quantitative information into easy to understand charts, using multiple tabbed pages.
S-PLUS(r) 6 For UNIX
The data display can be customized to suit the user's needs for performance information.
StorageTek REELs Them In
* Data Display Europe's has secured a contract to install new FIDS displays at the UK's Newcastle Airport.
FIDS Focus: In Brief
CO, are producing what they say will be the next generation in data display devices.
Displaytech, Inc
These only scratch the surface of data display genres; in Information graphics, Robert L.
Conflicting standards for designing data displays: following, flouting, and reconciling them
Review the five major components (titles and labels, scales, spacing, shading and color, and data display).
Too good to be true